Like his father before him, Bennosuke trains to be a samurai, a killing machine sworn to carry out his lord’s commands, no matter how vain, narrow, or immoral they may be. To fail means dishonor, redeemable only through suppuku, ritual suicide; but success means stifling compassion, sensitivity, trust, or emotional connection. 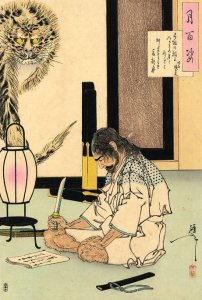 General Akashi Gidayu preparing to commit seppuku after losing a battle for his master in 1582. He has just written his death poem. (Courtesy Wikimedia Commons.)

Remarkably for a thirteen-year-old boy, or, as David Kirk so vividly describes, just about anyone in seventeenth-century Japan, Bennosuke rebels against this choice. Following his father’s instructions but also the teachings of his uncle, a monk who raised him during long years of parental absence, the boy believes he can be a loyal samurai and a moral, righteous, feeling man.

Bennosuke’s inner struggle is the premise, but there’s as much action as introspection here. Kirk sets Bennosuke’s search within the context of outward battles, whether between father and uncle for the boy’s soul and future, against enemies who bait father and son into mortal combat, or to survive the political tempests of feudal Japan.

I have no patience for hidebound warrior codes or the concept of killing to save face, but I read Child of Vengeance despite its subject matter. I’m glad I did. Not only does Kirk know his ground and how to make it coherent and understandable, he presents moral dilemmas inherent in the samurai way of life. Bennosuke never asks himself whether he’d have preferred to be a peasant, but the story plumbs both sides of this question.

The peasant, forbidden to bear arms, will never have to defend his honor–it’s assumed he has none–nor go to war. However, war will come to him, and he pays, either in taxes or by being in the wrong place at the wrong time. Is it better to be able to defend yourself, even in someone else’s service? Is the right to bear arms, and the duty that goes with it, a freedom or a curse? The only characters Bennosuke meets who think for themselves, starting with his uncle, aren’t samurai–samurai can’t afford that luxury. So who’s happier in the end, warrior or peasant?

There’s never a dull moment here, and Kirk writes with psychological insight, always a pleasure. However, too often, he tells you what the characters feel–that old devil explanation, again–and Bennosuke’s insights toward the end seem unearned, as if the author has gotten ahead of his character’s development. Sometimes, too, the language feels laden with portent or skating just this side of cliché. Consider this passage:

History is changed by the smallest of things; a single drop of rain, say, is blown by a freak gust of wind into the eyes of a ship’s captain, so that in the blink that follows he misses the sign of the reef ahead. . . . What left Arima’s mouth was no more than a pale green gob of phlegm, but within it was the catalyst that put fire in Bennosuke’s soul.

I like the images, yet I’ve read this before in other guises. Maybe the weak point is that the Arima in the passage fights for an archvillain clan, who–unlike anyone else in the novel–show little depth.

But these are relatively small issues, and I believe David Kirk will write better novels. Meanwhile, Child of Vengeance is worth your time.

1 thought on “Blood and Honor”