Like anyone else, I get a kick out of a novel in which I see pieces of my past laid out like a buffet. Addie Baum, the girl of the title, grows up in the first decades of the twentieth century, struggling to make a life she can call her own. She fights to stay in school, have a satisfying career, befriend other young women who dream of being more than baby makers, and choose her own husband, all of which sets her against her shtetl parents.

It’s those parents who seem most familiar, especially Addie’s horrid mother, who reminds me of my paternal grandmother (the one who said, at my bar mitzvah, “Very nice, Larry. You made only one mistake.”) Addie’s world opens when she visits a settlement house, a community meeting place common in large cities at the time; my mother used to speak fondly of one she belonged to in Greenwich Village. 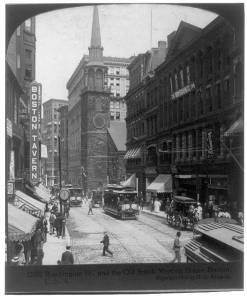 Most important, Diamant’s Jewish characters feel Jewish without effort. If you think that sounds silly, or that I’m paying her an empty compliment–particularly given her many books on Jewish themes–I’m serious. It’s a pet peeve of mine when authors paste ritual observance onto characters who have no Jewish inner life, outlook, belief, or disbelief, and pass that off as authentic. A recent example was The Mapmaker’s Daughter, by Laurel Corona, a novelist I otherwise admire.

So what’s not to like about The Boston Girl? Well, a few things.

For one, as I said, it’s a buffet, carefully selected goodies in vignettes, some quite brief. The setup is an elderly Addie telling her life to her twenty-two-year-old granddaughter, and though that kind of narration can be deadly and clumsy (think Wuthering Heights), for the most part, Diamant avoids that danger. However, she’s got a lot of ground to cover, and at times, the narrative skims the surface. Some chapters seem to exist to express homilies, like how kindness means more than intellectual accomplishment, or “a girl should always have her own money.” I couldn’t agree more, but it seems that Diamant strives for a feel-good story at the expense of depth.

The Boston Girl is nominally historical fiction, yet history feels very much in the background, something to slide by rather than live in. The only event that feels immediate or important is the influenza epidemic of 1919, whereas World War I or the Sacco and Vanzetti case or the Great Depression merely rate honorable mentions.

My favorite parts recount Addie’s travails working for a newspaper for a lecherous, lazy, alcoholic boss. In 1920s newsrooms, the few female reporters grudgingly hired for the home and society pages were targets for condescension, sexual harassment, or both. Diamant strikes a pitch-perfect note between her heroine’s eagerness, desperation to be somebody, and knowledge that her fellow man shouldn’t always be trusted.

I also liked Addie’s friends from the settlement house, particularly Filomena, a young Italian woman who wants, against all odds, to be an artist, and has the gift for it. The feminist message comes through loud and clear in these portrayals, as in Addie’s life. Diamant does her women a great service by letting them talk about many subjects other than men, though of course, there’s also romance.

Is The Boston Girl really a novel, or a short-story collection of uneven quality? I’m not sure. As a buffet, it’s not a feast, but a nosh.