You may not want to read this book, but you should at least know what it says. And what Ian Morris says is “a paradoxical, counterintuitive, and frankly disturbing notion”: that throughout human history, war has made the world both safer and richer. He distinguishes two types of war, productive and nonproductive, so the argument is somewhat finer than it first appears. But you get the rough idea.

As someone who entered his teenage years when this country abandoned the promise of the Great Society to fight a pointless war in Southeast Asia, and when civil rights marchers were being beaten, jailed, and murdered simply for demanding their constitutional right to vote, on the face of it, I have a hard time swallowing Morris’s theory.

Even so, he persuaded me more than I thought he would. (I also have to say that I  enjoyed his witty, pungent prose.) I can believe that the Roman Empire, by subduing warring tribes, ended raiding and pillaging so that the odds of dying a violent death fell substantially over time. The same advance, Morris argues, occurred in ancient China and India, whereas in medieval Europe, it didn’t. Why? Because the rulers of Rome, China, and India–or, more precisely, their administrators–understood what the later European warlords didn’t, that plunder failed to pay in the long run. 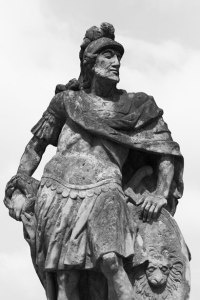 What paid was enforcing civil order and charging for the service, which Morris calls “a racket, but it may still be the best game in town.” The racket worked if trade thrived, peasants fed the population and paid taxes, preferably collected by honest agents, because corruption hurt the state. However, civil order depended on force, as did repelling threats from without, so much of that efficiency and created wealth went toward military power. The difference between long-lasting empires and transient warlords was the willingness to restrain greed and incompetence and fight (mostly) those wars that strengthened the state, the productive ones. Take this to its logical conclusion, and you can see why empires end when maintaining their military advantage either becomes too expensive or physically impossible, and they risk fighting the wrong wars. As he points out, the United States faces this dilemma right now.

Where Morris falls short, I think, is when he starts sounding like a think tank, assuming that because the big picture makes sense (sort of), the little pictures must too. For instance, only once does he mention, in passing, civilian control of the military, the only means available to prevent those nasty, unproductive wars. That essential democratic concept must figure in the debate over how, or whether, democracies conduct wars against insurgents. Nor am I warmed all over by the idea that had Hitler won World War II, his empire would have been too large and piratical to sustain. I don’t care how many computer models have proven this; it’s no comfort.

I also mistrust averages, especially on a global scale. You may have heard of this paradox: Eight women throw a baby shower for a friend, but does that mean that all nine women average one month’s pregnancy? Of course not. So when I read that, over centuries, war has enriched the world by such-and-such percent, I want to know who got the money.

To his credit, Morris faces many ugly implications of his theory straight on. He repeatedly acknowledges that no victim of war would ever be cheered to think that the world had just been made safer or richer. But the most disturbing aspect, which he examines with such tact and grace that I have to applaud, is how violence seems ingrained in the human species and its primate relatives. His description of primate life is fascinating and eye-opening, and he damningly challenges Margaret Mead’s findings of peace and love on Samoa. (Apparently, her field research was much shorter and less thorough than she allowed.) I also liked his depiction of how the Soviet Union, built on bloody revolution and murder, peaceably dismantled itself about seventy years later.

War! What Is It Good For? is a provocative, important book, and I’m glad I read it.