It’s Paris in the late 1870s, and the three van Goethem girls are living a hair’s breadth from destitution. Their father has just died, and their mother, a laundress, is too friendly with the absinthe bottle. With the landlord beating at the door, the eldest daughter, Antoinette, a mere teenager, brings the next oldest, Marie, to audition for the ballet. If eleven-year-old Marie makes the cut, she’ll get a stipend, which, however meager, will help pay the rent. Meanwhile, Charlotte, the youngest, longs to be a dancer herself, but more for the dance, not the money.

But even if the sisters enter the ballet company, there are slippers and skirts to buy, plus extra lessons without which even the most talented newcomer can’t hope to compete with her more experienced peers. Not only won’t the stipend go that far, the long hours of practice and, if she’s lucky, rehearsal for performance, drain many hours from the day. There’s little time for paying work on the side, assuming a young girl could find a job.

Unless, of course, a well-to-do gentleman who subscribes to the ballet is willing to be her patron, in which case the ballet slippers, skirts, and lessons are paid for. Perhaps too, he whispers in the director’s ear, and voilà, his protegée receives a promotion to the next of many levels within the ballet corps. Naturally, however, patronage doesn’t come for free.

This is the life that Cathy Marie Buchanan explores in The Painted Girls, and what a heart-rending tale it is. As Marie laments more than halfway through the novel,

I want to put my face in my hands, to howl, for me, for Antoinette, for all the women of Paris, for the burden of having what men desire, for the heaviness of knowing it is ours to give, that with our flesh we make our way in the world.

Marie’s one of the lucky ones. She has Antoinette to lean on, and a nearby bakery where she earns a little on the side, as well as the shy smiles of the baker’s son. Also, a painter named Degas, who prowls the ballet scene, asks Marie to model, which brings in a few more francs. But tenuous circumstances change quickly, and the van Goethems, like poor people everywhere, lack the resources to cope. Consequently, The Painted Girls shows the not-so-belle époque in its daily squalor, vividly demonstrating the social divide between artist practitioners from patrons, and the latter’s prejudices and illusions. 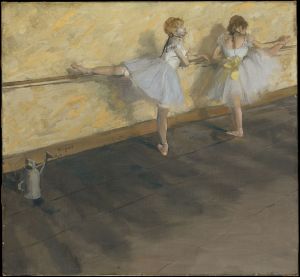 I like the storytelling here very much (except the last forty pages or so, which sometimes dip into melodrama). I also like how the author has depicted Marie, her ballet classmates, her patron, and Degas, with subtle complexity and depth. However, I don’t understand why Antoinette falls prey to a masochistic love affair–why does he appeal to her?–though once it gets going, her blind devotion feels absolutely real and chilling. Charlotte, the youngest sister, is a nonentity, a sketch.

Buchanan has painstakingly researched the van Goethem sisters and Antoinette’s lover, all of whom existed, and of course Degas and a few others. Strangely, though, Buchanan’s Paris is almost completely interior, giving full attention to rooms and, at times, building facades, but not streets. Is this a matter of style? To suggest claustrophobia? It’s also a bit odd that certain contemporary events–the Paris Commune of 1871, for instance–rate no mention, despite their profound aftershocks.

Still, the world of The Painted Girls deserves wide attention, and so does this good novel.