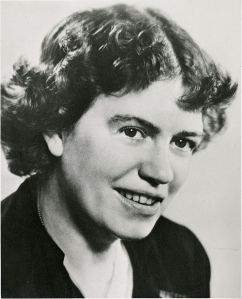 Suppose that three anthropologists, a husband-and-wife team and another man, cross paths in New Guinea in 1931. The husband, a magnetic, vicious boor, is jealous of his wife’s fame and has myriad ways of expressing it. His animosity grows sharper as he senses the other man attracting her with two qualities he sorely lacks, simple kindness and the ability to play with ideas. But they’re scientists, so their love triangle seethes with conflicting views about human nature, reflecting what they observe about the indigenous peoples they’re studying and how they themselves behave, so that scientific theory becomes practice. And throughout this chillingly tense, enthralling novel, it’s fair to ask what civilization means and whether Westerners have a monopoly on it the way we tell ourselves we do.

King has closely based Nell Stone, the woman of the triangle, on Margaret Mead, and the men, on two of her husbands. But don’t think for a second that their actual history predicts King’s narrative or the themes involved. Yes, she portrays Mead’s exploration of tribal sexual mores and the lives of children, findings controversial then and now, which have, incidentally, influenced American theories of child-rearing. (It was no coincidence that she chose Benjamin Spock to be her daughter’s pediatrician.) But scientific history aside, it’s the relationship between Nell and her husband, Schuyler Fenwick (known as Fen), and how Andrew Bankson comes between them, that give Euphoria its remarkable breadth.

Take, for instance, the differences between Nell and Fen:

Fen didn’t want to study the natives; he wanted to be a native. His attraction to anthropology was not to puzzle out the story of humanity. . . . It was to live without shoes and eat from his hands and fart in public. He had a quick mind, a photographic memory, and a gift for both poetry and theory–he had wooed her with these qualities day and night for six weeks on the boat from Singapore to Marseille–but they didn’t seem to give him much pleasure. His interest lay in experiencing, in doing.

For her part, what drives Nell to suffer the hardships of field work is to gather stories about other people and return home to tell them. She hopes to find a loving audience, much as she had wished her parents would pay attention to her when she was little. More important, though, she believes “that somewhere on earth there was a better way to live, and that she would find it.”

The struggle between them, with Bankson as mediator, sounding board, and, eventually, equal participant and catalyst, plays out in so many facets of life that Euphoria held me spellbound, in awe of King’s breadth of vision. To name only a few themes, the narrative reveals the anthropologists’ conflict while hashing out the nature of science, culture, feminism, violence, sex, power, exploitation, greed, selfishness, and what it means to understand someone else.

And to give you just a hint about the depth of this story, euphoria refers to how gratifying that understanding feels. But, like all euphoria, it’s brief, whether as friend, lover, or scientist. As Nell tells her journal, she loves the start of any new field posting, when she must rely on visual, nonverbal cues to communicate, to which she must pay close attention, or she’ll miss the meaning. Once she gets past that point, though, it’s less exciting and possibly misleading, for in her focus on verbal conversation, what’s really happening may slide by, unnoticed. Words, she remarks, are so often unreliable.

The field work provides a vivid, ever-changing background, in which there’s no such thing as a casual interaction. That’s another of this novel’s pleasures, the window on how anthropologists go about gathering information (or did in the 1930s). As a former Peace Corps volunteer, I’ve always liked good cross-cultural stories. Euphoria is that, and a lot more.

1 thought on “A Famous Life in the South Pacific: Euphoria”