Montreal, 1946. A young Jewish woman named Lily Azerov, escaping from Europe via Palestine, steps off a train, expecting to meet her fiancé, a man she’s never seen. But at the train station, after one look at Lily, he decides he doesn’t want her, so his brother marries her instead. 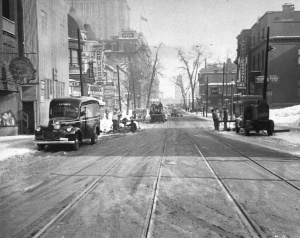 From this arresting premise comes a richly layered, marvelously observed novel about deceit, betrayal, and (of course) abandonment. Though at first seemingly the victim, Lily never really joins her new family, and she winds up enacting her own betrayal, disappearing from Montreal without a trace. Lily leaves behind a three-month-old daughter, Ruth; a large, uncut diamond; and a diary in Yiddish that, like her name, may or may not be hers. Ruth’s father, aunt, uncle, and grandmother do their best for the abandoned child and answer her innocent questions about her origins; she could never say she went unloved. Quite the contrary.

But as Ruth gets older, she receives the occasional birthday package, always a beautiful rock specimen from various places in Canada, with time, date, and temperature, but no signature attached. Naturally, the girl becomes more curious, less accepting of her relatives’ explanations, more determined to learn the truth about her mother. Do they know more than they’re saying, or is it really a mystery to everyone? That’s the problem, but it goes much deeper. Told from several vantage points (though mostly Ruth’s), The Imposter Bride recounts how each person has his or her own reasons to feel abandoned and betrayed, and how these experiences have blinded them to their own deceptions, of themselves and others.

I got lost in this web occasionally, because Richler jumps back and forth in time. But her narrative always sorts itself out, and her moment-to-moment exploration of what goes said and unsaid reveals a keen grasp of psychology and portrays well-rounded characters. Several times, I had to laugh while shaking my head at familiar Jewish inflections and perspectives, which Richler captures perfectly. I’ve never met these people, yet I know them.

Richler’s prose is simple, depending as much on the states of mind she evokes as on the imagery she sparingly but tellingly deploys. Here’s an example, from when Lily first arrives in Montreal and shuts herself in her room, fearing to go out.

It was as if the world outside her bedroom was a stilted play she’d walked into and couldn’t walk out of again, a dream she couldn’t wake from, where everything was menacing in an intangible, slightly surreal way. She hadn’t felt this way during the war, when the dangers that she faced were real. Had she felt it then, she would not have survived, she thought; she would have given herself away with the sort of anxious glance or gesture that had been fatal to so many.

Why she hunkers down goes beyond the shock and trauma to which her new family at first ascribes her aloof unfriendliness. The answer is no great surprise, especially after the clues that pop up in the story, so the ending feels predictable and fails to carry the force it might have. The novel makes Lily out to be a stable person, yet it’s hard to imagine anyone sane (a) abandoning a three-month-old infant and then (b) trying to keep in touch by sending her rocks. I also wonder how the characters who’ve been abandoned by spouses can even think about remarriage without obtaining a divorce. But despite these criticisms, The Imposter Bride has so much to say about wanting to belong, recovery from tragedy and humiliation, and the purpose of truth–all told in a gripping, astutely described process–that I still like the book very much.