If I told you that a novel about Stalin’s plans for a second Holocaust will make you laugh out loud, you’d probably wonder whether all this reading I do had tipped me over the edge. But The Yid, whose title merely hints at provocations to come, conducts an irresistible guerrilla war against Russia, the Soviet secret police, and anti-Semitism–inevitably intertwined–as a darkly comic theater of the absurd.

It’s 1953, and though Stalin’s rumored to be dying, the killings and “disappearances” continue unabated, at his orders. The Great Leader has been assembling lists of Jews and collecting rolling stock from the farthest reaches of the empire, preparing for a mass pogrom to rival Hitler’s. Meanwhile, the secret police have been rounding up Jews for torture, “confession,” and murder, and the blood libel has as strong a currency among Russians as ever (the notion that Jews require Christian blood for ritual purposes, specifically to make Passover matzos).

Consequently, one early morning in February, three secret-service thugs enter the Moscow apartment of Solomon Shimonovich Levinson, an actor from the now-defunct Jewish State Theater. I won’t tell you what happens next, only that he surprises his captors:

The reason for denying the humanity of your arrestees and your executees is simple in the extreme: you block them out, because as humans we have little control over our ability to listen. And when we listen–sometimes–we hear what is said. And sometimes this leads to a dangerous bond between the arrester-executioner and arrestee-executee. Nothing good comes of such bonds.

Levinson conceives a bizarre, hopeless plan: to assassinate Stalin and prevent the pogrom from going any further. Levinson’s profession and needling, cynical sense of humor lead people who get swept up in his scheme to wonder whether he’s serious. But he is. And the cast he assembles for his drama (which appears in sections labeled “acts,” occasionally rendered in playscript) includes several memorable performers.

There’s Friederich Lewis, an African-American who fled Chicago (and other places) for the USSR because he believed that racism wouldn’t exist in the Soviet paradise. He speaks fluent Russian and Yiddish, the latter of which allows him to understand and respond to Levinson’s quips and insults. Russians call Lewis “Paul Robeson,” whom they supposedly admire, yet they expect Lewis to be only a half-step above an ape, even though he’s studied Communist theory more coherently than they and is a gifted engineer. In a final absurdity, he must often go about in whiteface to carry out Levinson’s plan; as a black man, he’d stick out, otherwise.

Aleksandr Kogan, a surgeon, regularly faces anti-Semitism, because, in the Russian mind, Jewish doctors are murderers, intent on infecting the population. Yet Kogan feels that dignity under pressure is important, so when ignoring the bigots doesn’t help, he tries to reason with them. Kima Petrova, a young woman who goes out of her way to challenge death, says nothing about herself. But we learn that the police say her mother blew her brains out and left behind a typed suicide note, though she owned no weapon and no typewriter. The typed note was a carbon copy. 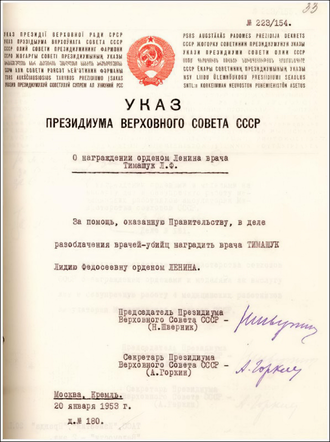 Kogan observes, “Let’s be fair: in our country, you don’t have to be a decent person in order to get arrested.” But it helps. When the secret police warn him that he’s about to be arrested, and that he should make a full confession, Kogan rebuts the accusations one by one. The most absurd is that he’s killed a fellow doctor, another Jew, because, his interrogator says, “Sometimes you have to kill one of your own, so people won’t think you are killing only Russians.” The interrogation follows the same lunatic pattern as random expressions of anti-Semitism, so Goldberg seems to be saying that the paranoia of the bigot and the secret service are one and the same. And with Lewis, the author makes a similar point: People don’t listen to this man, who should be a hero, because that would challenge their prejudice that he’s not really human.

Goldberg made up less of The Yid than it might appear. Stalin’s final purge, which took place shortly before the novel opens, involved accusations against eminent doctors who had treated top party officials. When those patients died, Stalin accused the doctors of murdering them as part of an international Jewish conspiracy to undermine the regime. To assume that he’d plan a national pogrom in response may sound far-fetched. But in his afterword, Goldberg insists that the lists of Jews and the movements of rolling stock have been documented. He dedicates the novel to his parents, whose names were on the lists.

1 thought on “No Holds Barred: The Yid”