Luis de Santángel, chancellor of Aragon and trusted counselor of King Fernando, has a fatal secret, half of which is common knowledge. Everyone knows that three generations back, Santángel’s family was Jewish. Such is the suspicion against so-called conversos, however, that a man like Santángel, despite considerable service to the crown, must never be seen talking to a Jew or found possessing Jewish texts or ritual objects. Consequently, the other half of Luis’s secret is that he’s begun to feel curiosity about his Jewish roots.

But the Inquisition, led by Tomás Torquemada, Queen Ysabel’s confessor, operates a large, many-tentacled network of spies and informers. And when they sweep up a close friend of Santángel’s, a fellow converso, for having secretly observed Jewish rituals and discussed the holy texts, Luis has had enough. Recognizing the danger to himself and his son, and believing that Torquemada’s brutalities are un-Christian behavior and unwise politics, he decides that the Inquisition must be checked. But that is a very tall order, notwithstanding King Fernando’s comparative lack of religious zeal. Ysabel has enough for both.

I like how Kaplan handles the politics, whether royal or ecclesiastical. The characterizations of Torquemada, Fernando, and Ysabel have depth and conviction. It would be too easy to betray them as cardboard villains, but Kaplan takes the high road, showing them as true to themselves. Consider, for example, this passage through Torquemada’s eyes:

The inquisitor general loved the sharp, rough, solid feel of skillfully hewn stones, joined together with or without mortar. They yielded to the will of man only with difficulty, but once shaped, did not budge. They stayed where one placed them. They performed their humble tasks without grumbling or questioning, holding up a building, providing shelter through storms, giving townsfolk a place to gather and pray. Of course, they were not alive, but they were part of God’s creation, and thus worthy of man’s respect. Aye, of man’s wonderment.

Of particular interest is how Fernando, as King of Aragon, is the less powerful monarch, conscious that Ysabel brought more to their marriage than he did. He’s much more interested in conquering the lone remaining Moorish bastion, Granada, than in church affairs, a preference that has disastrous consequences. I also like how the narrative depicts another friend of Santángel’s, a Genoese sailor named Cristóbal Colón. He has the harebrained idea, based largely on religious texts, that he can sail west from Spain and reach both the Indies and Jerusalem. Santángel has arranged an audience for Colón with the monarchs. 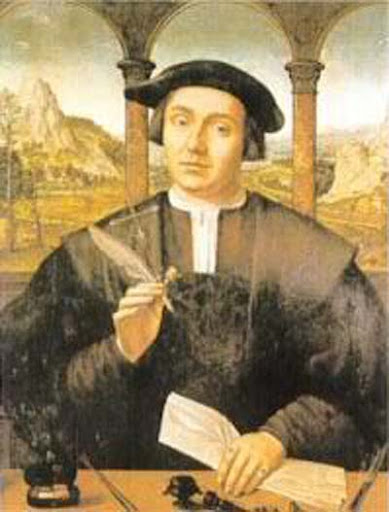 I’m less drawn to the other characters and subplots. Luis, a widower, falls for a beautiful Jewish widow in Granada, Judith Migdal. She’s a silversmith, an extraordinary fact, but one that few people seem to remark on or object to. That idealized glow shrouds much of what she does, for Judith has no apparent faults, and her unerring social skills always save the day. Kaplan re-creates Jewish life in Granada with love and fervor, and I like reading about that. But aside from subtly underlining that the Spanish monarchs are bent on destroying a culture of which they understand nothing and from which they could learn much, its place in the narrative sometimes feels tenuous. The romance is frankly unbelievable and turns on a cliché.

Finally, the narrative seems to suspend itself during the religious debates that move Santángel closer to the faith of his ancestors, and the relative absence of tension feels jarring, given that these discussions could cost the participants their lives. I understand why Kaplan has included these scenes, because he wants to show the natural human curiosity about what is forbidden, and to score a few philosophical and theological points. But I think the novel would have worked better had he focused more on the politics, and I wish those had determined the ending rather than the deus ex machina he employs.

Nevertheless, By Fire, By Water has something to say, and though it reenacts events more than five centuries old, to recount the lengths to which bigots will go unfortunately retains deep relevance. Thirty years ago, when visiting an antiquarian in Toledo who had Jewish ritual objects for sale, I mentioned the expulsion, only to be told that I’d “insulted” his king and queen. By Fire, By Water is as clear a fictional exposure of that attitude as you’re likely to find.