The narrator of this clever, funny picaresque set in ninth-century England tells you what’s what right away. A “vain dissimulator and crafty poltroon,” as he describes himself, Conrad has no use for compassion, empathy, selflessness, altruism, or physical discomfort and believes that bad luck immediately descends if he ever does anything remotely involving them. As it happens, though, Conrad is also a monk — don’t ask — which makes him a little different. Especially from his companion, Brother Odo, who actually takes his vows seriously and seems not to notice that Conrad has broken every commandment and a lot else.

The story begins in a pigsty, appropriately enough, where Conrad and Odo hide from Danish raiders sacking their monastery. In plotting how to escape imminent death or, at best, enslavement, Conrad persuades the credulous, trusting Odo that he has a plan, and no matter what it looks like, it’s for the best and hews strictly to Christian principles. As a consequence, though Odo has moments of doubt, he generally construes Conrad’s most craven acts as noble self-sacrifice, berating himself for not having done as well or for not having realized their true significance. Conrad, he believes, is a paragon of Christian virtue. This is often hilarious, and no matter how many times Conrad lies, appears to ally himself with the Danish invaders, or conspires to enrich himself at others’ expense, Odo sticks by him. 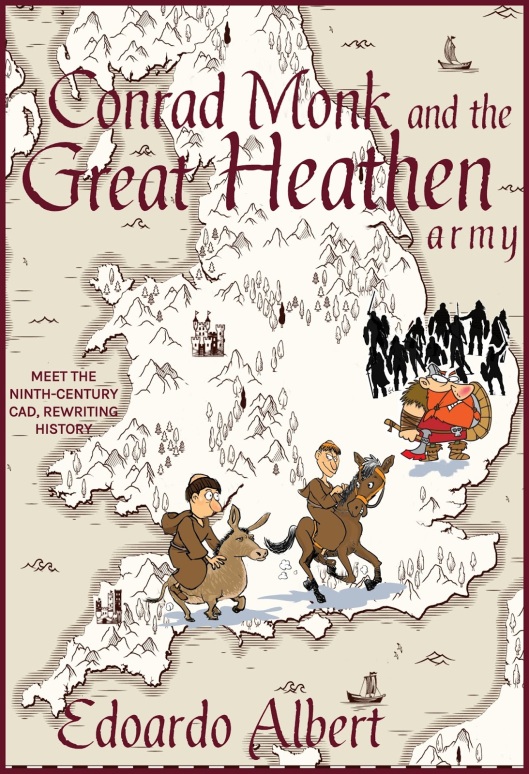 In less inventive hands, Conrad Monk could have been a one-joke story, growing tiresome quickly. Not here. Albert has created a protagonist infinitely skilled at falsehood, flattery, skulduggery, and shameless self-aggrandizement, who cheerfully admits to himself, nay, revels, in his character. And he needs to be that slippery, because “no-and furthermore” happens every other page. How does he escape the Danish warriors approaching the pigsty? Or the mad Saxon king who insists on dying a religious martyr, with Conrad alongside? I won’t tell you — and don’t read the jacket flap — but trust me, these evasions, like many others to follow, are ingenious.

The flap also pretends that Conrad Monk offers a “highly informative trip through the Anglo-Saxon world,” “painstakingly accurate depictions of history,” and “character-driven fiction.” I think even Conrad would blush at those claims. Albert has researched his ground thoroughly — no argument, there — and his descriptions, like the following of a feast, are very evocative:

But of course it dragged on and on, as these things do, with maudlin warriors staring into their cups and telling tearful tales of comrades lost and battles won, while the king’s scop went from telling the tale of Edmund’s heroic forebears through songs of war and dragon-haunted peace to drunken riddles and, finally, blessed incoherence, as his fingers missed the strings of the lyre and his tongue fought a losing battle with his ale-addled wits; he sank into a snoring heap by the fire, a sleep from which not even a volley of thrown bones could wake him.

But come on. Conrad Monk is about as plot-driven as it gets, and nobody will read it to learn about Anglo-Saxon culture, very little of which emerges in its pages anyway. Albert explains that he’s tried to follow historical sources when possible, and that’s commendable. But Conrad’s voice sounds indelibly modern, which is part of the fun, and if you ever ask, “Could his exploits really happen?,” you’re missing the point. Conrad Monk is a funny book. Humor as a theme or approach needs no defense, and dressing it up as something more serious only undermines the joke.

Disclaimer: I obtained my reading copy of this book from the publisher in exchange for an honest review.

1 thought on “Every Commandment Broken: Conrad Monk and the Great Heathen Army”