The night of the 1887 winter solstice, drinkers and storytellers at the Swan, an inn that has served generations of villagers hard by the Thames in Oxfordshire, witness an event capable of stirring the mind for generations. A badly injured, comatose man is dragged in with a child, a four-year-old girl, dead, to all appearances. The revelers immediately send for Rita Sunday, their exceptionally gifted nurse practitioner, who tends the wounded man and checks the girl’s vital signs. A shake of Rita’s head tells everyone what they’ve already feared. And yet, as the nurse studies the girl laid out on a table, she’s less than absolutely certain. 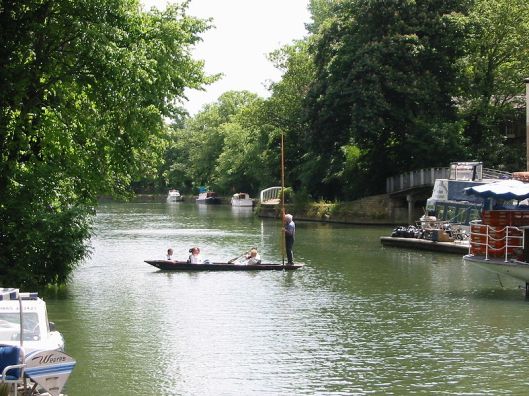 The Thames at Oxford (courtesy Zxb via Wikimedia Commons)

Sure enough, within hours, the girl stirs. She can’t speak — whether from psychological trauma remains unclear, for she bears no apparent physical injury — and at first, she doesn’t bother to track any conversation or stimulus around her. But alive, she is. The question is, whose daughter is she? Is she Amelia Vaughn, abducted from her parents two years before? Or Alice Armstrong, born to parents who no longer live together, and who has herself disappeared, poor mite?

The solution to this mystery involves violence, loss, conspiracy, romance, and some of the most beautiful prose you’ll ever read, elegantly simple, unhurried, like the river. This is storytelling at its finest, as befits the tradition of the Swan. Once Upon a River conveys that benevolent, all-knowing authorial mood of folklore or fable, and if it didn’t, I’m not sure the novel would work, or at least not for me. The bad guys are truly bad, and the good guys, though they may have a foible or two, could never do anything really hurtful. They never get angry, jealous, or aggressive, nor do they have any grudges, never mind holding onto them.

Robert Armstrong, grandfather to Alice, is the son of a lord and a black serving girl, well educated, thoughtful, and sensitive. You have to like Robert, and though he’s keenly aware that his dark skin scares many people, he has infinite charm that wins just about anyone over within a minute or less. Does he resent the prejudice that makes him a feared, hated object on sight? No, he doesn’t. Should he? If we’re talking about the real world, why, of course. But Once Upon a River mixes fantasy with reality, and though a Woo-Woo Meter, if such a thing existed, would flicker occasionally, I’m glad that Rita’s there to scoff at magic. She’s ably aided in her skepticism by Henry Daunt, the badly injured man, who turns out to be a photographer, and therefore skilled at observation.

Yet Setterfield can seduce even a crotchety skeptic like me. I particularly like her creation of Quietly, a spirit boatman credited with rescuing many of his living brethren from certain drowning when it’s not their time, while, conversely, escorting to the next world those whose moment has come.

But mostly, I think the writing carries the novel. Take, for only one example among many, a passage about a man as he leaves the Swan the fateful night, trying to make sense of having witnessed a girl seemingly return from the dead:

Usually the walk home from the Swan was a time for regret — regret that his joints ached so badly, that he had drunk too much, that the best of life had passed him by and he had only aches and pains ahead of him now, a gradual decline till at the end he would sink into the grave. But having witnessed one miracle he now saw miracles everywhere: the dark night sky his old eyes had ignored thousands of times before tonight unfolded itself above his head with the vastness of eternal mystery. He stopped to stare up and marvel. The river was splashing and chiming like silver on glass; the sound spilled into his ear, resonated in chambers of his mind he’d never known existed. He lowered his head to look at the water. For the first time in a lifetime by the river he noticed — really noticed — that under a moonless sky the river makes its own mercurial light. Light that is also darkness, darkness that is also light.

Note how Setterfield’s description remains understated. No raptures or verbal fireworks here; only the river and sky as someone who’d watched them all his long life would view them. And because he sees them afresh, you catch his sense of wonder, joy in being alive, and gratitude that he’s lived this long to appreciate the heavens and the water. Lightly done, and all the more affecting for that.

That’s Once Upon a River. Read, and be seduced.

1 thought on “Mythic Seduction: Once Upon a River”