Sixteen-year-old Leo Sercombe, a native of North Devon and a skilled horseman with a deep love of the natural world, sails with the Royal Navy from Scapa Flow in late May 1916 to do battle against the Germans. That alone would be a peculiar irony, but, even worse, Leo’s encased in a steel-plated gun turret on the heavy cruiser Queen Mary, without fresh air or a window to the exterior. I probably don’t need to tell you that the Queen Mary will fare poorly in the imminent Battle of Jutland. But I should note that Pears suggests how British complacency and pride in an outdated warship brings disaster, and that the sailors pay the price. 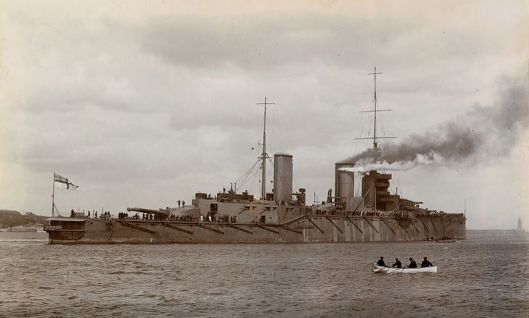 HMS Queen Mary leaving the River Tyne, 1913. Almost 1,300 men went down with her when she sank at the Battle of Jutland (courtesy Tyne & Wear Archives and Museum, via Wikimedia Commons)

Meanwhile, Charlotte (Lottie) Prideaux, an earl’s daughter roughly Leo’s age and a childhood companion (their illicit friendship having caused great trouble in an earlier volume), studies veterinary medicine on the sly. Lottie watches, pained, as her father’s estate transforms under the pressures of war and modernity. But she’s determined to follow this career denied young women, especially the well-born, and in her zeal, she trusts the wrong party, enduring violence and betrayal. There are no protections in this world.

The Redeemed is the final installment of Pears’s West Country Trilogy and makes a fitting sequel to The Wanderers, a mesmerizing novel of grace and beauty. As with the previous work, in The Redeemed, the prose remains luminous and fixed on the physical world, especially through Leo’s part of the narrative. Many writers try to do this, but Pears has the particular knack of rendering Leo through the natural and metaphysical at once, whether he’s in his gun turret or at anchor at Scapa Flow:

The Flow was a bleak immensity of water, surrounded by low, barren hills. The spanking wind gave an edge to a long summer’s day, and turned into gales in winter. They blew in carrying salt from the sea, and men on deck had to yell to each other to be heard. Though snow was rare, when it did fall the wind blew it into drifts against the gun turrets. The winter days were short and mostly wet. But Leo did not mind the changing weather. With few companions on the ship, he looked outward and felt less imprisoned by their confinement than most. There were frequent, vivid rainbows, and clear nights when the aurora borealis flooded the sky. The first time Leo saw it he thought that the powers of the heavens had been made manifest. That he would see the Son of Man, coming on the clouds of heaven with power and great glory.

Lottie’s world involves going on rounds as a veterinarian’s assistant, pretending to be male; learning how to help a mare get through a breech birth; getting angry when a farmer mistreats his animals, all rendered in painstaking detail. But she’s also the daughter of the manor, with a stepmother not much older than herself, and the precarious emotional territory that entails. Through her and the constraints she faces, the reader sees England of the past fade forever, a touching elegy to what once was.

I like both narratives very much, though I think Leo’s succeeds more fully, portraying his social skittishness and fierce desire for independence, much like the horses he loves, and his fear to ask for friendship, which he subsumes in a remarkably disciplined dedication for work. You also see how the machine has come to dominate — the gun turret, the tractor that replaces farm horses, the people he once knew who’ve changed their rural ways of life to accommodate the trend — and what gets lost in the exchange.

Throughout, whether from the narrative, the title, or the jacket cover, you sense that Lottie and Leo are meant to find one another again, but you know the path won’t be easy. Pears strings out the tension to the utmost. Along the way, both characters blunder, especially Leo, who trusts very little and has trouble claiming his own.

Compared to The Wanderers, The Redeemed doesn’t hang together as tightly, and though the story unfolds with riveting detail, it’s not always clear why and how the pieces belong or fit together. Though Pears doesn’t waste words, his discursive style may not be for everyone, though I find it enthralling.

I did bump up against one contrivance. The story implies that Leo enlists in the navy at sixteen to avoid the trenches; but if so, why didn’t he wait a couple years to see whether the war would end first? Had he done so, however, I suspect that those two years would have posed a serious problem for the novelist. What would Leo do in all that time, and might he seek out Lottie too soon? Not only that, Jutland was the only major naval battle of the war, and you can see why Pears wants to include it, for he does a magnificent job of rendering it and linking it to Leo’s character.

But that’s a minor point and in no way detracts from The Redeemed. I think I enjoyed the book more for having read its predecessor, but it’s not essential.

1 thought on “Lost, and Found: The Redeemed”