Louise Benchley would be too polite and constrained to say so, but she believes her forthcoming marriage to William Tyler, the social event of the season, will be a disaster. Not in the sense of the Titanic, which has just sunk — this is 1912, the New York of the Four Hundred — but the confidence of everyone around her that the match is unsinkable has her especially worried.

And why not? Louise knows nothing about marriage, certainly nothing about sex, for her mother has made sure not to tell her. Consequently, the young fiancée turns to her maid, Jane Prescott, who’s rubbed elbows with life in very close quarters. Yet there’s a limit to what the anxious, self-effacing bride-to-be can absorb, and Jane hesitates to enlighten when her employer won’t.

But that problem soon fades in light of another: A nanny hired by the groom’s uncle has been found dead, her throat cut. Since said uncle has earned notoriety for arresting members of the Black Hand, an underworld group of Italian origin — and since the murder victim was Italian — the family immediately assumes it’s a gang revenge killing, and so does the press.

However, Jane’s not convinced, and as a lady’s maid, she has access to information, domestic conflicts, and secrets that the family wishes to cover up, and which the newspapers can’t penetrate. Jane also has several motivations to pursue the case. She’s determined to do justice by the victim, whom she liked, and whose only crime, she thinks, was loving the children she cared for. The prejudice against immigrants in general, Italians in particular, offends Jane to the core, as does most of the gentry’s refusal to grant the crime any importance, especially compared with the anticipated nuptials.

Conversely, she’s convinced that Louise’s desire to call off the wedding, perhaps using the tragedy as an excuse, would deny the young woman her first and best chance at happiness. Note the character-driven aspects to our sleuth’s quest, which informs the novel throughout, not just when it’s convenient, and perhaps run deeper than those of your average mystery.

Moreover, Fredericks handles these motivations with subtlety. Jane cares passionately, but the author knows better than to let her protagonist lecture or indulge in earnestness; rather, she’s quietly persuasive, mostly for the reader’s eyes alone. Jane’s outlook has been forged by life and takes a practical, rather than a crusader’s, view, so she has no need to trumpet anything—which fits her discretion as lady’s maid. That’s one reason Death of a New American stands out, but there are others. 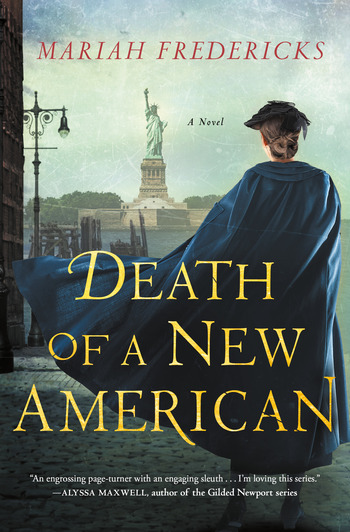 With gentle humor, Fredericks pokes fun at the mores and beliefs of the upper crust, whether their fears that the new tunnel from Manhattan to Queens under the East River will collapse — what a horror, since they can’t swim. I love the scene where William’s younger sister, a sophomore at Vassar, enjoys shocking her elders with the outlandish ideas of the sociologist Emile Durkheim, and how the conversation evolves into discussion of “unpleasant emotions.” A true lady, say the matriarchs, simply refuses to feel anything like envy or resentment. Jane, who knows better, also knows to keep her mouth firmly shut.

Everywhere, Fredericks folds the time and place deftly into the characters’ lives and the story, so that the era feels inhabited. She clearly loves and knows her native city, whether to describe the evolution of Herald Square, its rival (and successor) Times Square, or the streets of Little Italy:

Finding any one man on Mulberry Street was not going to be easy. Doing anything on Mulberry Street was not easy, as it was not so much a street as a throng of humanity, horses, and wagons. To make your way through, you were often obliged to step from pavement to cobblestone and back again when the path was blocked by café dwellers, vegetable stalls, barrels of wine, or a fistfight. Some might have called it Little Italy, but they would have been wrong. Mulberry Street was Neapolitans. Sicilians resided on Elizabeth Street, Calabrians and Puglians on Mott.

With admirable touch and generosity, Fredericks lets you think along with her sleuth, hiding nothing, resorting to no tricks or sudden revelations. Death of a New American is an utterly satisfying mystery.

Disclaimer: I obtained my reading copy of this book from the publisher through my work for Historical Novels Review.