Around the turn of the twentieth century, two famous brothers, Henry and William James, converse in Henry’s seaside home in Rye, East Sussex. William, philosopher, psychologist, and lecturer (in public life and private), says, “Harry, I find I have to read innumerable sentences you now write twice over to see what they could possibly mean. In this crowded and hurried reading age you will remain unread and neglected as long as you continue to indulge in this style and these subjects.”

Even — especially — as an admirer of Henry James, I have to laugh. I used to share William’s criticism of his brother’s prose, as probably many readers do today. But in this biographical novel of an author perhaps more closely attuned to social nuance and unspoken truth than any other of English expression, James’s world opens up with impressive clarity, poignancy, and depth. You see how the master thinks, observes, derives his fictions, absorbs tragedy and setbacks and — always tentatively — ventures beyond himself, almost invariably to retreat. 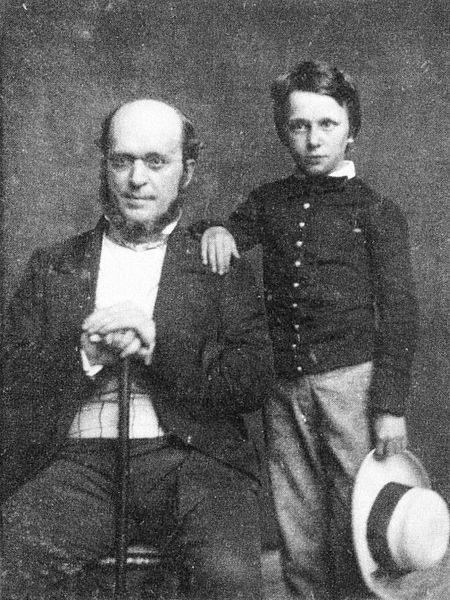 The great writer as a boy alongside his father, Henry, Sr., whose influence loomed large. From an 1854 daguerrotype by Mathew Brady (courtesy Wikimedia Commons; public domain in the United States)

Consequently, The Master delivers the story of how a writer’s mind works, the stuff that anyone who writes will recognize — the bits of life that beg to be set down, impatience for tiresome guests to depart so that you can get to work, the pains of failure, the glories when a reader picks up your work for the first time and tells you how much she likes it. (Notice how long my sentences are getting; be it known that Toíbín’s aren’t, for he hasn’t tried to write James, only about him.) But there’s much more, for Toíbín focuses on how a man who observes so keenly often remains an observer, and why. James’s fear of emotional entrapment conveys a figure who feels constantly under siege, though he might not say so. He worries that the world he knows is fast disappearing.

There’s little plot in The Master, yet there’s much activity, all laden with meaning. As the novel begins in 1895, Henry tries to circumvent his anxieties about the first performance of his play in London by attending a nearby theater showing Oscar Wilde’s comic drama, An Ideal Husband. James, who could be a prig, finds Wilde’s work completely vulgar and resents his success, more so after his own play fails miserably. But months later, when Wilde sues his lover’s father for slander over accusations of homosexuality, James takes a renewed interest in Wilde. It’s not schadenfreude but the first intimation that James has homosexual attractions and desires he’s never acted on.

Throughout, Toíbín handles that theme with the delicacy befitting his protagonist. How sad that this man, whose instincts are kindly and sensitive, who has many friends who clamor for his company, who understands children and easily befriends them, suppresses the longing that might have made him happier. Granted, no one’s more keenly aware of societal disapproval and pressure than Henry James, yet you sense that tact and discretion might have permitted more leeway than he allows himself.

But Toíbín also reveals Henry’s less attractive facets, such as his selfish refusal to help a couple dear friends in dire need. Or, earlier in his life, how his parents somehow decide the Civil War has nothing to do with him—startling, considering that the Jameses are staunch New England abolitionists, as are their friends. Two of Henry’s brothers enlist and serve as officers in a famous Black regiment; one is grievously wounded.

Those failures point to how his parents have arranged Henry’s life for him (and William’s, to some extent), though it’s Henry who never escapes that confinement. As he muses over the body of his only, beloved sister, who’s just died, he realizes what a circumscribed life they have both led:

Her face changed as the light changed. She seemed young and old, exhausted and quite utterly beautiful. . . . He and his sister would die childless; what they owned was theirs only while they lived. There would be no direct heirs. They had both recoiled from engagements, deep companionship, the warmth of love. They had never wanted it. He felt they had both been banished, sent into exile, left alone, while their siblings had married and their parents had followed one another into death. Sadly and tenderly, he touched her cold, composed hands.

The Master may not be for everybody. But you don’t have to be a fan of Henry James to appreciate its breadth and poignancy.