Vera Sedge’s life is a painfully funny mess. It’s 1940, and London’s getting pounded by the Blitz, but to her, that’s not the worst; the war seems just “out there” someplace. Rather, Vee, as she’s called, runs herself ragged caring for her lazy, selfish nineteen-year-old son, excused from military service because of a heart murmur and running around somewhere, doing things he refuses to talk about. Her dotty mother, also living with them in a northwest suburb, expects to be waited on too, while she writes long, chatty letters to Mr. Chamberlain (and then Mr. Churchill) to complain, in a pen-pally way, about shortages and shoddy goods and refugees who must certainly be spies. 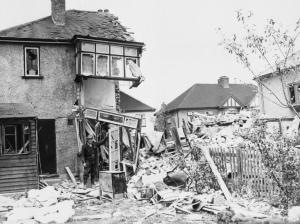 Vee would dearly love to latch onto a paying scam; it’s the only way she knows how to earn her meager living. But as a con artist, she’s inept, partly because she rushes headlong into whatever looks good right that second, only to find that the string of lies she’s told don’t hold water, and she’s trapped. She tries passing herself off as a door-to-door fund raiser for the wartime charity du jour but earns more suspicion than income.

Meanwhile, Noel Bostock, a brainy ten-year-old with no friends or social skills (“hobbies are for people who don’t read books”), lives with his demented godmother, Mattie. His tender love for her is all he has in the world, and when she wanders out one night and dies of exposure, Noel’s bereft and alone. The law says that, like all other children living near bombing targets, he should have been evacuated. But, as resistance is his godmother’s legacy–in her heyday, she fought for woman suffrage, chaining herself to fences and serving a prison term–legal authority means nothing to him.

Vee takes Noel in, thinking to pocket the government allowance for harboring an evacuee child, and her first impression is that he’s simple and pliable. Wrong. What she’s found is a partner in crime–a senior partner, the brains behind the operation. Noel, ever organized, quickly figures out which charity they should target, in which neighborhoods, using whatever script he’s concocted for her. Immediately, their efforts bear fruit.

I have to admit, I felt uncomfortable reading about this dynamic duo bilking credulous, good-hearted folk for money that would never reach the widows, orphans, or wounded soldiers it was meant for. Granted, judged against the venal behavior they see around them, they’re small fry. In Evans’s world, nobody has time to be a hero, because being on the take requires every spare minute. If this is England’s finest hour, as Churchill proclaimed, you have to wonder what the brave, doomed pilots in the RAF were fighting for. (Vee, of course, evokes the Churchillian two-finger salute for victory.) Crooked Hearts is a sendup on a small, yet potent scale, a wartime theater of the absurd.

But when there’s no time for heroism, that leaves love, which takes no extra effort or splendid opportunities. You get the sense that Vee and Noel will somehow soften each other’s carefully sheltered heart, and it’s worth finding out how. There’s a dollop of comeuppance for those who really need it, which is satisfying too.

I loved the humor in Crooked Hearts–the letters to the prime minister, the ridiculous scrapes Vee gets into, the ten-year-old who talks over his guardian’s head, the satire on British attitudes. Most of the characters are merely that, a collection of attitudes. But the novel works because Vee and Noel are fragile humans whose desires have been thwarted so long–as in forever–they can’t even name them. Theirs is a fine tale.
Disclaimer: I obtained my reading copy of this book from the public library.

Now, in the living of my life, I’ve killed deadly men and dangerous animals and made love to four Chinese women, all of them on the same night and in the same wagon bed, and one of them with a wooden leg, which made things a mite difficult from time to time. I even ate some of a dead fellow once when I was crossing the plains, though I want to rush right in here and make it clear I didn’t know him all that well. . . . it all come about by a misunderstanding.

So begins Paradise Sky, as darkly funny, searing, and engaging a tall tale as you could want. The narrator is Willie, growing up in Reconstruction-era Texas, a dangerous, terrifying place for a young black man. Willie’s troubles begin when his eyes linger on a white woman’s rear end while she’s hanging up the wash: Her husband, a homicidal fool named Ruggert, proclaims that Willie raped her and should swing for it. Willie wants to laugh it off, and if he were white, he could have, particularly given the woman involved. But the situation is deadly serious, and if there’s a lesson in this novel, it’s that the Ruggerts of the world are unreachable (a painful fact underlined by the recent murders in Charleston). Innocent people die because of Ruggert’s mania, including Willie’s father, and the young man must flee.

However, the charm of this novel is that no matter how bleak, or even tragic, the circumstance, humor’s never far behind, sometimes neck-and-neck. I can’t remember the last time a novel made me laugh so hard. Earthy metaphors flavor the narrative, as with one description of Ruggert, “who latched on to notions like a thirsty tick and wasn’t happy until he had sucked all the blood out of them.” Another character smelled of onions, liquor, and “mating skunk,” while a third was such a gifted tracker, he could “follow a ghost in moccasins.” But the funniest part is the dead-pan absurdity. I knew I wanted to be a writer when, as a teenager, I read James Thurber. Lansdale’s got a different sensibility, yet his characters share one Thurberesque quality: They swim in their sense of the ridiculous, as though it were perfectly natural.

But back to our story. Willie finds a haven in an unlikely place, a farm belonging to a former preacher who served in the Confederate Army alongside Ruggert. But Nate Loving, the farmer, is himself unusual, having decided that a belief in racial superiority makes no more sense than the Scripture commonly cited to justify it, and so has no further use for either. Nate teaches Willie everything he knows about riding, shooting, gardening, and the constellations, which is, as Nate might say himself, a pretty fair piece of knowledge. However, Ruggert eventually catches on where Willie has gone, and so the fugitive flees once more, taking the name Nat Love as tribute to the white man who was like a father to him. 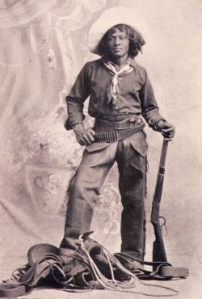 The real Nate Love, the inspiration for the novel (Courtesy blackpast.org).

Nat learns many trades during his adventures, none of which he might have figured on as a career–soldier, bouncer, spittoon-emptier, and rat-killer, to name some. He befriends Wild Bill Hickok, enters a shooting contest, and falls in love–and all three activities are related. But Nat’s fame and accomplishments can’t protect him from the race prejudice that’s all around, or Ruggert’s tireless efforts to track him down.

If you read Paradise Sky–and of course, I recommend that you do–don’t read the jacket flap, which is practically a complete synopsis. And ignore the discussions about religion, which, though they fit the time and story, can be tendentious, especially if you’re not Christian. Luckily, they’re brief.

Disclaimer: I obtained my copy of this novel from the public library.