Review: The Jazz Palace, by Mary Morris
Doubleday, 2015. 245 pp. $26
It’s 1915, and Chicago’s South Side has its clubs where black musicians assume that the very few white patrons must be there to steal their secrets. But that’s not why young Benny Lehrman hangs around, using the money intended for his piano teacher to bribe his way past the door. Jazz, whose name Benny doesn’t even know at first, reaches him because it says everything the tongue-tied, soulful teenager can’t put into words.

Jazz speaks of loneliness bred in the bone, of having to drag yourself to a job you hate, of desire for the kindness, attention, and sympathy he can never have and believes he doesn’t deserve. Underlying his pain is a family tragedy: Several years before, his younger brother, the family favorite, died in a blizzard. Ever since, Benny has unfairly taken the blame.

However, the novel opens on a different catastrophe. Three of Pearl Chimbrova’s brothers die when the S.S. Eastland rolls over and sinks just after leaving the dock. Benny, who happens to be watching from the same footbridge as Pearl, dives into the water and tries to help, but the bodies he pulls out are already dead. Even without reading the jacket flap, you know Pearl and Benny will meet again. 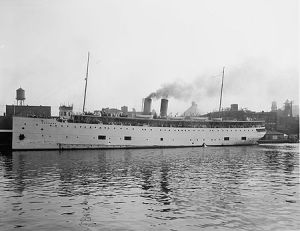 Pearl’s mother never recovers, leaving her eldest daughter to pick up the pieces. As the years pass, Pearl takes over more and more responsibility for running the family saloon and mothering her younger sisters. Like Benny, she believes that she doesn’t deserve care or attention. Only routine keeps her going.

For Benny, it’s music, as he pursues learning jazz with a single-mindedness and energy he has never shown toward anything else. When he hears Napoleon Hill on trumpet, he knows why:

Everything he’d ever known about the world–that gravity holds you down and mothers are there when you get home, that baseball has nine innings, and sleep awaits you at the end of the day–was turned upside down. He forgot about his brother lost in the snow and the dead girl he’d danced with when the Eastland went down. . . . He even forgot he was a person in a crowd, not a very old person at that, just a boy. His arms and legs all melted into one. He wasn’t anywhere but inside the music he was hearing.

Napoleon and Benny, African-American and Jew, become close friends and musical partners, drawn together in part by vulnerability. With the advent of Prohibition, Pearl’s saloon has turned into a speakeasy, and Napoleon plays there from time to time, a great risk for a black man to take in a white neighborhood. Naturally, Benny sits in one night, but if you think you know the rest, you’ll have to read this book to see why Morris is too good a novelist to take the low road.

The Chimbrovas, the Lehrmans, Napoleon, every character in this book, even Al Capone, has been emotionally (if not physically) scarred. In this world of pain, in which warm currents drift through–sometimes within reach, sometimes not–there are no answers, only doing what you have to. But there are dreams, for those who dare, whether it’s just to be able to keep going, or to reach for something that might, one day, feel like happiness.

As I’ve said recently, I generally dislike novels about crossed paths, but The Jazz Palace nails it. I could explain that by saying that Morris opens up her characters’ inner lives, gets beneath their skins, and writes lyrically in the bargain. But it’s also that these people, like their creator, know they can’t afford cheap sentiment, and that whatever they want must be earned.