If you’ve read any of Furst’s fourteen books, the time and place will be familiar: Paris, 1941, the City of Light under a blackout imposed by the German Occupation. It’s early spring, so America has yet to declare war, and Britain fights alone against German power at its high-water mark. Trying to strike back at the German hinterland, British bombers overfly French territory, and many don’t make it home. Consequently, increasing numbers of British airmen are parachuting into Occupied territory, and the nascent Resistance does its best to keep them out of German hands and send them to safety in neutral Spain. 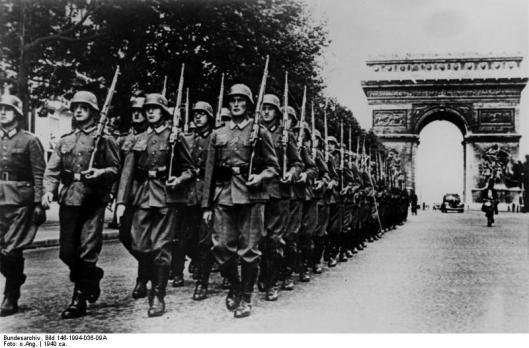 One such Resistance cell operates in Paris, under a man code-named Mathieu. Like the setting, he too is typical Furst–worldly, mature, resourceful, committed, without swagger, doing what he does because he thinks someone has to, refusing to judge those of his countrymen who want no part of it. Oh, and did I say that beautiful women find him irresistible? Many things are rationed in Furst’s Europe, but sex isn’t.

Naturally, the occupiers and their French toadies do their best to crack the Resistance. But luckily for Mathieu and his operatives, the Occupation is new enough so that the German Army and the French police undertake the counterespionage; the Gestapo remains largely in the wings. As a result, the bad guys aren’t as vicious and uncompromising as they might be, especially since many of the French contingent would rather not arrest their countrymen. The real danger lies in ordinary civilians looking to make money by informing, and they can be persistent.

Mathieu . . . saw what was indeed a strange-looking man, or, rather, a strange-looking boy, barely in his twenties. Standing at the bar and drinking a glass of wine, he had dark skin and dark eyes, wore a buttoned-up overcoat that was both much too tight and much too long, a hat with a wide, flat brim and a low crown, also flat, to which he’d added a bow tie that might once have belonged to a café waiter. With a pencil line of a mustache that traced his upper lip, he struck Mathieu as a boy dressed up to play his father.

But this guy, though dangerous, isn’t the real threat. The real threat is a German police inspector imported from Hamburg to crack the Resistance cells operating out of Paris, and he’s got people working for him who are much smarter than anyone Mathieu has come up against.

Furst moves his story rapidly, and, as always, his narrative represents the definition of “no; and furthermore.” Plans backfire thanks to inattention or nerves or plain bad luck. What I like about A Hero of France is that whatever heroism you see is of the quiet variety and seemingly more genuine for it. The narrative also gives the bad guys their due; of the several minor characters who come through clearly, the German police inspector and his chief mole stand out for me.

Furst’s trademark atmospheric descriptions are in full force too. You feel the blackout, the tension in the streets, a divided nation about to discover that when it comes to privation, they ain’t seen nothin’ yet. Furst suggests the political struggle between the Resistance and its British contacts–we won’t call them allies–and the pressures under which the French administration tries to remain intact. With equal, admirable economy, he makes a key historical point, that the British were so desperate for air crews that they sent escaped fliers back into the air. (This contrasted with subsequent American policy, which grounded escapees on the logic that they might be recognized if recaptured, compromising them and anyone who had helped them.)

All this is fine. But I still pine for Furst’s earliest works, which felt fresher, more fleshed out, and more gripping. They were also much longer. Maybe that kind of book is passé or unprofitable or un-something. But A Hero of France has tons of narrators, few of whom come alive, and, despite the “no; and furthermore,” inconvenient circumstances sometimes resolve themselves in ways they wouldn’t have in earlier books. If Furst is trying to suggest that he can do this because it’s only spring 1941, and the very, very bad guys aren’t in charge yet, I’m not buying.

Paris is Paris, and we can always have that, as Humphrey Bogart told Ingrid Bergman in Casablanca. But certain things can be too familiar and leave us wanting more.

Reading Alan Furst’s pre-World War II spy fiction is like eating pastry from the hand of a master chef: You savor it, enjoying the many flavored layers, and sigh when you’re done. Midnight in Europe, his fourteenth effort, is no exception, though whether the flavors meld well or leave as strong or lingering an aftertaste as previous novels is another matter.

Cristián Ferrar is a typical Furst protagonist–brilliant, handsome, escaped from his native country (Spain, in this case), well connected, attracts interesting women, appreciates the good things in life (so must spend a lot of time in Paris), and holds strong principles without having to shout them from the rooftops. A decent man, in other words; but December 1937 will test any European’s sense of decency, not least in Spain, where Franco’s Fascist troops are winning a civil war in which mercy and justice have no meaning.

The Republican forces resisting Franco lack both unity and weapons. Ferrar can do nothing about the political mess strangling his country, but, as a lawyer with a respected firm of international scope, he may know people who might just possibly be willing and able to run guns to the Republicans. However, this is worse than risky business. Hitler and Mussolini are actively supporting Franco, which means the Gestapo will be watching; and even Stalin, who grudgingly supplies the Republicans, won’t let anyone else do so, which means the NKVD will unleash its hit men on nominal allies. Will the democracies help? Don’t even ask. As one character observes, “Europe is a nice neighborhood with a mad dog. Just now the dog is biting Spain, and nobody else in the neighborhood wants to get bitten, so they look away.”

Rueful political irony, a Furst specialty, is a particular pleasure of Midnight in Europe. A Macedonian underworld figure “spent his teenage years fighting Bulgarian bandits. After that, being a gangster was easy.” A scrappy Polish dockworker in Gdansk, upset that German agents are muscling into the waterfront, complains that he hasn’t punched a German “in days.”

Another Furst trademark is atmosphere you can practically eat with a spoon:

Parisians found themselves restless and vaguely melancholy for no evident reason, an annual malady accompanying the nameless season that fell between winter and spring. The streets were quiet–only dog walkers beneath shiny umbrellas and the occasional couple with nowhere to be alone. In the cafés, newspapers on their wooden dowels went unread, as though the patrons refused to read them until they produced better news. A change of government was in the air, though nobody believed it would change anything but itself.

Even so, Midnight in Europe, the thirteenth Furst novel I’ve read, seems too gentle to be a thriller. The only scenes that truly gripped me were those toward the beginning, in Spain, and a couple toward the end. I wish the author had set more of the story in Spain, territory that, if I remember correctly, he hasn’t revisited since a large, breathtaking swath of his first novel, Night Soldiers. Romance moves Ferrar almost as much as politics, and that’s fine, but he just isn’t tested enough, either on the street or in his heart. You sense he can get out of any trouble he gets into, and that nobody he trusts will ever turn on him.

Some years back, a literary agent told me that to sell well, American authors must write thrillers that have American or British protagonists. American readers, he said, won’t buy them otherwise–at least not in large numbers–whereas Europeans don’t trust Americans to get European characters right. Furst has been bucking this trend for years, though Mission to Paris had a European-American protagonist, and Midnight in Europe has scenes in New York.

So I wonder whether market forces (or perceptions of them) have influenced his latest output. His books have generally gotten shorter, softer, and less complex. (Oddly, that relative simplicity doesn’t stop the text of Midnight in Europe from identifying characters when they reappear, as if the reader might have forgotten who they are. This is so out of character for Furst that I suspect an intrusive editorial hand.) In fairness, basing fiction on the dread before the storm is no easy task. Even more ambitious, the latest novels feature spies who aren’t professionals but have volunteered or been coerced into it. Furst clearly admires that scheme and an author who made good use of it, Eric Ambler. (Check out Journey into Fear sometime, and you’ll see what I mean.) But it doesn’t always click.

By all means, if you’re a Furst fan, read Midnight in Europe. But if you’re just starting out with him, try Mission to Paris, which I find the best of the last half-dozen titles. And if you’re in for a longer, wilder ride, try Night Soldiers (and its long, fascinating section on the training of an NKVD agent) or Dark Star.