In 1845, Constantia MacAdam, just delivered of twins (one of whom died), serves as wet nurse to the large, ever-growing Chambers family, temporarily residing outside Edinburgh while their city home undergoes renovation. Constantia, unable to be with her beloved husband, makes the best of her grief over her lost son and her struggle to make ends meet, but she has lucked out. Not only has she landed among the kindest people in Scotland, who treat her like a family member rather than a servant, she’s never found such intellectual stimulation in her life, and she thrives on it.

Mr. Chambers, a newspaper publisher, takes a keen interest in the natural world and urges his immense brood to do likewise, even (if not especially) the girls. He impresses Constantia, who also loves natural science, because of the breadth of his knowledge and the liberality of his mind. A sensational book has appeared, Vestiges of the Natural History of Creation, and its unorthodox views receive a warm welcome in the Chambers household. The reader will guess that Vestiges anticipates Darwin’s influential book almost fifteen years later. 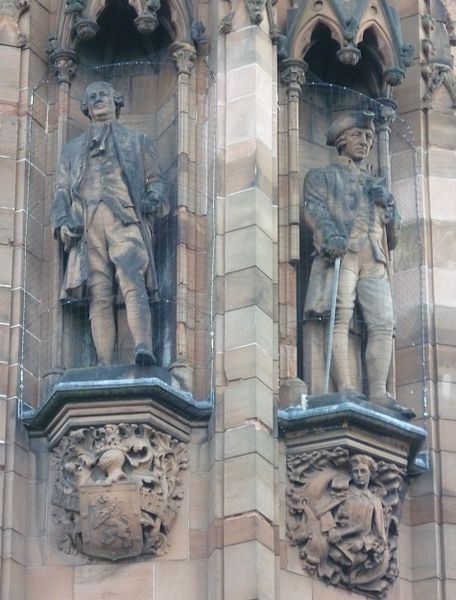 Figures such as David Hume and Adam Smith, depicted here at the Scottish National Portrait Gallery, were part of the Edinburgh Enlightenment, often presumed to be an eighteenth-century phenomenon. But their nineteenth-century counterparts included such scientific and cultural luminaries as Thomas Carlyle, Mary Somerville, Charles Lyell, and James Clerk Maxwell (courtesy Kim Traynor, via Wikimedia Commons)

While this is happening, the Chambers’ gardener, who has been at this residence all his life, has derived similar revolutionary ideas from observing the randomness of life and death, thriving and deformity, among his beloved plants. And on a Scottish island reasonably near in mileage yet isolated and hard to reach by even the fastest transport, a quarryman seeks to split apart a limestone ledge, in which, he believes, important fossils lie.

To say, therefore, that The Great Unknown is a philosophical novel about the origins of life restates the obvious. The story, at first glance, may seem thin. Constantia longs to rejoin her husband. She also strives to learn who her father was, which the Chambers family, being the soul of tact, infer is a troublesome matter, a secret best left unprobed. Her good character is plain; what more need anyone know?

That doesn’t satisfy Lady Janet, a distant relative of theirs who possesses neither tact nor sensitivity, though she does express much righteous superiority. (When Constantia finally gets the courage to talk back to Lady Janet, it’s delicious.) Lady Janet is the foil for the good-hearted spirit of inquiry that reigns chez Chambers, and a reminder of how different they are from most Britons.

But there’s much more besides the evocation of a country on the brink of a moral upending through scientific discovery, or the excellent, personal portrayal of the conflict between religion and science. We have a thought-provoking daily drama playing out chance and consequences, fortunate or tragic, and people trying to figure out whether these outcomes mean anything or merely display the benign indifference of the universe. (Note the name Constantia in this regard.) Add to that what makes a person human, and how we differ (or don’t) from other species; or is it just our vanity that we do?

In sentences that have a Victorian ring, Kingman has crafted a plot that often turns on Dickensian coincidences, perhaps too fortuitously, at times. But she’s also created a family as a perfect test case for her themes, and not just because of their scientific curiosity. The male species of Chambers are born with a sixth finger on each hand and a sixth toe on each foot. Random chance, indeed, as with the success of surgeries necessary for these digits’ removal. As for Mr. Chambers, imagine a Mr. Bennet of Pride and Prejudice as a witty, urbane man of science who’s more immediately concerned with his daughters’ grasp of Linnaean nomenclature than how to attract a husband—though, rest assured, they have dancing and music lessons too.

Further, when anyone in the household has a musical idea that grabs them at any time, they are encouraged to try it out immediately:

It was understood by all that musical ideas were so fragile, so evanescent, and so precious that they were to be snatched from the thin air upon the very moment of their wafting into existence; they might otherwise as evaporate as quickly as they had precipitated, never again to be recovered. No chances could be taken with them; it was a duty to bring them into the world. Constantia became accustomed to seeing an inward distracted stillness fall over the faces of the girls; any of them might, even in the midst of nursery-supper noise, fall silent for a moment; then spring from her chair, to run to the pianoforte—the harp—the violin.

Not everyone will gravitate toward a quiet, reflective story like this, a daguerreotype of the moment when brave thinkers began to ask the most earthshaking questions without fear of divine retribution. But readers who take The Great Unknown for what it is will be greatly rewarded.

This engrossing novel imagines Napoleon’s final years, when the Royal Navy escorts him to St. Helena, an island in the South Atlantic, where he is to live out his days. Since the British assume that their famous prisoner has other hopes, if not explicit plans, for escape, they’ve chosen St. Helena for its lack of beaches and position athwart key trade routes, including that from India.

From the moment Napoleon arrives in Jamestown, the only town on St. Helena, he casts a spell:

The dread that seized the port in that instant was not only for the man’s devilish reputation, not only for the fact that he was the Great Ogre, but once more that his tread would rock the earth, and that the escarpments above Jamestown would shatter, and boulders the size of God’s hand would descend on the town’s humble roofs. Many indeed must have felt like that, since when the cutter was not so far off, the crowd, which had been vocal all day, grew near to silence, and what had been shouts became whispers. . . .

Like many Englishmen in St. Helena, William Balcombe is fascinated beyond mere curiosity. Known to intimates as Billy, he works for a trading firm doing business with the East India Company. He’s been granted a sizable residence, with orchard and lands surrounding, and a separate house that, with minor alterations, provides a suitable home for Napoleon and his small retinue. Indeed, Billy, a man who likes giving dinner parties where wine flows freely, is delighted to have such close acquaintance to the prisoner, whose charm quickly wins over all the Balcombes–save one.

That one is daughter Betsy, about to enter her teenage years. Known as “impudent” or “wild,” Betsy–to the special horror of the emperor’s retinue–uses her growing skill at the French language to ask him how, for example, he could abandon one army in Egypt and another in Russia. These are excellent questions, and you’d think that the people who’d dubbed him ogre would applaud her acumen. But no; she’s punished instead for her willfulness, though the ogre himself insists that he likes her frankness, even if it takes him up short.

Naturally, Betsy’s less interested in great campaigns than the battle for her own dignity, and she’s trying to figure out whether, say, the games of blind-man’s-bluff she plays with Napoleon are fit for a person such as herself on the verge of womanhood. But that only adds layers to this most unusual story. I can’t think of any other coming-of-age novels in which the mentor character is such a famous, controversial figure, and Keneally uses this relationship to masterful effect. At times the narrative, with its intense focus on manners and social signals, reminds me of Austen, but with a twist: You can feel the dust of lost empires and passionate enmities that would flame at the slightest provocation.

Betsy seeks Napoleon out not just because he’s famous or charming. If Betsy looks to a Bonaparte for her education, it’s because the Balcombes provide none. She has an older sister, Jane, who’s so straight and narrow, forever hoping to set a good example, that even Betsy, who loves her, tires of her; one reason Betsy must test everything and everyone around her is that Jane won’t. (Is it coincidence that Daughters of Mars, Keneally’s fine novel about Australian nurses in the First World War, also featured two sisters, one impulsive, one restrained?) But the Balcombes, chalking Betsy’s behavior up to an ungovernable character, miss the point completely. Napoleon’s got spine, a quality the girl’s father sorely lacks–to his family’s great detriment–and it never occurs to Billy that his younger daughter would even want or need to know what this substance is all about. And in her quest to understand feelings that lie just beyond her ken, she learns about truth-telling, secrets, and power.

The latter lesson comes painfully to the fore when a new governor comes to St. Helena, Sir Hudson Lowe. What a nasty piece of work he is–petty, sadistic, self-righteous, paranoid, and determined to punish Bonaparte any way he can. Since by now the exile is Our Great Friend to the Balcombes, this makes their connection a matter of state, with potentially disastrous consequences for William and his family. The narrative drops hints about this–Betsy narrates from retrospect–so it comes as no surprise. But if I can say this about a writer I admire as much as Thomas Keneally, I’d prefer he just tell the story. No portents necessary, here.