James Thurber once wrote about a vicious, ill-tempered Airedale, of which he observed that there was a slight advantage living in the same house, because Muggs didn’t bite the family as often as he bit strangers.

Unfortunately for Marguerite de Valois, the heroine of this novel, there’s little advantage in being Cathérine de Médicis’ youngest daughter, and no humor, however dark, to comfort her. The Queen Mother, the real power in late sixteenth-century France behind her weak-willed, ineffectual son, Charles (portrayed here with symptoms of manic depression), spares no one. Though an able, decisive leader, not for nothing is Cathérine known as La Serpente, and nobody feels the venom more than Marguerite, a beautiful, curious, intelligent child.

Marguerite, who can’t believe that maman cares about her only to the extent that she can marry the girl off for political advantage, redoubles her efforts to please. Naturally, too, this gets her nowhere, because she can never be pleasing enough, and any sign of hesitation to obey, let alone have her own mind, dooms her to punishment, which of course Marguerite turns against herself. She must be wrong. Maybe she even harbors sinful desires that prevent her from being properly dutiful. Otherwise, why would her family, who love her, treat her like that?

Trouble is, though Marguerite readily accepts her position as a diplomatic pawn and yearns to have a royal husband and a crown, her carefully tutored notions of morality and sin clash with what she sees at court. When she happens on her elder brother, Henri, having sex with a lady-in-waiting, Marguerite asks her mother whether she intends to stop it. Of course not, Madame says.

It is to your advantage to permit and ignore those women who are least dangerous–those less clever than you, lacking connections, or with personal attributes which presage a short tenure. A woman who a man will soon tire of is no serious threat.

Cathérine speaks from experience; when she first came to France from Italy, she had to put up with Diane de Poitiers, her late husband’s mistress. Nevertheless, “Had I arrived and found His Majesty without a mistress, I would have made it my business to steer him toward a woman loyal to myself. One must be clever where there is a husband to be managed.” Her daughter is appalled, though she doesn’t say so.

But there’s more pressing business. Catholic and Protestant are at each others’ throats, and the conflict, occasionally breaking out into open warfare, divides the kingdom. The Valois monarchy, caught between the need for internal order and the wish to wipe out the Protestants–a project that many French subjects are itching to carry out–leads to twisting, double-edged alliances and a deep insecurity. Marguerite vaults herself into the hurricane by conducting a torrid, clandestine affair with the duc de Guise, a Catholic champion from Lorraine viewed as an upstart by the Valois. 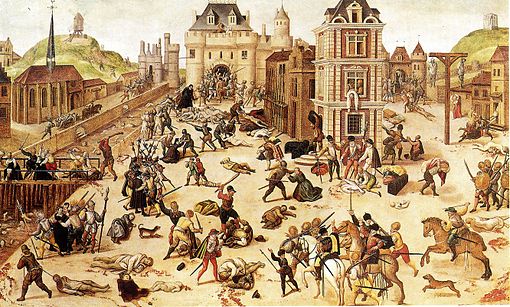 I like how Perinot handles the Valois family dynamics. The way Cathérine coddles her eldest son while essentially emasculating him seems real, as does her blind preference for Marguerite’s older brother, Henri, a narcissistic jackass of the highest order. The affair with de Guise gradually reveals sides of Marguerite’s lover that she’d rather not have seen, yet he can rightfully protest that she also values him for those qualities, or once did. Best of all, I like how Perinot portrays Marguerite’s early married days with a husband she detests; those familiar with the history will recognize how mistaken Marguerite is, and how he’s worth ten of anyone else.

That said, there are serious flaws in Médicis Daughter, chief of which is that the first eighty pages are largely irrelevant and slow the pace. The later narrative repeats what you need to know about the characters anyway, whereas the ending feels somewhat abrupt and could have used more space. The writing, though often fluid, occasionally stumbles because of a heavy hand, as when Marguerite’s first-person narration underlines a point already made. At times, Perinot explains when she should show, and the racing pulse and sharp inhalations are formulaic expressions of emotion, curiously so when the author has drawn her characters so astutely. One oddity is the random French word or phrase dropped into dialogue, which seems to have no purpose; another is the use of current colloquialisms, like call out, impact, or according to her script. No doubt sixteenth-century royalty used idioms like the rest of us, just not the same ones.

Still, there’s much to like about Médicis Daughter, and I think readers who stay with it will be rewarded.