One cold night in 1407, assassins attack Louis, Duke of Orléans, on a Parisian street and leave his dead, mutilated body in the mud. The news shocks Paris to the core, and no wonder. Louis was not only brother to King Charles VI and one of four richest, most powerful peers of the realm. He was also the de facto king whenever Charles slipped into “fits of madness,” what today would be called schizophrenia. Since those fits happened often and could last months or years, Louis was the king’s right hand as well as his nearest blood relative, which makes his murder an attack on the throne itself. Is this an isolated crime, people wonder, or a prelude to more violence, even civil war?

Blood Royal proves the old adage about truth being stranger than fiction. The killers know their man, for they set upon Louis after he makes a regular nocturnal visit to his sister-in-law’s palace. Was he actually sleeping with Queen Isabeau? Could King Charles, in a lucid moment, have decided to kill him in revenge? If so, Charles was one of many cuckolded husbands in Louis’s wake, and though he often got away with it because of the rich gifts he lavished on these men, he was also known to delight in shaming them. A knight from Picardy named Albert de Chauny, for example, swore undying enmity because of an incident that became so infamous that the great nineteenth-century painter Eugène Delacroix memorialized it on canvas. 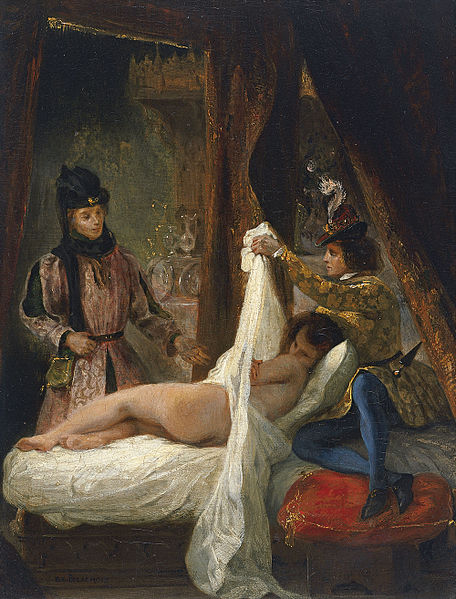 But whoever plotted to kill Louis could have had any number of motives. The duke of Orléans was power-hungry and flamboyant in displaying his wealth through absurdly lavish entertainments and vanity building projects. To pay for his excesses, he helped himself to the royal treasury, like as not inflicting new taxes that made him extremely unpopular. So if there was one logical suspect in his murder, there were dozens.

The man tasked with unraveling this intricate, politically volatile mystery is the provost of Paris, Guillaume de Tignonville. This is the part of Blood Royal that I like best, the process of investigation that reveals as much about the time and place as it does about the crime. The witnesses include a cross-section of the populace — a cobbler’s wife, water carriers, barbers, an architect’s wife and daughter, a baker, and so on. By examining their testimony, recorded on a parchment lost for more than two centuries, Jager reconstructs the crime as it unfolds; relates fascinating, relevant sidelights about the witnesses’ professions; decides who answers forthrightly and who are trying too hard to save their skins; and why, with so many onlookers, Guillaume has such trouble identifying the assassins. (Hint: Ordinances regarding the nightly curfew and fire prevention are partly to blame.) Most remarkable, perhaps, is that Guillaume prefers to sweat the details of investigation and rely on logic and observation rather than torture the witnesses, which he could easily have done instead.

Throughout the narrative, Jager shows a vivid grasp of everyday life in fifteenth-century Paris, a city of one hundred thousand people. I particularly like this passage describing the Châtelet, where Guillaume conducts his inquiry:

… legal documents lay piled up throughout the old fortress, stacked on wooden tables and writing desks, sorted onto shelves, cubbyholed in armoires, and stuffed into storerooms, along with the various tools used to make them — goose quills widened and hardened by heat, silver penknives, black-stained ink pots, pumice for smoothing parchment, and polished wooden rulers and shiny metal styli for scoring straight lines across freshly cut sheets of white, virgin calfskin. Whole herds of cows and hillsides full of sheep had been slaughtered and skinned to make these records of human misdeeds, entire flocks of geese had been plucked, and huge numbers of oak galls had been laboriously collected and boiled down to produce barrels of ink.

The unmasking of the murderers comes as a slight anticlimax – history is unkind to dramatic convention, here — but Jager more than makes up for it by recounting what happens afterward. The civil war that ensues offers Henry V of England the chance he’s been waiting for to invade, and the reader quickly learns how gross a propaganda job Shakespeare did to glorify “warlike Harry.” Likewise, the powerful duke of Burgundy, whom history knows as Jean sans Peur (John the Fearless) could as well have been nicknamed Jean sans Scrupules.

I could have done without the “must have felt” that intrudes on the narrative. Call me old-fashioned, but I’m with Barbara Tuchman on this one. If the historical record doesn’t say how someone felt, the historian has no business inventing it; let the reader draw the inference.

But Blood Royal is a fabulous book. You couldn’t make this stuff up.