What a marvelous bunch these Melvilles are, minor Hampshire aristocracy who keep the new twentieth century at arm’s length. Sir Aubrey Melville, Bart., cares for nothing except his estate, Ellinghurst, whose manse is an architectural oddity, and whose three-hundred-year history he’s been writing forever. As for Lady Melville, if snobbery were a lethal weapon, she’d have as much blood on her hands as Jack the Ripper. The Melville children–Theo, Phyllis, and Jessica, in descending order–know her as Eleanor, the only intimacy she allows them, though Theo occupies a throne in her heart. Phyllis has withdrawn from the family in favor of books, angering Jessica in particular, who craves excitement and dotes on Theo, a selfish, mercurial bully who likes nothing better than to take horrifying risks and push others to do likewise.

The lonely sailor trying to stay afloat in this maelstrom of dysfunction is Oskar Grunewald, a fatherless young boy, son of a family friend. When in the Melville children’s company, he’s either ignored or targeted for abuse, just as he is at school. But you know he’ll be the hinge on which the narrative turns; the typically pointless prologue tells you so. And you also know, because of the title, the year the real action begins (1910), and an epigraph dating from the First World War, that the Melvilles are in for it. We That Are Left evokes a familiar theme in fiction, Edwardian gentry struggling to understand–or, more accurately, refusing to understand–that they’re dinosaurs. Untimely death and estate taxes will destroy their way of life, but more than that, unavoidable social changes are coming, and their cosseted world will never be the same. 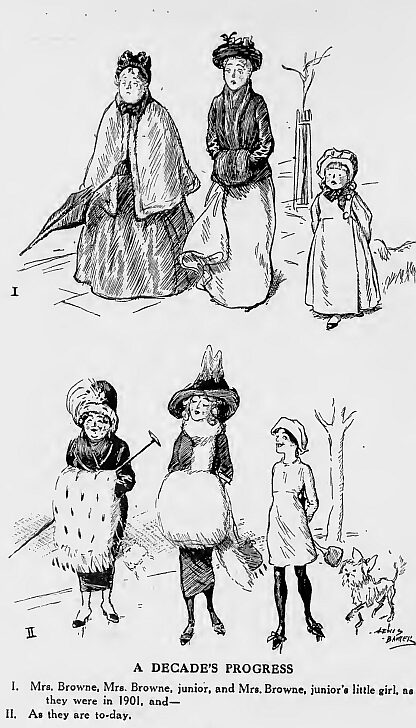 Punch cartoon satirizing the changes in women’s dress, 1901-11, published in the U.S., 1921 (courtesy Wikimedia Commons; public domain in the U.S.)

But if this message sounds familiar, as narrated in, say, Philip Rock’s Passing Bells, Clark goes much deeper. Her characters live what they say and believe, so that you never feel they’re talking heads, a collection of opinions. With one exception, Clark reveals their inner lives so naturally and vividly that in understanding them, you see their milieu and its ferment as clearly as if you were standing there. And since most of her characters other than Oskar are disagreeable, it’s a rare feat to make them compelling, let alone to stretch their story to 450 pages and keep you riveted. How does she do this? One passage, from Oskar’s perspective, gives a glimpse:

It was as if the nerves in him had been magnetised, irresistibly drawing sensation to his eyes, his lungs, his brain, his skin, until the intensity of it was almost too much to bear. He walked along the familiar streets in a daze of seeing, overcome by the greenness of the lawns and the blueness of the sky and the perfect pewter gleam of the cobbles beneath his feet, struck time and again by the loveliness of things he had somehow never noticed before: the round glass panes in an overhanging upper window like bottoms of bottles, the splintery grey grain of a warped medieval lintel, the straining neck and gripping claws of a pockmarked gargoyle clinging for dear life to a narrow ledge, its mouth stretched wide and its veined wings raised and half-opened, ready for flight. He had not thought the world so full of ordinary marvels.

Oskar’s in love, of course. But Clark never has to tell you that; she renders a primary emotion in its full physical intensity, without any mention of rapid heartbeat or breath. (That Oskar’s studying physics accounts for the metaphors about magnetism and colors.) I admire this artistry very much, which goes far beyond use of prose, and certainly not the kind that explodes like fireworks or calls attention to itself, which Clark’s doesn’t anyway. Rather, I enter Oskar’s mind and heart, just as I do those of the less sympathetic characters like Jessica, who’s selfish, spoiled, and manipulative. I don’t have to like her, but I can see her point of view and care about how she learns about life.

That said, not everyone will sit still for a long, character-driven novel, especially one that takes fifty pages to get going. There’s too much talk of theoretical physics, which, aside from being technical, rather too baldly fits the theme of the laws of nature challenged. And though Clark stands above many authors I’ve read recently for her gift at writing character, she’s taken shortcuts with Eleanor, who’s got little to show except her obsessive love for Theo, her only boy. It’s also startling that the ending, though prefigured by the needless prologue, feels like an improbable reversal, almost Dickensian in content, and melodramatic besides.

Even so, I enjoyed We That Are Left and learned something about writing novels.