A man sits, tied up, being tortured to divulge who killed a certain figure from the Bordeaux crime world. This figure, like most of his brethren during the late 1950s — like the police beating him up — collaborated with the Germans during the recent world war and profited from it. In fact, few profited as handsomely as Albert Darlac, the commissaire de police, and the man leading the interrogation. Jewels, art, and furniture taken from dispossessed Jews made him rich, and without a trace of compunction or remorse, he can say that his department would cease to exist if such activities disqualified a man from serving the law. 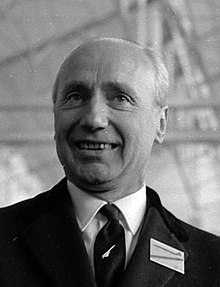 Maurice Poupon, member of the Legion of Honor and illustrious politician in the Gaullist government, 1967. As a Bordeaux police official during World War II, he had arranged for the deportation of more than 1600 Jews; during the Algerian War for independence, he allegedly tortured rebel prisoners (courtesy Archives municipales de Toulouse via Wikimedia Commons; public domain)

Meanwhile, Daniel, a twenty-year-old garage mechanic who lost his parents at Auschwitz, has terrible trouble understanding the ache inside him. His adoptive parents, former Resistance members who rescued him from a rooftop the day his biological parents were arrested, have protected him and given him a warm home. Their daughter, Irène, also adopted, is the only person to whom Daniel can show any vulnerability. But Daniel fears that this happy life — happy, considering his circumstances — will soon end. He’s due to receive his draft notice and fight in Algeria, in a colonial war his friends and family staunchly oppose.

Darlac and Daniel, victim and perpetrator, don’t meet for quite a while. The contrasts between them provide the context and the moral theme of this extraordinary, exceedingly violent narrative. Darlac scorns everything remotely resembling compassion or kindness as weakness that deserves to be crushed. As one old-time acquaintance says, “Other people die and you’re the one that smells like a rotting carcass.” Daniel, however, wishes he could make himself more accessible emotionally — not that he entirely realizes this, a superb stroke of characterization — and often hides inside movie images, which he’s constantly imagining in his daily life. But you know that once he reaches Algeria, his struggles to become fully human will only get more desperate.

Connecting the two, a figure from their pasts has come to Bordeaux to settle old scores. How Darlac reacts in particular provides much of the story, and a searing one it is. Any author can follow Raymond Chandler’s advice and have a man with a gun enter the scene to prevent tension from flagging. Le Corre has plenty of men with guns, but he doesn’t have to worry about the tension. It’s not just that stuff happens, because if it were only that, a hyperactive plot would do as well. No; he grounds every scene so thoroughly in the physical that you can’t help feeling that his narrative is happening all around you, and that you’re involved by turning the pages. Whether it’s the Bordeaux docks or the Algerian desert, Le Corre knows every inch of his territory, and how it feels to be there, so you do too.

But even that wouldn’t work if he didn’t also put you firmly in his narrators’ heads, as with this introduction to Daniel, which also happens to portray the port of Bordeaux:

He stops suddenly in front of the gates of the port, his bicycle between his legs, and remains there, stunned. With his balaclava and his sheepskin coat with the collar turned up and the mittens on his hands gripping the handle bars, only his eyes are visible. He observes the blaring traffic of cars and trucks, intoxicated by the din they make, grinding his teeth as axles groan and bodies shake over the large cobblestones… He feels the dull rumble in his legs as a train trundles slowly past endless rows of warehouses, accompanied on foot by a man swinging a lantern in his hand. The city buzzes and trembles in his flesh.

Many people will find After the War a bloody business — and so it is, because the title’s ironic. Wars merge, so that there’s no apparent space between one and the next, no aftermath, because even if the calendar says that a few years have passed, in men’s minds, they haven’t. Darlac is also a complete monster, so he’s hard to take. But it was that kind of monster who made the French portion of the Holocaust possible, a fact conveniently ignored in France. Rather, I’m more troubled by the way female characters seem to exist largely in a man’s perception, not necessarily as sex objects, though in Darlac’s case, that’s all they are, but without readily definable aspirations of their own. They’re invariably the kindest characters, but they’re not fully rendered, not like the men.

Nevertheless, if you like noir, After the War is as noir as it gets, a first-rate thriller by an author who understands how to put it all together.