When would-be artist Frances Marion flees San Francisco for Los Angeles in 1914, the last thing she anticipates is falling in with the crowd of hopefuls knocking on the doors of those who produce “flickers,” as movies are popularly called. But Frances catches the bug too, and in a great stroke of luck, gains an introduction to Mary Pickford, the most beloved actress in America, who also has artistic control over her films. Luckier still, Mary and Frances take to one another on sight, and a famous partnership begins. With Marion as her screenwriter, Pickford will go on to even more dazzling heights, playing young girls in her famous blond curls and rosebud lips. 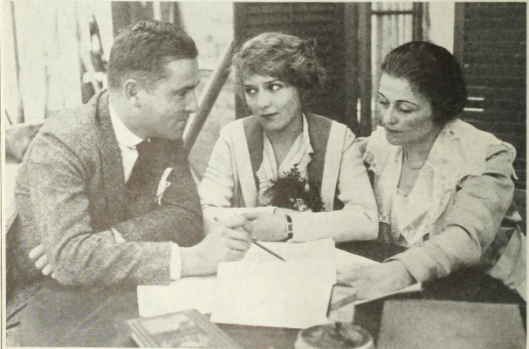 Frances’s first look at Hollywood may be idealized, but it sets the stage for what follows:

Far from being a barren cow town, the place seemed drenched in color, crimson and gold and purple and white flowers spilling out of every window box, embracing every streetlamp. I couldn’t stop gazing at the tall pepper trees, with their languid, lacy green leaves dripping with clusters of red berries, providing much-needed shade from a sun that rarely found a cloud behind which to hide — something this native San Franciscan thought she would never find tiresome. Orange groves dominated the mountainous landscape that sloped to the beckoning sea, the air so perfumed that I immediately craved the sweet, tangy fruit that I’d never really cared for before.

Naturally, La-La Land can’t remain milk and honey forever, with such large egos, salaries, and audiences in which to bask. And that is by no means the whole picture. As women at the peaks of their respective professions, Pickford and Marion become easy targets for jealousy and slander, with others waiting — hoping — for their fall, men in particular. The two friends often talk about such conniving men and vow they’ll never let a man come between them. Famous last words.

However, it’s not just the man-child Douglas Fairbanks who splits the friendship when he marries Mary, and whose powers of jealous manipulation know no limit. Within a few years, the advent of talkies overturns the silent screen, casting out those performers who can’t cope in the new medium (or are perceived incapable of it). Further, as producers consolidate their power—and the industry—they retain artistic control and subjugate their hired talent, women especially.

This history both enlivens The Girls in the Picture and undoes it. I like the behind-the-scenes action that describes how movies are made, for both the silent and sound eras. I’m also glad to learn how the studio system today got its start, and the how its rampant sexism has very old roots. But these events and themes, significant though they are, fail here to make a novel.

The narrative, though talky enough, rests on simplistic characterizations that bounce between two poles instead of bumping up against edges. In almost any scene, the reader may ask, will Mary be the girl who never had a proper childhood, and who grasps at her popularity to prop her up? Or will the generous, sensitive adult shine through for her friend Frances, with whom she shares an artistic outlook and ardent feminist sensibilities? As facts and viewpoints repeat themselves, the conflict plays out from A to B and back.

The story also seems too simple. Love happens at first sight, and so does hatred. Conflict lasts a few paragraphs, and just when you think, Now, we’re getting somewhere, the rift resolves somehow. Benjamin offers the “no,” but not the “furthermore,” maybe because the story must move on to the next script, the next year. Round about page 260, the threat that Fairbanks poses to the women’s friendship emerges, and for a while, the trouble percolates and deepens. But for some reason, Frances, who’s capable of holding her own with just about anybody, can never manage with Mary. Benjamin, who says that she has made up all the dialogue, seems unable to let her stars go.

Some of these problems may have to do with biographical fiction and its constraints, but there are other, more successful approaches to Hollywood, as with The Chaperone, about Louise Brooks, a lesser silent film star. The Girls in the Picture aspires to a more panoramic view, which is fine; in a different framework, that might work. But despite a large cast, this novel stays a two shot, Pickford and Marion, which poses limits, and their long internal monologues feel predictable and repetitive, especially Pickford’s. As for color, the cameos the jacket promises are similarly flat, except for that of the entirely self-absorbed lech, Louis B. Mayer.

The Girls in the Picture has whetted my interest in reading about early Hollywood history, so I’ll say that. If that’s what you’re looking for, maybe this book is for you; but I can’t recommend it as a novel.