If I were to describe a thriller whose central incident doesn’t happen until around page 200, and whose back-story-laden narrative revolves around an essentially harmless, flamboyantly foolish turncoat spy, you would likely decide that the book was a plodding, pointless tale, not worth your time.

In this case, though, you’d be wrong. The back story reveals England of the Thirties, Forties, and Fifties with remarkable vividness, brio, and wit, focusing on, among other issues, laws and prejudice against homosexual behavior, and the equally prejudiced mindset about national security and how to act in its name. You see these come alive through a compelling protagonist, Frederick Troy, not your ordinary copper. Born to Russian émigrés under the name Troitsky, Troy, as even his girlfriends call him, walked away from a scholarship to Oxford to join the London police force and serve in the East End, a tough patch. Recruited to Scotland Yard above more experienced candidates in the late 1930s, he has been solving murders ever since, up until 1958, when the forward action of Friends and Traitors begins. Like many fictional detectives, he sails very close to the wind, and unscrupulous, vicious characters have a way of disappearing when he’s around, whether they belong to the police force or the criminals. So far, he has covered his tracks, but not without attracting suspicion. 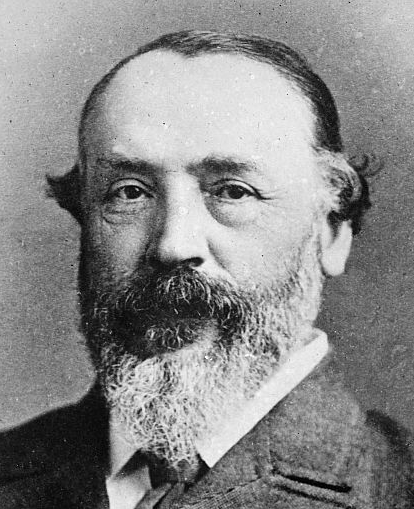 Henry_Labouchère, the British parliamentarian whose amendment to an 1885 law intended to combat prostitution made “gross indecency” between males a criminal act. During the 1940s and 1950s especially, the police went out of their way to enforce it.

What threatens to undo Troy at this juncture is his friendship with Guy Burgess, later known as a member of the infamous Cambridge Five spy ring; but, as this portrayal would have it, Burgess is very much a junior partner in that game. Still, when he defects with Donald Maclean in 1951, their flight embarrasses and surprises the British intelligence community and causes a rift with its American counterparts. Troy, who has known Burgess for decades, first through family connections, and later because the man keeps crossing his path like a bad penny, has always been suspect for this association. But Troy thinks that what MI5 and Special Branch really object to, aside from shame at their own lapse, is Burgess’s unapologetic, open homosexuality, which to Troy shouldn’t be considered a crime.

Moreover, Burgess’s inability to keep a secret, and the relatively short time he was working for the Foreign Office, suggest he’s not much of a threat. Self-absorbed, boorish, insulting, and vain, yes; but since when are those qualities treasonous? Nevertheless, when Burgess lets it be known in 1958 that he wishes to return to England, several people whom both he and Troy know wind up dead, and others are running scared, including at least one former lover of Troy’s.

From there, the pieces that Lawton has laid in place with seeming casualness turn out to matter in ingenious, unexpected ways, so cleverly that not even Troy understands the depth of his troubles before they arrive. The sentence, “Someone was following Troy,” recurs constantly. For a man of his experience, that’s almost an insult. And since he never takes his medicine quietly, he leads his watchdogs in Special Branch up hill and down dale, at one point leaving a Lewis Carroll poem in a tree for them to puzzle over. Very snarky. But what else would you expect from the youngest child with two twin sisters named Sasha and Masha, each of whom has a particular brand of acting badly, and an oh-so-righteous older brother, Battle of Britain hero, member of Parliament, and all that, who may be prime minister one day? It’s always been Troy’s job to be different in a family of individualists, and he does so with a sharp sense of humor.

Then there’s the prose, which evokes myriad times and places, as with this description of the London Blitz:

It seemed to Troy that the night sky was short on sky’s own colour — blue. Reds it had aplenty, from the bright, post-office-van scarlet of the flames that leapt heavenward from burning buildings to the colouring-book-and-wax-crayon carmine of tracers and the paintbox burnt orange of ack-ack shells popping uselessly among the beaten-metal pewter hue of the barrage balloons. Incendiaries burnt white to silver, and the searchlights sliced up the night with long fingers of pure, clear light. Rarely had he seen a plane hit, either ours or theirs, but when it happened every colour in the rainbow might burst forth.

My only quibble is Burgess himself, who’s so unappealing that if I were Troy, I’d run in the other direction. At times Troy does, yet he also seems fascinated, and I’m not sure why. Burgess’s willingness to say what no one else will? Troy’s stubborn refusal to shun a man whom his conventional older brother has warned him about? Hard to know, but I still recommend Friends and Traitors.

Review: Fall of Man in Wilmslow, by David Lagercrantz
Translated from the Swedish by George Goulding
Knopf, 2016. 354 pp. $27

Like Alan Turing himself, the extraordinary mathematician and cryptanalyst whose life forms the premise of this novel, Lagercrantz’s narrative is often brilliant but fails to realize its promise. In Turing’s case, his apparent suicide by poisoning in June 1954 ended a life of spectacular accomplishment while he was still young. In the novel, the mystery quickly swims away like a red herring, and the focus shifts, a setback for the reader, who may be forgiven for expecting that the narrative will identify who might have wanted to murder Turing and build a case for or against.

Instead, you get a sort of coming-of-age story about the detective who investigates, a character almost as annoying and socially inept as Turing, but who has talent of his own, submerged under a mountain of self-hatred. Leonard Corell is twenty-eight but hardly formed, conscious that he was meant for better things than to be a policeman in a backwater like Wilmslow, a town near Manchester, yet also believes he deserves nothing else. Leonard has no friends, has never had a romance, was bullied at school (which he never finished, for lack of will), and is often irritable with colleagues who try to be friendly. Just the kind of person you’d want to spend a few hours reading about, right?

Indeed, if that were all, Fall of Man in Wilmslow would be a dreary book, too much to finish. Yet Leonard learns to grow into his skin–haltingly, to be sure, a process rife with sharp elbows given and taken. He has a long way to go, and Lagercrantz’s portrait is terrifying in its depth and detail. Leonard’s father, now dead, was a narcissist who drew constant attention to himself through exaggerated stories and antics, such as announcing, on entering a room, “What a delightful gathering! May a simple man such as I join your company?” Required to revolve around this sun like an outer planet in perpetual shadow, Leonard grew up feeling that he would never be good enough. Yet, at the same time, he fantasized coming up “with an idea, a great thought which would revolutionise the world.”

What the reader knows, though Leonard doesn’t, is that Turing was just such a thinker. Not only did he develop the theory and mechanical means to crack German codes during World War II, he framed the mathematical theories that have given us computers. But Leonard, though groping in the dark, can tell that Turing was special, and you sense that in attempting to grasp how such an accomplished person could poison himself, and what Turing was trying to say about life, the young detective will change.

Turing was homosexual and prosecuted for it, victim of both homophobia and hysteria over national security. The Cambridge ring of Soviet agents (which Helen Dunmore wrote about in Exposed, from a different, later perspective) included several homosexuals, about whom it was presumed that they were led to their treason by immorality, an unnatural affinity for communism, or desire to destroy the world. Since only highly placed intelligence officers know what Turing did during World War II, most people who hear his name, including the Wilmslow constabulary, assume that he must be a danger to society because he’s gay. And the intelligence community, many of whose less enlightened denizens wonder whether Turing ever passed information to the Soviets, becomes very curious about this young policeman who asks a lot of questions.

They don’t realize what Leonard’s after, or where he wants to go. But the reader sees that he starts out sharing the common prejudices and comes to recognize the hypocrisy in himself and others. He gets there, in part, through long discussions of mathematical principles and of Turing’s life and character. These can be long, interesting though they often are, and feel like explanations, another weakness of the narrative, which tells too much instead of showing it. Nevertheless, Fall of Man in Wilmslow has tension to spare, because Lagercrantz occupies Leonard’s head so convincingly, and the young man is fit to burst with discovery and feelings he can’t manage.

I know nothing about math or cybernetics, and I don’t think you need to be passionate about either to appreciate Fall of Man in Wilmslow. However, if you’re looking for a mystery, this is one of character, not who done it, and that may be a letdown.