The Rajah sets sail from London in 1841 with one hundred eighty women on board, all convicted of crimes bearing the punishment of transportation. In what’s widely seen as great mercy, they’ll get a chance to redeem themselves in Australia. The modern reader considers that and wonders what kind of society banishes people for petty thievery; Adams wants us to see that irony.

Not that these convicts are easy to like. They’re a rough lot, most of them, cynical about the world that has given them the back of its hand and the men who run it, with good reason. Combative, hard, and schooled not to show tender feeling, they expect cruelty and can dish it out. And indeed one does, for a woman is stabbed, and as she lies comatose, her life in the balance, wheels turn. 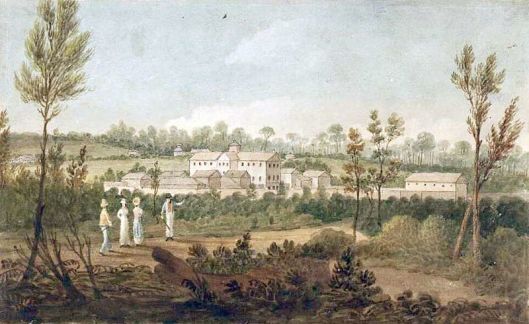 Captain Ferguson decides that before the Rajah reaches Van Diemen’s Land, the attacker’s identity must be found. To assist him, he has Mr. Davies, a clergyman; Mr. Donovan, a naval surgeon; and Kezia Hayter, a proper middle-class woman who serves as matron for the women aboard, and through whose eyes Adams tells much of the narrative.

Kezia had always thought of Hell as a place of leaping fire and demons with pitchforks, but the first time she’d entered a prison, she’d changed her mind. The damp, squalid cells in Millbank Prison, where women cried out and uttered obscene words, where there was no bright color, only gray and brown and black, that had seemed a new kind of Hell, the opposite of everything that was pleasant and good. The sunshine, when it found a way through the high, grimy windows, had cast no more than a pale glimmer on floors filthy with dropped food, spilled slop buckets and rat droppings. What light there was illuminated tear-streaked cheeks, lank hair and eyes full of grief.

From the get-go, Davies, who looks down on women in general and female convicts most of all, wonders why Kezia even has an opinion about the inquiry or why she should be allowed to express it. Donovan and Ferguson, pointing out her knowledge of the women, seem more thoughtful and accepting — rather too much, I think — but for most of the novel, it hardly matters. All the women questioned give the same account of the stabbing, and the investigators uncover little they didn’t already know.

Nothing like a shipboard murder — or murder attempt — to propel a narrative, and among women who’ve led desperate lives and have no idea what awaits them in Australia, there’s much potential for tension. Kezia has also come aboard with a mission: to select enough capable needlewomen among the convicts to make a quilt. She hopes that producing a work of beauty will uplift her charges, and that communal labor (accompanied by hymns) will lead them on a more righteous path.

However, despite the possibilities, Dangerous Women founders, maybe because Adams tries to do too much. She wants us to know, in detail, how the women come to be there, and how the legal system discriminates against the poor, women worst of all. Fair enough. But these biographies neither advance the plot nor create much tension; they’re often intriguing, but no more than that, and sometimes rely too heavily on interior monologue. That makes me wonder whether pieces of that information, and certainly the themes and attitudes depicted, could have been replicated on board ship, skipping much of the back story.

Rather, to accommodate these women’s histories, the narrative keeps cutting away from the present, the tried-and-true diversion to create tension, but which here proves false, merely annoying. The mystery plot, which begins with such promise, loses steam and never really recovers. I get the impression that Adams cares more about the quilt and the women’s pasts. But if so, why have the mystery at all? It only sets up expectations that a hasty, convenient confession toward the end does little to satisfy, a trite convention unworthy of such a premise.

I’d have liked Dangerous Women better had the novel concentrated on two or three characters, deepened them, intertwined their shipboard lives, and played out the mystery concurrent with revelations about the past. All the suspects have every reason to mistrust their fellows and the law. Had Kezia assumed a more active (or effective) role as sleuth, admittedly difficult for a Victorian woman who takes her religion neat—but nevertheless possible given her character—she’d have discovered truths about the women’s lives. That would have given her the chance to wrestle with more challenges, let her grow more fully.

As it is, Adams focuses on Kezia’s own reasons for wishing to leave England and her struggle to make her voice heard as a woman. Again, there’s nothing wrong with that. But that limitation holds back the narrative, which never rises above an occasionally enlightening window on poor women’s lives in mid-nineteenth century England. The novel could have offered so much more.