In April 1857, Jasper Lightner, star detective of the London police force and keen student of scientific methods, faces a crisis that threatens his career. His obdurate father, a duke who’s found fault with his second son forever, believes that Jasper’s chosen profession stains the family escutcheon. But since His Lordship can’t deter his wayward progeny by cutting off his allowance — an aunt has conveniently left Jasper a sizable legacy — he applies political pressure instead. The duke gives Jasper an ultimatum: leave the police force or go to (ugh!) New York and teach the colonial upstarts how to sleuth properly, if he likes.

Jasper doesn’t particularly like — his imperious valet, Paisley, likes it even less — but our hero accepts the journey as an adventure. What he doesn’t know and couldn’t possibly anticipate, no sooner has he landed than he realizes he’s walked into a snake pit. Not only does every copper in the city resent him on sight, whether for his nationality (they’re Irish), reverse snobbery about his class, or because they believe that the interloper will expose the incredible corruption they take as their right.

The nonstop political turf war, with gangs, Tammany Hall, and rivalries within the force, may turn violent any second; woe betide the newcomer, who can’t know whose toes he’s just stepped on. And oh, by the way, someone’s cutting through the ranks of the city’s wealthiest men, killing them in copycat fashion, with garrotte and knife. The mayor wants these murders solved yesterday.

Absence of Mercy, the first of a promised series, wades into this donnybrook with gusto. If you like complicated mysteries in which bodies fall by the day, perceptions change by the hour, and the gritty atmosphere could be packed into a ball and used to scrape rust, you’ll find your pleasures here. 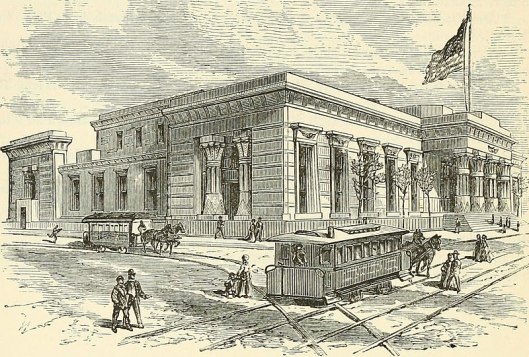 A woodcut from 1870 shows the Criminal Court in lower Manhattan. The complex included an infamous prison known as The Tombs, built in 1835. The author of this novel portrays what it was like inside (courtesy Corporation of the City of New York via Wikimedia Commons; public domain)

But clever as the plot is — at times, too clever for me to follow — the most winning aspect of this novel is its protagonist. I’ve never encountered a detective like Jasper Lightner, and maybe you haven’t, either. You might suppose that a thumbnail sketch of his past reminds you of a cross-genre James Bond. Handsome? Check. Suave? You got it. Throw in his impeccable manners, refusal to rise to the insults that his legion of enemies hurls at him, and magnetism for women, and you’ve just about spelled trope. Do I need to mention that he’s a veteran of the Crimea, a survivor of the charge of the Light Brigade, and trained to become a doctor, only to abandon his studies shortly before completing them?

But hold on. This paragon stutters, badly, except in the rare moments when he allows himself anger. Paisley, his valet, scares him. Jasper’s former fiancée married his brother. He suffers nightmares because of that infamous charge, and he hates that Tennyson wrote a poem about it. He still carries shrapnel from the battle, and to dull his pains, physical and emotional, he favors madak, tobacco laced with opium. Most importantly, despite his social gifts, sensitivity, and kindness, he can’t abide intimacy:

Surviving childhood with the duke had been very much like protecting a castle from invaders. Over the years Jasper had become an expert at repelling attacks, repairing breaches, and strengthening defenses while he waited his father’s next offensive. Now, in his thirties, his castle walls were impregnable. Thanks to the duke, nothing — and nobody — could ever get close enough to hurt him.

Consequently, Jasper pulls you in thoroughly, and you’ll need that connection as your compass, because Absence of Mercy visits the most degraded locales in a filthy metropolis. Goodwin lovingly portrays the muck, stench, and horror of New York life for the teeming underclass less than a mile from Fifth Avenue, but who might as well inhabit another planet. Life’s hard, and a man like Jasper, who believes in justice, has his work cut out for him.

Aside from occasionally losing the threads tying motive to crime and the timing of who said or did what, when, I find this novel absolutely engrossing. Every once in a while, the diction slips, as Jasper speaks like an American, whereas his American assistant, a detective improbably named Hieronymus (Hy) Law, talks like an Englishman. But despite that, Goodwin’s a careful writer with a gift for creating vivid scenes and a sense of history, for the narrative takes place during the years of the Fugitive Slave Act, which figures in the story and puzzles our English protagonist.

If you go along for the ride, don’t be alarmed if the odd detail puzzles you. Let yourself be swept along, and you’ll be rewarded.

Jacob Flint, a young man on the make in 1930 London, has a way of winding up at murder scenes before the police do. For an ambitious journalist, such luck can be a gold mine, the source of scoops that rock the city and make his name. However, that particular happenstance also rouses suspicions from the police, who, though unimaginative — aren’t they always? — assume it’s no coincidence at all. Further, the perpetrators of these crimes, whoever they are, seem methodical, persistent, and absolutely ruthless, so that witnesses have a way of disappearing. Consequently, Jacob’s good fortune could be hazardous to his health.

Further, as he tries to piece together the killings, which seem to multiply before his eyes in the most unlikely circumstances, he keeps crossing paths with the mysterious Rachel Savernake — or almost does. The wealthy, reclusive Miss Savernake shows her lovely face only when she wishes, for as long as she wishes, and to select few. Jacob tries frequently to get in touch with her, but he succeeds only when she grants permission, and only on her terms. 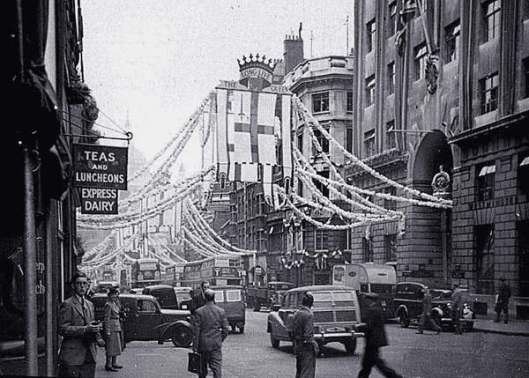 Jacob believes she’s the thread that connects the murders; she even presented the solution to one of them to the police. Her ability, intelligence, and boldness make her an object of fear, admiration, and bafflement. Rumor says that as a teenager, she had her half-sister’s parents disposed of, on a whim. So what game is she playing? And why does she take an interest in Jacob, leading him — he thinks — to the scene of the next crime?

This is the elaborate premise for one of the most ingenious, Byzantine mysteries I’ve ever read. Normally I dislike mystery narratives in which bodies fall like overripe apples from a tree, especially if I sense that the story needs another corpse to keep the tension thrumming. Not so, here. Everything fits, and Jacob’s emotional reactions matter, not just how he plans his next move. Edwards doesn’t rush through those emotional transitions, and the novel benefits greatly.

I wouldn’t call Gallows Court character-driven or deeply thoughtful, yet Jacob has an inner life, with ambition warring against a sense of morality and fair play. He has an appealing urge to connect with other humans, even if he doesn’t always know how, and his shock when people in whom he’s placed his trust wind up betraying him feels genuine. When people he knows wind up dead, some of whom he called friend, he takes stock — not for long, necessarily, but so that you see his impulses. He also struggles to put forth his better nature when self-preservation or convenience pulls in another direction, as in this passage, when he visits a dying friend and colleague:

The stench of disinfectant and the coarse noise from the bed made Jacob’s flesh crawl. Not for the first time, he felt pangs of self-disgust. A man who had, in his no-nonsense way, been generous to him was close to death. Yet here he was, averting his eyes, holding his nose, struggling in vain to overcome revulsion. He uttered a silent, selfish prayer that Betts would not die while he sat by his bedside. How could he console the widow if the worst happened? It would seem like his fault.

Rachel’s much harder to figure, and though that follows logically from the author’s need to keep certain secrets, I could better understand Jacob’s fascination with her if her character came across more clearly. As it is, Rachel risks being a trope, the beautiful mastermind whom no one can get around, let alone fathom. She has a mission, it seems — which the reader divines before Jacob does — and which explains the profusion of deaths. That the mission attempts to strike a blow for justice helps some.

More importantly, Rachel provides the overriding sense of the novel, the confusion, uncertainty, and danger infusing the very air of the story. Just when Jacob believes that he sees how the wheels turn, he realizes that there are wheels within wheels. At best, he’s a minor cog, one that may intersect with a larger, more significant mechanism, but only as long as he’s useful. When pursuing a lead based on information given him, he never knows whether his informant has hidden motives or means him ill. This atmosphere of fear and uncertainty feels pervasive, as in Hitchcock, and the ever-present “no — and furthermore” applies the framework. But the workings are entirely psychological.

The last two turns of the wheel feel a little contrived, the only ones that do. Nevertheless, Gallows Court delivers a tense, wild ride, and if the ending seems a bit contrived, it’s also satisfying.