Justice (Justy) Flanagan, attorney at law, has returned to the Manhattan of his youth from Ireland, following his legal training and participation in the failed rebellion of 1798. He’s come to make his way in the world and to investigate his father’s suicide. But Justy, who found the body hanging from the rafters, has since learned more than most people care to hear about what violent death looks like, and the precise details he remembers from cutting his father down don’t square with his lessons in what we would call forensics. Moreover, given that his father was involved in an extremely risky financial speculation involving men far less scrupulous than himself, Justy reasonably concludes that motives for killing him abounded, as do suspects.

But Hirsch’s Manhattan in 1799 is a mucky, filthy place, and he’s not just talking about the condition of the streets. The language, Irish-American slang that fills a four-page glossary at the back, is pretty raw too. The title refers to Wall Street, a savage entity with no rules save caveat emptor, and where tempers are short, and memories, long. The stock exchange per se doesn’t exist yet, but trading happens in coffee houses, and a new one has risen specifically for that purpose. Hirsch wants you to read this portrayal, full of rich ruffians who detest even the thought of regulation (despite the Ponzi scheme that set off a catastrophic panic in 1792), so that you realize that little has changed.

This is where Hirsch excels. I find his portrayal of the city the most persuasive, gripping part of The Devil’s Half Mile. Whether depicting the racial tension between free blacks and Irish immigrants, the cut-and-thrust of corrupt finance, the gangs that act like private armies, the prostitution, common thievery, and violence that afflict all but the fortunate few, the squalor in which most people live, or the tiny enclaves of great wealth, the novel gives you New York in its gritty self:

Justy nodded farewell to his friend… He pushed his face into the gust of wind that carried the smell of the city down the hill to the docks. Woodsmoke from a thousand hearth fires, urine from the tanners’ shops, horse shit from the streets, sewage from the septic tanks, fresh blood from the abattoirs, rotting meat and produce from the tips. Bad breath, sour beer, raw spirits, stale sweat. It was like a pungent cloud rolling down the Broad Way to the water, a slap in the face of every newcomer who arrived in the city.
Justy smiled.
It was the smell of home.

Despite this vividness, however, the narrative of The Devil’s Half Mile has a mechanical feel that intrudes, though it’s not for want of plot points. There are plenty of twists and turns, right up to the end. Hirsch has apparently followed Raymond Chandler’s dictum that to restore flagging tension, send in a man with a gun. In this case, it’s more likely a corpse discovered or a knife fight, which gets predictable after a while. Even at that, Hirsch’s machinery might not matter, except that our hero, despite his powers of observation, remains remarkably dense about the obvious, such as the probable killers, the nature of the speculation that his father was involved in, or the mastermind behind all his troubles. Is it that he has to remain clueless until enough bodies fall? To his credit, Hirsch does the fight scenes well and is not squeamish about granting them their proper length, so if they’re a device, they’re a carefully polished one. However, like the grisly findings the sleuthing unearths, the spilling of blood requires emotional transitions from Justy — surprise, horror, the pain of treachery, or what have you — which zip past in clichéd language. His gut clenches, or his fist, a phrase announces that he has “raw feelings,” and the narrative moves on.

As such, Justy comes across as more shallow than he should, which is a shame. Hirsch tries to convey the depth to which violent fury possesses his protagonist, and how Justy’s physical skills may be useful in surviving, but not for living a satisfying life. It’s a worthy theme, especially when the author is after even bigger game; he wishes to connect the skill for violence with English prejudice against the Irish as savages fit only for doing dirty deeds or slaving at the docks. In that, The Devil’s Half Mile is a more ambitious book than it seems at first; but unfortunately, it never realizes its potential.

“The automobile business,” muses Jack McColl, the engaging British protagonist of this excellent thriller, “was not what it had been even two years before. . . . Spying, on the other hand, seemed an occupation with a promising future.”

If nothing else, Jack is prescient, for the year is 1913, and the infant secret services of Britain and Germany are gearing up for a war of which most Europeans have no inkling. It will be a global war, he senses, and indeed, his first assignment is to track German warships that have put in at Tsingtau, a German colony in China with its requisite population of spies. Jack’s being watched more carefully than he knows. 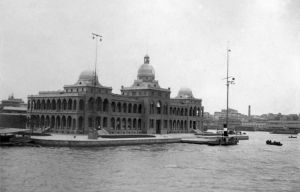 But he enjoys a dash of danger. Further, he realizes that selling luxury automobiles, his main job, will soon go the way of the dodo, thanks to Henry Ford and his Model T. Jack wants–or thinks he wants–a full-time position with his espionage organization, vaguely connected to the British Admiralty. But he goes back and forth, because his work to protect the empire challenges his political and moral beliefs in the rights of the poor and disenfranchised.

Already, this feels like new ground: a would-be spy who reflects on the bodies that fall in his wake. He tries to reconcile what he’s seen and done with the more abstract threat from German militarism and its leaders’ disrespect for the rights of others, and sometimes, he comes up empty. Even better, Jack’s work conflicts with his passion for the exquisite Caitlin Hanley, an American journalist he meets in China; among other tasks, he’s assigned to investigate links between German agents and Irish separatists whom Caitlin’s family supports. Her combination of progressive politics, will to change the world, and career ambition have smitten him, but for once, this is a spy novel in which the hero worries that the woman of his dreams doesn’t love him. She likely won’t if she learns who he really is.

Then there’s the spy stuff, which Jack has to learn on the job. He’s a quick study, but his opponents sometimes outwit him, and he has several narrow escapes. His social gifts and ability to speak nine languages let him assume false identities with relative ease. But he also feels out of his depth, which makes him human, a refreshingly anti-James Bond. Like the prototypical spy, Jack trots the world, from China to San Francisco to New York and beyond, but Downing’s grasp of history keeps the travel suitably difficult and the connections unreliable.

A few critics have taken the author to task, saying that he should concentrate on Jack’s on-the-job training and damp down the history. Fie, say I, and not just because I’m a historian of that era and love that stuff. Jack and Caitlin read newspapers avidly because they care deeply about politics, also the hub of their respective professions. I never felt as if they were batting headlines back and forth to dump information on the reader or paint a backdrop.

As for historical accuracy, it’s impressive, especially considering the wealth of detail. The narrative does suggest that conscription existed in Britain then, which isn’t true (not until 1916), and Jack’s surveillance of a German agent in New York would have been hampered by having to crank his Model T to start the engine.

But these nits are worth mentioning only because of discussions I’ve seen recently in the blogosphere that even one petty detail got wrong can ruin a book. Really? There isn’t a historian writing today who doesn’t accept the chances of error, so why should novelists be held to a higher standard? Imagination trumps pedantry, any day.

Sorry for my digression. Read Jack of Spies. You won’t be disappointed.