One horrific night in January 1941, police and paramilitaries in Bucharest drag thousands of Jews from their homes and murder them. A young couple, fearing the worst, abandons their not-quite-four-year-old daughter in hope that someone will take her in. Someone does; and through great good fortune and personal connections, a childless couple, Anton and Despina Goza, adopt her and name her Natalia. Even better, adoptive parents and child make a practically seamless fit, and, for better and worse, Natalia remembers no other life, no other family.

Luckier yet, the Gozas have a happy home, despite wartime shortages, bombing raids, and the German presence that comes with being a Nazi satellite. Anton has a successful stationery business, built by hard work and an abundant reservoir of personal warmth, and the Gozas want for very little. Natalia even has a piano to play, at which she seems a young virtuoso. Ironically, the real troubles begin after the war’s end, when the Soviets come to Romania. Stalin’s men intend to root out “bourgeois counterrevolutionaries,” as in anyone who’s got two pennies to rub together. That puts the Gozas in the crosshairs. 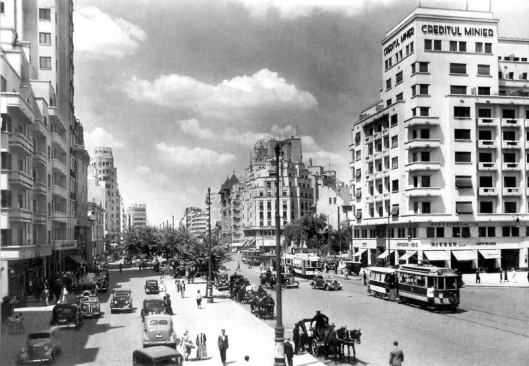 How this drama plays out is the greatest strength of The Girl They Left Behind. Veletzos excels at scenes revealing the nitty-gritty of Soviet rule — the uniformed thugs who “inspect” private homes for signs of wealth; the joyless, muzzled schoolroom; the several families packed into one apartment, with a Party informer in their midst. Natalia’s past, though not unique in Holocaust literature, packs a punch too, and the reckoning you know is coming hangs over the narrative like a storm cloud.

Unfortunately, I think Veletzos could have allowed a full-fledged hurricane and derived even more power from it. One wind that never even gets a chance to blow concerns Natalia’s reaction to her private discovery (which happens in very contrived fashion) that she’s adopted. Though surprised, she shuts the news from her mind, which seems rather nonchalant, especially for a teenager, who’d likely be trying to figure out who she is. She never asks herself (or anyone else) who the fugitives might have been, though she knows the date of her abandonment and could have put two and two together. It’s as though Veletzos, having evoked the Holocaust, wishes to leave that behind, like the girl.

Later, when Natalia understands the complete story, she still fails to plumb that aspect of herself. But even without reflecting on her Jewish heritage, she’d surely imagine who her birth parents might have been, why they fled, and what sort of blood runs in her veins. She might also ask why her adoptive parents never told her. But Natalia never holds onto criticism of them, only about others.

Then again, the narrative idealizes Anton and Despina. Consider this first description of him:

Despina could not help thinking that he looked handsome in his striped silk pajamas, even at this early hour, his short-cropped hair rumpled, the faint smell of last night’s whiskey still on his breath. He began brushing his teeth, humming a tune to himself. Sometimes his boundless optimism rattled her a little, but it was part of his charm. And her husband was certainly a man blessed with undeniable charm.… It wasn’t just her on whom Anton had this effect but practically everyone who knew him. His lightness of being was infectious, irresistible. Women turned their heads as he passed them on the street, looking like Cary Grant in his suits tailored to perfection, a white angora scarf draped over his broad shoulders…

Sounds like someone I’d like to meet, yet surely Anton would show a blemish once in a while, especially given the stress of war and two foreign occupations. Despina’s messier, but in a clumsy way, toward mania — first, as a woman desperate for a child, and then as a fiercely protective, almost lunatic, mother. Why does such intense maternal love in fiction so often require screaming fits or cold, manipulative silences? Grief and passion feel more authentic when they’re not histrionic. What’s more, the portrayal strikes me as antifeminist, as though we can only understand such an overwhelming attachment through hysteria. M. L. Stedman made the same mistake in her otherwise excellent novel, The Light between Oceans, so I don’t mean to single Veletzos out. In both cases, though, I think a flaw other than craziness would have served better.

If The Girl They Left Behind sometimes seems predictable, that’s partly a function of the story, which sets up certain expectations and delivers too reliably, and partly because of characters who react the way they have before. That’s why I like the scenes you can’t anticipate, like those describing Soviet rule; and since I knew very little about Romania before I read the novel, I drank all that in. What could have been a powerful, unforgettable story fails to rise above the poignant, but for some readers, that will be enough.