It’s May 1753, and Tabitha De Vallory (née Hart) has every reason to rejoice. A former prostitute turned lady of the manor, Tabitha has found married happiness with Nat, onetime rake and scribbler of scurrilous, lurid tales, now declared heir to a Cheshire estate and the baronetcy that goes with it. Come summer, Tabitha will give birth to their first child.

But when the body of a pregnant seventeen-year-old girl, likely a prostitute, is found beneath the Mandrem Oak, an ancient tree on Nat’s land said to have magical powers, Tabitha sets out to find the killer. Her pregnancy hampers her, not least because Dr. Caldwell insists she remain in bed and refrain from any thought or activity upsetting to her weak feminine constitution. Tabitha wishes she could tell him to stuff it, but despite her natural boldness, she must placate Nat, who fears for her; the servants dedicated to treating her like a human wheelbarrow; and—a nice touch—her own fears and folk beliefs.

Further complicating matters, a charismatic preacher, Baptist Gunn, has gathered a band of believers near the Mondrem Oak. He prophesies a savior to be born that summer and a kingdom free of such annoyances as private property, privileges of birth, or the confines of marriage, all to be found in His Majesty’s colony of Pennsylvania. His followers put their faith in Gunn and the New World he describes, largely turning a blind eye to his habit of lifting every skirt he can get his hands on.

The Prophet is the sequel to The Almanack, and readers of that mystery will find welcome parallels here. As characters with disreputable pasts, Tabitha and Nat must tend their reputations, and the course of their true love travels a bumpy road. I like the hurdles Bailey places in their way, particularly important because Nat, as acting lord of the manor and responsible for catching the murderer, has the physical and moral freedom Tabitha lacks, whereas what secrets he chooses to share (or not) affect domestic bliss.

Readers of the previous tale will also recognize the feminist slant. Nobody understands the sexual double standard better than Tabitha, but, in a further twist, she has to train herself to reach Nat emotionally rather than rely on physical attraction alone. Meanwhile, she suffers the neighbors’ snobbery, endures passes from any man who thinks he can get away with it, and hates being on public display as a child-bearing member of the gentry, rather like a monument about which everyone offers an opinion. The sawbones, whom she heartily dislikes yet also fears, just in case his medical opinions are correct, represents only part of her trials:

Doctor Caldwell was a shambling man of five and thirty; unkempt in his person, with a greasy old cauliflower wig, and the protruding eyes of an overbred pug dog. According to Nat he was an excellent physician, but his manner left Tabitha feeling like a brood mare being assessed for market. First, he inspected her urine in a glass, holding it to the light, then sniffing it, and—rather disgustingly—tasting a few drops on the ends of his fingers. . . . Close up, she was forced to turn her nose from great wafts of his onion breath.

Finally, The Prophet enacts the fascination with folklore that drove The Almanack, and I find that the most appealing part of the current tale. Through Baptist Gunn and his cult followers, and the mysteries and folklore of childbearing and fortune telling, Bailey offers a fine glimpse of everyday Cheshire life. I like how she captures the outlook of people who pretend to be modern but aren’t, nor do they know what modern means, except that it scares them. Nowhere is that more evident than in time keeping, in which a society largely without clocks or authoritative calendars can’t be sure what day it is—especially because the country has just changed systems. That uncertainty affects the story.

However, I find the storytelling and writing less compelling than those of the previous installment. Here, the villains are 100 percent villainous, Gunn’s 100 percent corrupt, and the mystery, 95 percent predictable, the remaining 5 percent accounting for minor detail. As for narrative style, I prefer stories in which authors show rather than tell, particularly when it comes to their characters’ emotions. The Prophet, for all its welcome marital complications between Nat and Tabitha, often resolves them through explanation, or so it seems. I notice many physical descriptions that feel static rather than active, a surefire measure of tell versus show.

I wish I could recommend The Prophet more highly. I hope that future installments reclaim the pleasures of its predecessor.

In midsummer 1752, Londoner Tabitha Hart accepts a rendezvous at an inn with a well-to-do gentleman who promises to be an easy mark, only to waken and realize she’s the one fleeced. The loss of her money, jewels, and clothes proves more than a usual setback in the sex-and-petty-theft trade, for Tabitha was planning to bring her mother funds she desperately needs, for herself and the care of Tabitha’s out-of-wedlock daughter, Bess. Worse, when the destitute, half-dressed Tabitha reaches her mother’s cottage in the village of Netherslea, to her shock, her mother’s recent letters pleading for help prove all too prophetic. Mrs. Hart has drowned in the river, a death her daughter refuses to credit, especially given the constable’s explanation, that the old lady’s mind had grown infirm, and she didn’t know where she was going half the time.

Consequently, much as Tabitha longs to return to London, she must restore her mother’s reputation — there are whispers of suicide — and see justice done. Her only clue is her mother’s almanack, in which appear warnings about a certain D, said to be untrustworthy and dangerous. However, Tabitha has few illusions about remaining in her native village, where her reputation is mud, and the sanctimonious, vindictive Parson Dilks would like nothing better than to drive her away. He applies pressure to take the cottage away, because it was granted to her mother as the village “searcher,” the one who laid out dead bodies, inspected them for cause of death, and wrote the results in parish records. Through the intercession of more kindly souls, Tabitha is allowed to inherit her mother’s position, and therefore the cottage, but only temporarily, and Dilks finds other ways to persecute her. 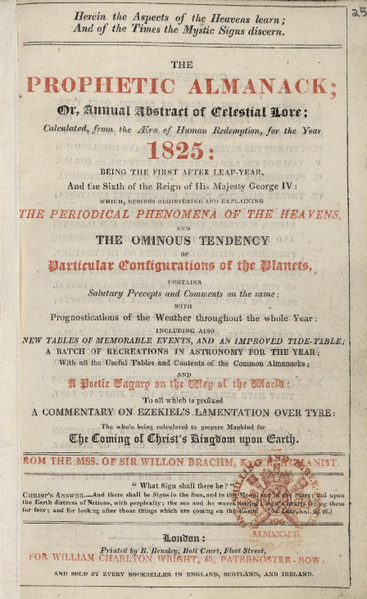 A book of incantations, 1825, from the library of John Harries (d. 1839), a Welsh astrologer and medical practitioner (courtesy National Library of Wales, via Wikimedia Commons; public domain)

Complicating the picture is Nat Starling, a swaggering lush who scratches out a living writing scurrilous stories about true crime and debauchery. Naturally, he falls for Tabitha’s beauty and intelligence right away, whereas he’s just the sort of man who has always been poison to her, which is why she feels drawn to him as well. But she won’t give him what he wants unless and until he helps her solve the mystery about her mother, which he seems to wish to do anyway, having been a friend of hers. But, as with everyone else in Netherslea, Tabitha can’t be sure of Nat, and his dissolute habits raise further doubts.

The Almanack offers a clever mystery, with twists and turns (and “no — and furthermore”) aplenty. Bailey’s a fine storyteller, but she’s done more than build a clockwork plot that keeps striking an odd hour, serving to heighten the tension. Rather, she’s re-created the lore of village life, with its superstitions, back-biting, and feast of gossip. She’s also paid due tribute to feminism, as Tabitha bitterly resents the double standard that calls her a whore but allows men license to do what they wish, further granting them credibility as witnesses that she can never hope to earn.

This intricate homespun tapestry begins with active description, as with Tabitha’s first glimpse of Netherslea on her return:

The riverside path was deserted that morning; from the golden motes in the air, she guessed most folk must be hay-making. Crossing a well-remembered meadow, she drank at an icy brook and breakfasted on bilberries fresh from the earth; the taste of them, tartly sweet, was fresher than any food she had eaten in years. Thereafter her way grew easy and she passed the succeeding miles serenely. She had forgotten the lushness of the Cheshire sward in midsummer; the murmur of insects on the wing, the wildflowers that bedizened her path. Idly she picked meadowsweet, wild rose and ragged robin, twining them into a chain and then winding it in a circlet through her hair.

Bailey takes her carefully delineated ambience one step further. Having researched the eighteenth-century passion for almanacks, which were recycled predictions published yearly and simply plugged into different dates, she makes excellent use of them here. Not only does the infamous D deliver on the ghoulish prognostications in the local almanack, Bailey introduces each of her short chapters with riddles in verse, which contemporary almanacks contained, and which were devoured avidly. The fifty riddles Bailey has chosen — most anonymous, but a few credited to Jonathan Swift, among other notables — predict some aspect of the episode to come. Since the mystery itself is a riddle, and solved through one, everything connects. And that’s part of the delight in The Almanack, which, despite an occasional cliché of character, makes a satisfying tale.