It’s a commonplace that the victors write the history. The disastrous Narváez expedition to what the Spanish called La Florida, from which only four men returned after an eight-year odyssey, earned celebrity in the early sixteenth century as a heroic mission to civilize the New World savages. But Lalami’s retelling gives Mustafa ibn Muhammad ibn Abdussalam al-Zamori, a Moorish slave who accompanies the mission, the voice he never had. The official record mentions him in a phrase, but only by his Spanish name, Estebanico. Here, he has plenty to say, even if he has to swallow most of it in Spanish company, and what a penetrating, profound, and empathic narrator he is. As he remarks of his upbringing, “Silence taught me to observe. Silence made me invisible to those who speak.” That skill both serves him well and saves his life on more than one occasion.

In the early 1520s, Mustafa, once a successful merchant in Azuremma, Morocco, sells himself into slavery to provide money for his mother, brothers, and sister. The hard times have followed European conquest, but, as with everything else in Lalami’s astute vision, there’s always more to say. At one level, how Mustafa comes to his fateful decision, and what happens after his master resells him in 1527 to a captain participating in the Narváez expedition, makes a page-turning adventure of great pathos. But in the process, Lalami also shows what slavery, greed, and colonialism look like, and how much farther they reach than it at first appears. 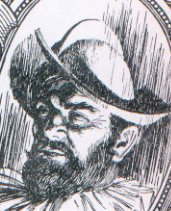 Exhibit A is of course the Spanish conquerors, especially Narváez, a selfish, proud, pig-headed leader who makes terrible decisions that he then tries to spin. (Politics doesn’t change, even if the politicians do.) However, his captains are little better, and their collective fixation on gold brings about catastrophe, for themselves and the native peoples unlucky enough to live in their path. Among the possessions the Spanish steal, Estebanico notices, are place names, as if their identity has somehow changed at Spanish whim, as accurate and pithy a description of colonialism as there is. And as he notes, his masters have stolen his identity as well, which makes him determined to cling to his real self, at least in his own head, where they can’t touch him.

But in a brilliant stroke, Lalami turns the tables: His real self has committed the same sins as the Spanish, if on a smaller scale. He recognizes, for example, that greed caused his own downfall as a merchant, that he sold others into slavery for quick profit, and that his ancestors conquered Azuremma and colonized it. Further, he comes to understand that his efforts to stay alive and return home–the dream that keeps him going–may bring unseen consequences to others. Late in the novel, he laments, “Would I ever be able to stir a finger without bringing harm to somebody?”

It’s this voice of conscience, delivered firmly but without breast-beating, that makes The Moor’s Account so penetrating. Not only does trying to do the right thing–or even figuring out what the right thing is–up the tension, the humility that Mustafa strives for forces me to consider my own life more carefully.

I often lamented the wicked turns my life had taken, but I rarely considered how much I had to be thankful for, how I had survived so long where so many others had perished, how I had seen wonders that no other Zamori [native of Azuremma] had. Had even Ibn Battuta [a famed traveler and chronicler] witnessed the things, both terrible and wondrous, that I had seen?

Read The Moor’s Account. Maybe you too will be moved to reflect.