This week, Novelhistorian turns four, which means I’ve reviewed more than two hundred books. As many of you know, each year I write a post in which I mention, in thumbnail, those that have made the deepest impression on me–or, to put it another way, those I expect I’ll still remember after another fifty-odd books have passed through my hands. This year, I’ve chosen eleven, as follows:

Nicole Lundrigan conveys the hatreds, will to vengeance, and oppression that mark Tito’s postwar Yugoslavia in The Widow Tree, told through the eyes of three teenagers. Her tense, moving narrative shows that for war’s survivors, trust is the first casualty.

The Infidel Stain follows the two amateur detectives M. J. Carter introduced in Strangler Vine, this time in 1840s England, as they unravel the mysteries behind murders committed in a politically charged atmosphere. Carter’s prose and characterizations are first-rate, and she re-creates the upheaval of the Hungry Forties with breathtaking vividness.

Paris Spring, James Naughtie’s excellent thriller about the Paris student uprising of 1968, echoes John Le Carré in its elegant plot with few moving parts, focus on motive, and characters who believe in what they’re doing. It may resolve too neatly, but Naughtie knows his ground, especially the brethren of spydom.

Eleanor Catton tells a Victorian-style epic mystery in The Luminaries, about gold-rush greed, deception, and loyalty in 1860s New Zealand. Where many authors struggle to intersect two disparate lives without resorting to contrivance, Catton seamlessly weaves more than a dozen threads. Skip the astrological charts she includes and dive in.

In The Fifth Servant, Kenneth Wishnia renders a remarkably imaginative mystery, set in sixteenth-century Prague. The Christian community claims that a girl has been murdered so that the Jews can use her blood to make Passover matzo–the old blood-libel myth–and a rabbinical student attempts to solve the case by using his knowledge of the Talmud.

With Mrs. Osmond, John Banville pens the unthinkable, a sequel to Henry James’s Portrait of a Lady, down to the loop-the-loop sentences that invariably arrive at truth and the intense feelings rendered in a gesture, a glance. But it’s far more than imitation James, which you need not have read to appreciate this novel; Banville underlines the heroine’s masochism, which, he argues, amounts to vanity, an unusual, striking perception.

There are grittier mysteries out there than The Inheritance, but Charles Finch’s warm-blooded Victorian detective, Lenox, is an exceptionally clever sleuth, and the understanding of human nature and the kindness and generosity that suffuse the writing make this novel stand out. Not only will you be entertained, you’ll learn tidbits of information that Finch likes to throw in–for instance, why the British drive on the left.

It’s not kindness or generosity that mark The Moment Before Drowning, James Brydon’s tale that blends colonial war in 1950s Algeria with a grisly murder in Brittany, but it’s a terrific story, and I guarantee it will grip you and make you think. Brydon juxtaposes the two narratives to ask what purposes the law and its enforcement actually serve. Be warned about the torture scenes, but nothing is gratuitous or sensational.

The Wanderers, Tim Pears’s gorgeous, subtle novel, tells a heart-breaking story about two teenagers’ suffering and longing, set in Devon around 1912. She’s the daughter of the manor; he’s the servant’s son exiled from the estate. Pears leaves questions hanging, which will bother some readers, but his prose and characterizations are flawless, and the tension never lags in this simplest of plots.

Another novel I admire for elegant simplicity is The Anchoress, Robyn Cadwallader’s superb tale about Sarah, an English girl in 1255 who chooses to be a religious hermit at age seventeen. Why she does so, and how her choice changes many lives, not just her own, makes a remarkably complex story, so beautifully and truthfully rendered that you have to remind yourself it’s a first novel.

Last on my list, but only because I reviewed it most recently, is The Mercy Seat, Elizabeth H. Winthrop’s elegiac tale about Louisiana justice in 1943. Nine voices recount the hours before the scheduled execution of Willie Jones, an African-American teenager convicted of rape, and how the verdict has fractured the town. Winthrop manages to recount this heart-rending, provocative story in brief, staccato chapters that form an eloquently coherent whole, pure sorcery that will haunt you.

Those are my eleven favorites. I’ve enjoyed writing my reviews this year and hope you’ve liked reading them.

In this marvelous, heartfelt novel set in the Yugoslavia of 1953, oppression comes in many forms. It’s not just that Tito’s long arm reaches from the capital all the way down to the village of Bregalnica. The villagers have seen the great leader only once, when his limousine drove through; on that occasion, he pulled on white gloves before shaking a few hands, hiding his face behind sunglasses. 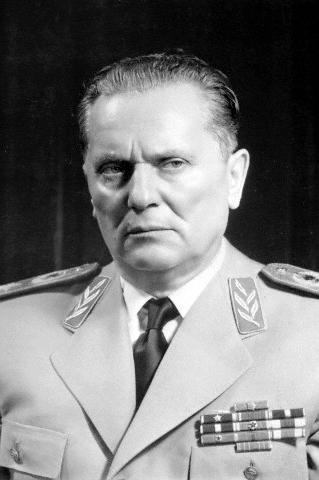 Josip Broz, known as Tito, in 1961 (courtesy Digital Library of Slovenia, via Wikimedia Commons. Public domain in Slovenia and the United States).

That moment says much about the world of The Widow Tree, but the local is more immediate and pervasive. The Second World War may be over, but residual anger, hatred, and the urge for vengeance simmer close to the surface, and whoever challenges tribal loyalties does so at their peril. No one has forgotten anything, least of all old scores.

So it is when János, Dorján, and Nevena, teenagers whose school has been assigned a government field to harvest, dig up a shard of pottery containing ancient Roman coins, their find tests their allegiances. Nevena, whose father is the Komandant in Bregalnica, thinks they should hand over the treasure. János violently disagrees, insisting that they should keep it and tell no one. Dorján sees both sides. And in the end, because János is the most passionate and daring of the three, they decide to keep the coins; the boys bury them in the woods. Naturally, nothing good comes of this.

Lundrigan’s saying that it’s the kids who suffer most, growing up carrying inherited burdens, and the way she’s drawn her youthful triumvirate underlines the point. János and Dorján, friends practically from birth, both live with their grandmothers (their parents having been casualties of war or illness) and have long dreamed of becoming engineers and rebuilding their country. But János, who has a cruel streak, has always been a daredevil and a prankster; by the time he’s sixteen, he’s sensed that, contrary to what everyone says, betrayals destroyed his family.

Accordingly, he’s primed to rebel, and his anger is such that he won’t be silent. Dorján, of kinder nature but less confident socially, tries to tell his friend that expressing discontent will bring punishment, though he’s also worried that János is pulling away from him and has renounced their shared dream. The growing attraction between János and Nevena threatens to divide the friends even further, but, ever self-effacing, Dorján never opens his mouth to object. He sympathizes with his free-thinking friend, even shares his ideas, but is too scared to do anything about it. János is disgusted with him, but Dorján knows his limits; he’s the type whom authority figures pick on, sensing weakness.

As for Nevena, she’s in a difficult position. She admires and respects both boys, but she’s also the Komandant’s daughter, and she wants to be a good girl. Being female, she has fewer options than her friends–as in only one, marrying well–but Lundrigan complicates the picture. She makes the Komandant a doting father who intervenes to protect Nevena from her mother’s authoritarian small-mindedness. Consequently, Nevena may be forgiven for imagining that he’d be equally kind and sympathetic to everyone else.

But in Bregalnica, tender qualities are very carefully guarded. János’s grandmother, Gitta, understands how this appears every day:

To cut the silence, she flicked on the radio, heard the stream of good news. Always good news. Stories that would make a person feel better, if only they allowed them to penetrate their hearts. Gitta could not abide it, twisting the dial with a harsh snap of her wrist. That is not real. That is not real. But to whom could she complain? No one was left untouched, and no one even talked about the war anymore. They ignored the homes that were filled with new families. Forgot about the faces that were missing, or failed to notice the pale outline where shop signs had been removed and hastily replaced.

My sole criticism of The Widow Tree has to do with Dragan Dobrica, Nevena’s father. His desire to appear firm yet merciful, capable of kindness, conceals a vengeful spirit. I like that portrayal, but I’m not entirely persuaded by Lundrigan’s representation of Dragan to himself; I think he should have more difficulty, or spend more time at, negotiating between his benign and malignant selves.

Otherwise, The Widow Tree is a terrific novel, testament to the truth that for war’s survivors, the greatest casualty is trust.