Thomas Grey, late of the Royal Marines and His Majesty’s Secret Service, intends to sail to Boston and take a job with a lumber merchant. The year is 1803, the Napoleonic Wars have reached a respite, and Grey wishes to seize his chance to get out while he can. Having lost his beloved wife to a French raid on the merchantman on which the Greys were traveling, he’ll to the war no more.

Ah, but not so fast. A privateer attacks the ship on which he’s bound across the Atlantic, and news comes that Napoleon has revoked the Treaty of Amiens, resuming the war against Britain. Grey, with much derring-do, helps repel the attack, but the damaged ship must make landfall in neutral Portugal for refitting. While he’s there, circumstances hand him a great opportunity to pretend to switch sides and dupe French intelligence with disinformation. Rest assured that our hero’s game of double agent will lead him into many tight situations, as he must penetrate the inner sanctum of French military power. 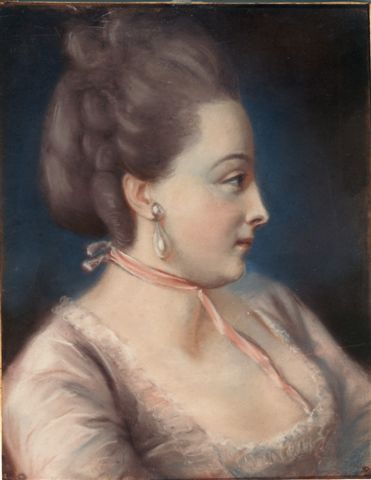 Michelle de Bonneuil (1748-1829), rendered here in pastel by Rosalie Filleul, ca. 1778, was celebrated for her beauty, charm, and artistic ability–and acted as a spy for the French Revolutionary government and Napoleon (unknown provenance, via Wikimedia Commons; public domain)

If you’re thinking that Hold Fast sounds like Patrick O’Brian’s seafaring novels of the Napoleonic era meeting Ian Fleming’s James Bond, you’ve nailed it, and the author intends as much. In his afterword, Gelernter confirms himself an admirer of both. For reasons I’ll get to a little later, I wish he’d hewn more to O’Brian than Fleming, but as a fast-paced adventure story, Hold Fast has its charms.

First and foremost, the narrative moves like lightning, with “no—and furthermore” lurking in every nook and cranny, to say nothing of dark alleys and rooms in which two’s company and three’s a crowd—especially when the uninvited third holds a weapon. Secondly, Gelernter has a lot of fun turning Grey into a nineteenth-century Bond, equally at home at a gaming table, vineyard tasting room, or hand-to-hand combat. The in-joke will raise a chuckle, here and there; Hold Fast can be pleasingly clever, that way.

It was only the sound of seamen holystoning the Ruby’s deck that pulled him back to the present, reminded him where he was—it was that scrape-scrape, scrape-scrape of men on their knees scouring the ship with sandstone chunks the size and shape of Bibles. Grey couldn’t help but notice that the pace of the scraping was considerably slower than it was, invariably, in the navy. On this ship there was no bosun to start the men with a kick in the pants. Nevertheless, the ship was impeccably clean. Perhaps there was a lesson in that.

As this passage implies, Grey, though a naval intelligence man through and through, rejects the brutal Royal Navy discipline, so a wisp of democrat exists beneath the surface of a warrior for king and country. It’s a wrinkle, unfortunately one of few, and the others don’t appeal me—he’s a prig, vengeful, cold, with a moral code stereotypical of the stuffed-shirt Englishman. Which raises the question: Is this meant to be funny?

There’s a scene in which a young woman points a pistol at him. Since she’s neglected to cock it (it’s a flintlock, naturally), Grey has no trouble subduing her. He cracks her on the side of the head—gently, mind you—deftly grasps her body before it falls, and deposits her in a chair. Should we laugh?

Such humor, if that’s what it is, sits oddly, though, and not just because a lot of bodies fall. Lacking the tongue-in-cheek bravura of the George Macdonald Fraser’s Flashman novels, Hold Fast conversely fails to treat the serious subject matter with depth or empathy. Grey’s flatness, though it may provoke a smile, as in the above scene, renders him an automaton, and priggishness never did much for anyone, especially without a sidekick with whom to contrast. As a shallow, even dislikable character, then, Grey offers little to bond with, if you will. This is where the narrative misses anything remotely akin to the O’Brian gift for character and relationships.

I read Hold Fast mildly curious to know how Grey would foil the threats against him. But if I’d stopped reading halfway through, I wouldn’t have felt cheated, because I didn’t find him compelling. Moreover, you can guess how he’ll proceed, relying on his preternatural aptitude for close-quarters combat, which no one else ever seems to match.

Consequently, the character in the novel lacks depth, and the character of the novel comes down mostly to cleverness. That has its points occasionally; my favorite bits concern intriguing sidelights on gambling or the making of champagne. But if these are the most interesting aspects of Hold Fast, I can’t say I’m held.

It’s 1966, and Frances (Frankie) Croy has fled to Venice to hide. More than a decade has passed since her debut novel captured the London literary world, during which she’s published a string of failures. A particularly cutting review of her work has cast her writing style as a dinosaur whose long-deserved extinction can’t happen soon enough. A hypersensitive loner, Frankie has let that review get under her skin, believing — with some reason — that her editor shares the negative opinion.

At a publicity gathering for someone else, Frankie erupts violently, having misinterpreted postures and expressions around her as slights. The London tabloids eat this up, and Frankie just manages to avoid legal trouble. After a brief stay in a psychiatric hospital that does her no good and only spawns further gossip columns, she’s taken flight to Venice, where friends loan her a palazzo, known as the Palace of the Drowned. 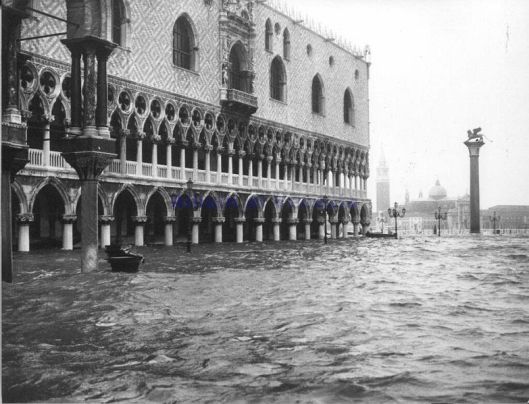 As you may have guessed, Frankie is quite the paranoid. But this novel operates under the old adage that just because you’re paranoid doesn’t mean nobody’s after you. And much to her consternation, shortly after her arrival in Venice, a woman much younger than she accosts her, says they’ve met before, and declares herself an admirer of Frankie’s work, especially that debut novel.

Frankie’s certain she’s never met “the girl,” as she thinks of Gilly Larson (though she understands that descriptive is fast becoming déclassé) and wonders what her game is. Gilly fastens herself to Frankie like a leech, offering literary opinions she can’t seem to keep to herself, and which would appear to criticize Frankie’s work, except for that debut novel. To rephrase the adage: Just because a leech professes to like you doesn’t mean she won’t suck your blood.

So the game’s afoot, and a clever, well-crafted game it is. It’s not that Palace of the Drowned proposes a cat-and-mouse relationship between Frankie and Gilly. Rather, Frankie wonders whether that’s what they’ve got, or if she’s reading malign intent into innocent, if strange, behavior. Frankie goes back and forth, at times suspicious, at times grateful for Gilly’s companionship and generosity, from which she learns about the city she detested at first sight but has come to appreciate.

I like how Mangan taps into the pervasive fear belonging to people insecure in their accomplishments, especially when a seemingly more confident youngster comes along. I also like the way the narrative depicts an author fiercely anxious about her creative powers who fears she has only one thing to say and said it years ago. You don’t have to be a writer — or any form of artist — to put yourself in Frankie’s place.

That’s what saves the novel for me. The first hundred pages feel like a chore, because none of the characters appeal to me. Mangan has chosen to enact her tale with a brittle, difficult, even obnoxious cast. Frankie seems to care about no one but herself, and I don’t get why she instinctively pushes people away. Gilly’s self-righteous, intrusive, and controlling, too interested in what other people think of her to see them for themselves. Frankie’s friends, the ones who loan her the palazzo, strike poses I find tiresome, while her editor gives publishing a bad name (and makes a couple implausible moves).

Mangan’s assemblage does offer ample opportunity for conflict, therefore creating “no — and furthermore,” the essence of any thriller. She need not strain for plot points, because much of the story comes from within, and credibly so. You also don’t get too cozy with anyone, so you can readily believe them capable of just about anything. But if you’re like me, you cease to care, and only when Frankie’s vulnerabilities feel at all human, rather than merely repellent, do I latch on.

Palace of the Drowned is a literary thriller, and the prose does a fine job creating character and mood:

Before Venice, Frankie had never seen fog so thick.… Here, it rolled in discernible waves, curled around her ankles, so that she could feel it, engulfing her. The Venetian fog seemed capable of obscuring everything — and she had found a peculiar type of comfort in it, in being wrapped up, swaddled, and feeling as though a cloak of invisibility had been draped around her shoulders. It wasn’t just her sight that became affected — sound became muffled as well. Shapes no longer appeared rooted to anything.

Whether Palace of the Drowned will please you probably depends on your tolerance for its characters. Mangan’s a gifted author, and her psychological portrayals ring true. Yet this book is too cold for me to embrace.

Disclaimer: I obtained my reading copy of this book through my work for Historical Novels Review, where this post appeared in different form.