The year is 1907; the place, London. Picture a romance between Lilia Brooke, anticlerical, militant suffragist who believes in “free union” rather than marriage, and Paul Harris, an Anglican canon, and you have the premise of Impossible Saints. What’s more, Paul hates even the idea of a “free union,” because his mother left his father to live with another man. Finally, as a young cleric on a rapid rise, he’d do well to steer clear of Lilia for the sake of his career prospects.

More than four decades ago, I first read George Dangerfield’s classic history of the Edwardian era, The Strange Death of Liberal England, which I highly recommend. I can still recall the hair-raising chapters about Emmeline Pankhurst, arguably the most famous (if not the most influential) suffragist in the English-speaking world, and her daughter, Christabel, both of whom took a great deal of physical and verbal abuse for the cause. (Another daughter, Sylvia, was also involved in the movement.) Lilia Brooke, though fictional, is cut from their cloth, a woman who feels that eloquent speeches and pamphlets aren’t enough, though she excels at both. Rather, she must take her cause to the streets in ways that can’t be ignored, and, like any honest militant, she leads from out front. Consequently, Paul and Lilia have decisions to make. 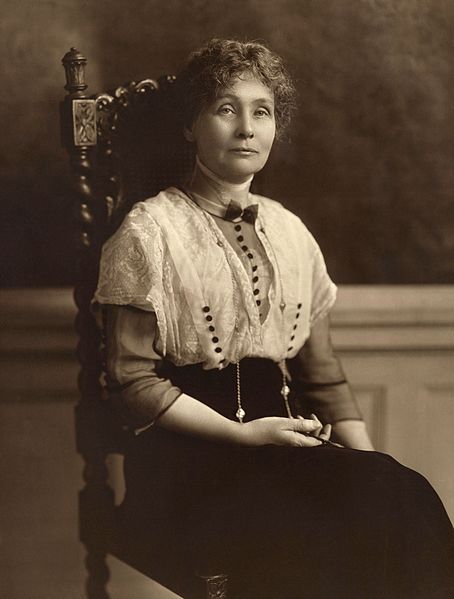 I was delighted to find Harwood’s novel and surprised that it’s the first I’ve ever heard of to portray the suffrage movement in that time and place. I like honest political romances, by which I mean those where both partners are committed, body and soul, to their beliefs, rather than stories in which philosophical differences provide a handy device to keep the lovers apart for a while. I further applaud Harwood’s passion for the era and her understanding and love for the ideas that shaped it. In our politically fractious age, it’s thought-provoking to read about lovers whose undeniable attraction risks foundering on divergent beliefs about morality and justice.

But I wish that Impossible Saints offered a more vivid, nuanced, less predictable narrative. Told almost entirely through dialogue, a choice that demands authorial skill and the reader’s patience, the novel feels like a tract or a running debate.

The discussions have their moments, as when Lilia gently skewers a wealthy businessman and professed Darwinist by asking whether he should hire more women just to see whether they are better fitted to the work than men. More usually, however, speech and thought seem too intellectual, even for the main characters, whose scholarly pursuits led to their initial attraction. Take this passage, for example, where Paul visits a “penitentiary,” a place that purportedly exists to rehabilitate “fallen women”:

Paul had entertained two incompatible expectations of these women — the romantic, sorrowful, lovely unfortunates of Pre-Raphaelite paintings on the one hand, and the gaudy, brash, painted courtesans of legend on the other. Neither expectation was realized. What surprised Paul most was how ordinary and young Mary looked. She couldn’t have been older than seventeen, yet her face was sober and intelligent, reminding him of his father’s upper servants. Was this one of the wicked, abandoned creatures that many of his colleagues spoke out against from the pulpit?

I have no doubt that Harwood’s observations here are dead on, and I believe implicitly that Paul has never considered a woman like this for who she is. But I don’t think he’s really seeing her now, either, for the description feels pigeonholed, generic, even academic, and since it’s a key moment, his reaction should be visceral. I get that he doesn’t reveal his feelings to others, though they run deep, but aside from described internal states, they’re hard to find. As such, I feel sympathy and interest in viewpoints and where those will lead, but am less compelled by the characters who hold them.

There’s little or no external vividness, either. Emmeline Pankhurst, who surely deserves at least a line of physical description, receives none (and neither Christabel nor Sylvia is even mentioned). Impossible Saints has little grounding in any particular place, and neither London nor the early twentieth century comes alive in its pages.

Artless is the word that comes to mind about this novel, in its simplicity, which can be charming, but also in its lack of subtlety or surprise. With apologies to Paul’s profession, so much of this book feels ordained; when anything appears the least out of the ordinary, you can bet it will work its effects in the next chapter or so, and you can guess what they’ll be. Conversations feel direct, to the point, and resolved, and though occasional misunderstandings arise, people seldom, if ever, interrupt or talk past each other.

Impossible Saints is a novel about ideas, less so the people who hold them. And though those ideas are powerful and timely, the narrative never quite takes flight.