I don’t know why or how I avoided reading this novel, the first in a famous series about the Royal Navy during the Napoleonic Wars, but as a recent convert, I advise you to hie yourself thither. Master and Commander is no ordinary sea story, even if you think one cannonade is much like another, or that you’ve heard all you care to about wooden ships and iron men. 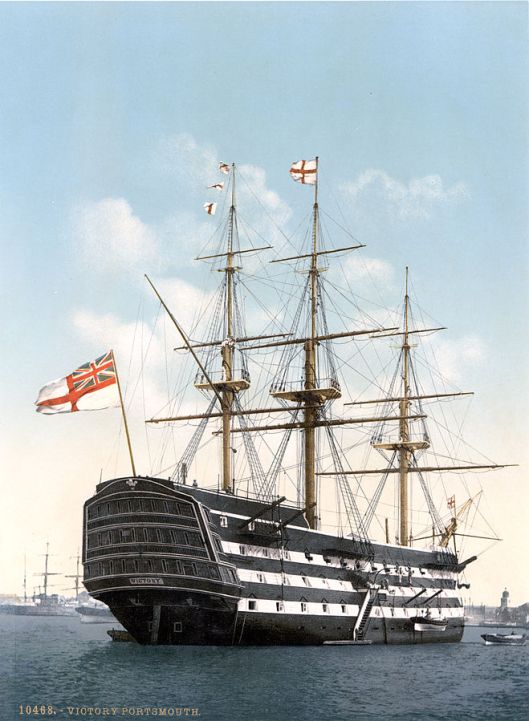 HMS Victory, the most famous British ship of the Napoleonic Wars, if not in all of history (Courtesy Wikimedia Commons).

Rather, O’Brian takes the genre giant steps beyond its normal limits. There’s nothing he doesn’t know about sailing ships, how they functioned, or life (and death) at sea, yet the narrative wears this information lightly. Moreover, he has an extremely perceptive eye for character and mood, revealing the inner lives of the main cast, certainly, and even glimpses of what the minor players dream about, portrayed in vivid, easily flowing prose. I wish he’d given more depth to the two women who appear most frequently; they’re little more than ambitious sex objects. Nevertheless, it’s pretty clear that O’Brian is master and commander of both the English language and psychological observation.

The premise is deceptively simple. Jack Aubrey, a Navy rat in his late twenties, has finally obtained a captaincy over the Sophie, a brig assigned to patrol western Mediterranean waters. His career has suffered severe ups and downs, mostly because he can’t control his feelings about idiotic, narrow-minded superiors who give him idiotic, narrow-minded orders. Since we’ve all felt that way, we can sympathize, though I suspect that most people would display better judgment than Aubrey, who conducts a more or less open affair with his immediate commander’s wife. On the other hand, Aubrey has a friend or two in high places and his excellent seamanship to recommend him. So he’s given the Sophie, which he sees as his chance at redemption and getting out of debt, for the navy rewards its captains for every enemy ship they bring home as a prize of war.

Just before he’s due to sail, he meets Stephen Maturin, a penurious doctor who shares his love of music, among other interests. The captain persuades his new friend to become the Sophie’s surgeon, a real coup, given that most vessels must put up with half-educated sawbones just as likely to kill their patients as cure them. Further, having lived in the western Mediterranean for years, Maturin’s knowledge of the Spanish coast and its languages make him a valuable asset. But Stephen’s greatest task may be to slip gently inside the captain’s blustery, mercurial exterior and understand his rough edges in ways that nobody else does.

This is where Master and Commander excels. Maturin’s presence as a landlubber curious about everything nautical–and his subtly raised eyebrows at customs and traditions that he thinks make no sense–gives life under sail an extra dimension, a view with which the reader identifies. But it’s not just that O’Brian’s characters move fluidly among every rope, spar, and pulley, employing their names and functions so naturally that they have trouble explaining them to Stephen in terms he can understand. It’s that Aubrey, a very social creature who loves good drink and good conversation, and who has dreamed all his life of being master and commander, realizes that his new rank forever separates him from the shipboard society he craves. Dining with the Sophie’s officers brings this sad truth home:

Everyone was unnaturally well behaved: Jack was to give the tone, as he knew very well–it was expected of him, and it was his privilege. But this kind of deference, this attentive listening to every remark of his, required the words he uttered to be worth the attention they excited–a wearing state of affairs for a man accustomed to ordinary human conversation, with its perpetual interruption, contradiction and plain disregard. Here everything he said was right; and presently his spirits began to sink under the burden.

What perplexes Aubrey most is why he can’t seem to break the ice with James Dillon, his extremely capable lieutenant who holds him in guarded contempt. Stephen understands Dillon better, for they’re both Irish-born and became acquainted during the disastrous Rebellion of 1798. Aubrey’s prejudices against “Papists” touch Maturin less, because he’s Protestant, but he deplores the captain’s careless, disparaging remarks about Catholics and Irish rebels, which, naturally, set Dillon’s teeth on edge.

These touchy relationships add tension, but they also underline a central theme, about social rank, power, and their far-reaching effects. Rank and power can swell to a geyser propelling a man upward or a vortex dragging him down, and managing these equal possibilities requires a keen hand on the wheel, day in and day out. Even men of lower rank and prospects face the same problem. The sailing master, a gifted navigator, curries Aubrey’s favor, partly because he’s sexually attracted to the man the crew nickname Goldilocks–but homosexuality is a hanging offense, so he’s careful to make his fawning look like anyone else’s. Another example is an ordinary seaman who clearly has the gift to advance but fears to progress beyond what he thinks is his natural station. The Sophie is an entire world in a short stretch of timber and canvas.

Disclaimer: My son loaned me his copy of this book, which he read long before I did, a mark of his good taste.