Here’s a nugget I uncovered while researching my forthcoming novel, Lonely Are the Brave.

To soak up the historical background, I read several months’ worth of the Seattle Times from 1919 and learned about a parade in late April welcoming home some four hundred soldiers from Over There.

But it wasn’t just a parade. It was as though a phalanx of hopes, attitudes, prejudices, expectations, and flat-out misconceptions marched through Seattle that day, not just men from the 361st Infantry Regiment, 91st (“Wild West”) Division. And the pride, earnestness, gratitude, awkwardness, and ignorance on display provide a stew of conflict in which my protagonists, a man and a woman, have to swim.

The parade organizers mixed solemnity with “stunts,” a word typically applied then to party games or entertainments. The soldiers, supposedly the stars of the show, made up the rear. Next came white horses drawing a large gold star, to commemorate the fallen. Farther up, young women in white rode the running boards of cars and strewed white flower petals along the route.

Ahead of them walked Elk Lodge brothers dressed in feather headdresses and war paint, while leading the column were police officers wearing chaps who fired off blanks from their pistols. Cowboys and Indians; a Wild West “stunt.” 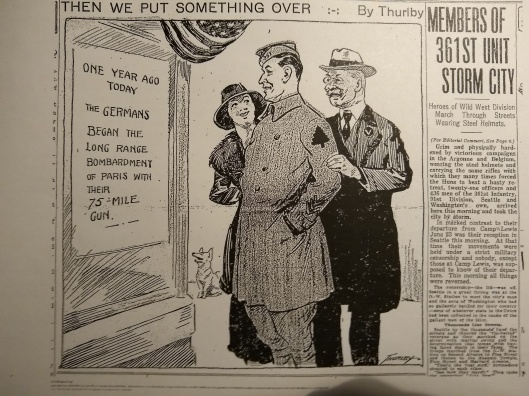 Front page, Seattle Times, April 26, 1919. Note the soldier’s evergreen shoulder patch, emblem of the 91st Division, and the “361” on his cap. Note too the hero-worshiping sister/wife/sweetheart.

I tried beginning my novel with this scene and wound up cutting it. But my male protagonist is a soldier who thinks the hoopla insults his dead friends and wonders what country he’s come home to. That newspaper article was a gold mine.

Review: The Emperor of All Maladies: A Biography of Cancer, by Siddhartha Mukherjee
Scribner, 2010. 592 pp. $18

When I picked up this book, I hadn’t thought to review it. Much of the narrative takes place too recently to qualify as history, as I define it in these pages, and part of that story is Mukherjee’s clinical experience as an oncologist and researcher–memoir, in other words, which I seldom read and never review. But now that I’ve finished The Emperor of All Maladies, I feel more confident about my grasp of a terrifying, necessary subject, information I’ll be glad to have one day. And if you read it, I bet you’ll feel the same way.

I won’t sugarcoat it, though. This book takes you on an agonizing journey, and when you read about cancer’s physical and psychological horrors, you can’t help putting yourself or someone you love in the picture–assuming you haven’t already experienced this. But Mukherjee is a sympathetic, knowledgeable, perceptive guide, a Virgil shepherding you through the circles of hell. He shows you cancer’s variations and mechanisms–desperate, inventive, fierce, and territorial, he calls them, “a parallel species, one perhaps more adapted to survival than even we are.” But he also shows you how fierce, desperate, inventive, and territorial medical science can be, so by the end, you understand his optimism.

For me, much of Mukherjee’s appeal–and credibility–comes from his honesty about his profession. I should actually put that in the plural, for, as he demonstrates, research scientists and oncologists frequently talk past each other, if they communicate at all. One painful, ironic example is how members of the two disciplines may attend the same conferences without exchanging ideas and go home confirmed in their own methods and prejudices. It’s not that they don’t want to cure cancer; of course they do. It’s that the human traits of pride, stubbornness, and passion for excellence, the qualities that inform the drive for scientific accuracy, may also get in the way.

Unfortunately, patients can get caught in the middle, depending on whatever trend dominates current thinking. For decades, radical surgery was thought to offer the only conceivable cure, and if it didn’t work, the answer was more surgery. During the 1950s, doctors even withheld pain-relieving opiates, insisting that these drugs would lead to addiction, physical deterioration, or even suicide; if the cancer caused pain, cut more flesh until it didn’t. Then the darling became chemotherapy, and if that didn’t work, the answer was to find ever-more toxic drugs, to push the limit of what the human body could stand. However miserable the patients became after being given these poisons, they were still alive, right? To the physician, anything less meant failure.

But, as Mukherjee points out, neither the disease nor the patient belongs to the doctor. And as he also explains, patient choice, especially in a male physician/female patient context, all too often evokes issues of gender, power, and whose ego needs to be assuaged. Yet the author also writes of how difficult it is, as the clinician, to explain the available choices:

Death possessed the imagination of my patients that month, and my task was to repossess imagination from death. It is a task almost impossibly difficult to describe, an operation far more delicate and complex than the administration of a medicine or the performance of surgery. . . . Too much ‘repossession’ and imagination might bloat into delusion. Too little and it might asphyxiate hope altogether.

Mukherjee’s gift for metaphor makes The Emperor of All Maladies a particular pleasure. He writes, for instance, that explosive rise in tobacco use since the Civil War mimics the manner in which a cancer cell metastasizes, an unforgettable image. During the 1950s, when public fear of cancer became more widespread, he compares that to hysteria over nuclear weapons and Communist witch hunts happening at the time–the enemy without and within. Not surprisingly, he also invokes Susan Sontag, who drew her Illness as Metaphor from her grueling struggles with multiple cancers.

I wish Mukherjee had developed these passages, many of which are brilliant. I like how he traces cancer’s impact through history, uncovering, among other things, that the first of what we call carcinogens was recognized in 1715. I also love the science, especially when he explains how cancer cells enlist the body for their own purposes, something I’ve always wanted to understand. But there’s also much he could have left out. I don’t need to know the date, participants, and politics behind each clinical trial; try as he might, the people involved seldom rise above the level of talking heads. His language in these sections mimics businesspeak, using clichés like synergy, leverage, and seminal. I certainly don’t need the blow-by-blow description of how the American Cancer Society came to be.

To me, cancer isn’t about the philanthropists and politicians who outmaneuvered their adversaries to create a corporation. Rather, it’s about the people who have the disease and those who treat them. Luckily, The Emperor of All Maladies focuses on them.