You’ve heard this before: A young warrior, cheated of his birthright by his cruel stepfather, dreams of restoring his lands and honor. But to do so, he’s left his ancestral home to seek glory and wealth. While he’s away, his beloved sister, who depends on him for protection, falls vulnerable to enemies who covet her for her beauty and spirit. And just as he’s about to return, a treacherous assassination attempt almost succeeds, which reveals that he has powerful foes united against him.

But where this novel differs from others that deal with similar themes and rely on similar characters is the setting, ninth-century Norway. It’s a key moment in that country’s history, when Harald Fair-Hair, a young, charismatic leader, is trying to bring myriad jealous, quarreling kings to heel and make a nation of them under his rule. It’s a strange concept, nationhood, and not everyone can get his mind around it; each chieftain worries that his claims and ambitions will be forfeit, and that he’ll owe fealty to a boy who’s done nothing special. 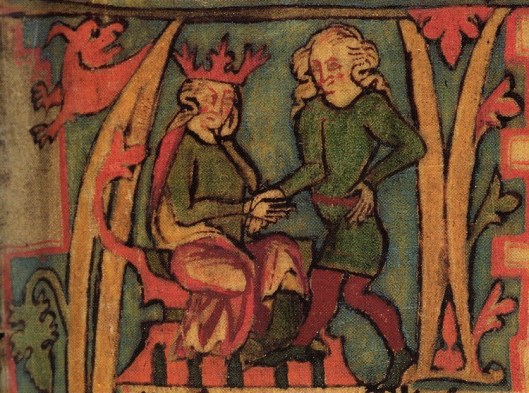 Hartsuyker captures that feeling well, without succumbing to the temptation to permit her best and brightest characters to see into the future, which would be trite as well as improbable. Rather, she lets her two main characters hold ideas that set them apart from their contemporaries, but without overdoing it. Ragnvald, the warrior who fights to regain his birthright, sees value in a single, united kingdom, which would end the constant internal feuds and provide a stronger defense against foreign raiders. He also wonders why innocent relatives of wrongdoers must be punished, or why, after a successful battle, the victors should rape, kill, and pillage at will, wreaking violence on people who can’t hurt them anymore. But Ragnvald’s not especially enlightened beyond his time. Like every other Norseman who calls himself a man, he believes insults are a fighting matter, a dangerous quality for the irascible sort he is. And like everyone else, he’s very superstitious, as when he battles what he thinks is a dead man’s spirit:

A silhouette at first against the charcoal sky, it lurched over the uneven ground. With every step it stumbled, only to recover its balance just before falling. Its clumsiness made it seem more implacable, as though it would plow over and through anything that lay in its path. It had been a big man in life, broad and bearded. Now the face seemed dark, the beard matted. Far-off lightning crackled behind it. Ragnvald stood staring at it for a moment before recovering enough to draw his sword.

Meanwhile, Ragnvald’s sister, Svanhild, has yearnings and a quick mind considered unwomanly by some. She longs to escape their stepfather and the lecherous suitor he’s arranged for her, and she dreams of taking to sea, visiting other places, even–dare she think it–marrying a raider. She has little fear of talking back to men or challenging their political beliefs, which makes her the ninth-century equivalent of a firecracker. But, just as her brother is no Abraham Lincoln, she’s no feminist, for she never assumes that her role in life could be anything other than wife and mother, or that her sons would grow up to be anything other than sturdy warriors. Hartsuyker doesn’t push too far.

She plots her story well. Nothing goes as planned, so no-and-furthermore thrives in this icy north, and simmering tempers provide all the heat anybody needs. But The Half-Drowned King, though it has its share of fighting, is more about the politics of ever-shifting alliances, how a wise leader looks beyond immediate advantage, and how Ragnvald and Svanhild hew their separate paths. Hartsuyker does the politics especially well and uses her command of Norse ways–their system of justice, for example–to great effect.

The Half-Drowned King makes for interesting historical fiction because of its setting, but it’s less satisfying in its characters, who, despite their quirks, resemble talking heads. Hartsuyker tells the story almost entirely through dialogue, and she often recaps what her characters have just said, as if it weren’t already clear. The lack of contractions can sound stilted, and you sometimes get the feeling that the speakers are expecting a bard to turn their declarations into song–which, in fact, happens occasionally.

Reflection usually comes in brief, half-illuminating bursts. Consider this example: “Her mixture of innocence and ruthlessness was charming, and he could never decide whether he wanted her to keep her pretty pictures of the world, or learn his own cruel lessons.” It’s an explanation in trite language, not an exploration, and the implied emotional transition–which whizzes by like an arrow–deserves more.

The same could be said of The Half-Drowned King, a readable but not memorable novel.