Peter Schoeffer, scribe, thinks he has it made. He loves Paris, his adopted city, where the Seine smells “of chalk and stone, a sharp and thrilling city thriving.” At twenty-five, he sees a path upward, because the Church will pay for manuscripts penned in a fine hand such as his.

But in September 1450, his stepfather, a wealthy merchant and bookseller, summons him home to Mainz without saying why, and you sense Peter’s resentment at the peremptory recall.

The reason makes Peter feel even worse. He’s to accept an apprenticeship—at his age, with his accomplishments!—to aid an effort that feels both socially beneath him and blasphemous. But he can’t say no, because stepdad has raised him, educated him, and made him who he is. But to be shackled to a stinking, cellar workshop and its forge alongside half-educated smiths offends his pride and aesthetic soul. He’s also uncertain where he belongs socially, so he’s free to resent those above and below him. 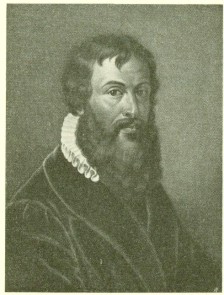 Furthermore, and most important, his new master is Johann Gensfleisch, known as Gutenberg, who’s undertaken a sacrilegious project out of arrogant greed—to produce scores of books at once, selling holy texts for profit. No wonder that everyone’s sworn to secrecy, for if the Church found out, they’d seize everything and have the printers arrested.

Not just that; Gutenberg represents all that Peter has learned to detest. The master belongs to Mainz’s upper crust, called Elders, one of the thirty leading families who treat the city like a fiefdom. The Elders act hand-in-glove with the archbishop to bleed the merchants, guilds, and less exalted citizens for their own gain.

Consequently, that Peter’s stepfather has chosen to bankroll Gutenberg seems corrupt, and his own presence designed to keep an eye on stepdad’s investment—until the young scribe realizes how ruthless, manipulative, and controlling his new master is. Maybe Peter’s there as Gutenberg’s pawn against his chief creditor. In any case, Peter feels like a slave, with no respite from either quarter.

Even so, he admires artistic talent, and Gutenberg never lets anyone forget he’s a genius. Christie has done a terrific job rendering the era, the political machinations, and the process of printing as its inventors devise it on the fly. Most of her characters are historical figures, including Peter, and she reimagines them with flair and attention to detail. The scenes of fashioning, failure, and gradual surmounting of obstacles are as gripping as any; I never appreciated how difficult or painstaking it was to print a book in the fifteenth century, or how many years it took.

Peter’s coming-of-age story, in which his growing technical skill and innovative sense mirror his emotional maturation, works nicely. He also comes to terms with his religious objections to the project, gradually understanding that the Church’s presumed opposition derives partly from its role as sole representative of God on earth, so its guardianship of scribes has both economic and political significance. Reproduce religious texts that any literate person can read, and the printer not only makes scribes superfluous, individual people can seek God for themselves, a gauntlet thrown down to church power. Accordingly, this narrative foreshadows the Reformation, mere decades away.

At its best, Gutenberg’s Apprentice reads like a thriller. Tension arises from the need for secrecy, compromised by the length of time the project takes, the ever-increasing number of participants, and Gutenberg’s indiscretions—he’s constantly cutting deals with clerics and merchants, infuriating Peter’s stepfather and squeezing the young man between two powerful men he’s doomed to displease. Throughout, Christie captures the mindset, the strivings, and the fixation on social class, as with this description of a scriptorium where monks gather to write:

The faces were all known to him—in the way that any face, in a place as small as Mainz, was known. They didn’t change: the jowls just spread, the noses grew redder and more bulbous. Elders all, patricians from the city or the minor nobles from the land: the clergy was made up of second sons from wealthy families, stashed and suckled by the Mother Church for life. . .He was a stranger, with a stranger’s anonymity, which brought both freedom and a certain risk.

In such a complicated narrative, it’s not always easy to penetrate the politics, despite Christie’s gift for depicting the power struggles. I’m also not persuaded, in a couple instances, that Peter would either forgive his stepfather his hard hand or feel warmly toward him; these crucial transitions seem rushed or simple.

But overall, Gutenberg’s Apprentice does what excellent historical fiction should do, and I highly recommend it.