Zuleikha Valieva lives an oppressed existence. It’s not because she lives in a village near Kazan, USSR, 1930, and the Soviet regime crushes her, though it’s about to. Rather, her husband, Murtaza, gives her nothing except hard blows and harder words, using her as beast of burden and sex object and haranguing her every move — that is, when he bothers to notice. Murtaza’s mother is even worse. She promises that the fates will punish Zuleikha, who’s a weakling, good for nothing — hasn’t she given birth only to daughters, all four of whom have died in infancy? — while Murtaza, like Mama, is strong, a born survivor.

But prophecy isn’t her chief talent, for the Soviet administration has decided that kulaks — landowning peasants, like the Valievs — are enemies of the state. And when soldiers come for their grain, livestock, and butter to feed the city populace, Murtaza fights back and dies for it. 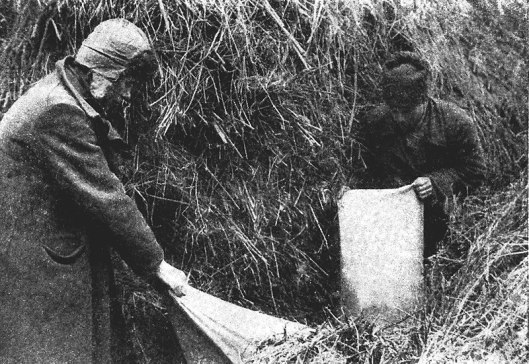 Good riddance, you think. But Zuleikha has believed every harsh word ever spoken to her and figures that Allah has marked her for punishment. Scared to death of what will happen next, she doesn’t understand why she must leave her village to go someplace far away; she, like many other kulaks and other “undesirables,” are being exiled, though no one will say where they’re headed. But what Zuleikha and her companions don’t realize is that they’ve just been handed a ticket to freedom. The rest of the novel shows how that happens, to what degree, and how much happiness, if any, they derive from living at the ends of the earth.

Aside from her ability to work her fingers to the bone, because that’s what life demands, Zuleikha has a fatalistic outlook that will stand her in good stead:

Death is everywhere. Zuleikha grasped that back in her childhood. Tremblingly soft chicks covered in the downiest sunny yellow fluff, curly-haired lambs scented with hay and warm milk, the first spring moths, and rosy apples filled with heavy sugary juice — all of them carried within themselves the germ of future dying. All it took was for something to happen — sometimes this was obvious, though sometimes it was accidental, fleeting, and not at all noticeable to the eye — and then the beating of life would stop within the living, ceding its place to disintegration and decay.… The fate of her own children was confirmation of that, too.

Other notable characters include a demented doctor who’s somehow a capable clinician; the camp lickspittle, a truly despicable sort who always bobs up like a cork, no matter who pushes him down; and a couple members of the intelligentsia, city slickers who’ve seen Paris, not just Leningrad or Moscow. The camp commandant, who killed Murtaza and has a thing for Zuleikha’s green eyes, comes to feel for his charges, though he can’t say so or even let himself think it. For all these, banishment to Siberia spares them from worse punishment, for the camp is a backwater, where purges don’t reach.

You just know that these people, had they remained where they were, would have been swept up by the secret police, even—especially—the commandant. For the longest time, he resents his posting, in his pride mistakenly thinking that the bureaucracy has shunted him aside, after all his many accomplishments. The political message comes through loud and clear, though Yakhina never spells it out: Here’s a cross-section of people who, for better and worse, built the Soviet state, receiving no thanks for their pains and, more often, a whip across the face.

Zuleikha has a touch of the fairytale—witness the demented doctor who remembers a remarkable amount of his training—yet reality takes front and center. In fact, when the pain of what he experiences penetrates his consciousness, he has the persistent fantasy that he’s living inside an eggshell, which shields him from the suffering all around and allows him to exist. So even when Yakhina surrenders to gauzy fantasies, she tries to twist them, make them her own.

You won’t recognize Solzhenitsyn’s gulag in her Siberian camp, though many exiles die from the harsh atmosphere and poor food. She’s more interested in the survivors, who find skills or character traits they didn’t know they had. In this, Zuleikha is Exhibit A. Her acquisition of a spine is a marvelous transformation to behold, and Yakhina’s careful not to let her consummate masochist turn into a different person altogether. Nevertheless, at times I wonder whether our heroine would be able to achieve what her creator intends, even less that Zuleikha feels drawn to the commandant, who killed her husband, after all — though, to be fair, her sense of attraction causes her guilt.

Overall, however, Zuleikha is an excellent novel, a first novel, surprisingly, full of rich, evocative prose, sharp political commentary, and a story cast against type. I recommend it.

Disclaimer: I obtained a reading copy of this book from the public library.