Early one morning, Claire Dixon wakes because of painful symptoms of gonorrhea, which she could only have contracted from her husband, Travis. In a fury, she bundles their two children into the old car and sets off for her mother’s house nearby. The older woman, none too pleased to be roused, nor to have house guests, acts as though these burdens can only be redeemed through the arduous chores she has planned for her eleven-year-old grandson.

What a thrilling opening; you see Claire’s predicament instantly and can’t help put yourself in her place. And since this is sometime around 1936 or 1937 in small-town, western Tennessee near Memphis, hard times elicit hardness in people, while gossip about the Dixons will surely become cheap entertainment. It’s a hardscrabble place, Dawsonville, and the only hope for the future is the dam under construction that will provide the area with electricity for the first time. Not everyone greets the project with enthusiasm, either, for the federal government is the builder, which evokes fears of taxes, intrusion, or invasion by city slickers.

One such newcomer is Nathan McReaken, a young electrical engineer from Memphis, but the way people treat him, he might as well hail from the dark side of the moon. He’s trying to catch on with the dam’s engineering office, no easy task, despite his impressive resume. Nathan’s granted a ninety-day tryout, reaching the end of which will require cleverness, talent, and political skills.

Like a bunch of other out-of-towners, he rents a room in a boardinghouse run by Claire’s Aunt Irma. But unlike them, he has a keener, more nuanced sense of his surroundings, and he’s far more sophisticated intellectually and emotionally, though that’s not hard. Unfortunately, he’s taken professional risks in the past, and he’s running from a mistake for which he’s been unfairly blamed. So, like Claire, he fears for his reputation too.

The 1930s and the New Deal fascinate me, so I was primed for this book. I also love the engineering office politics, easily the strongest scenes in the novel, and the cutthroat competition just to have a paying job, which brilliantly captures the desperation of the Thirties. The descriptions of the construction process and the difficulties of supply and labor offer a glimpse of how remarkable the effort was — and when you realize that this dam was only one of thousands of government projects, you have to be awed. On a more human scale, Nathan’s voice represents the passion and professionalism behind the project. He comes through loud and clear, expressing his acuity but also his loneliness:

Downstairs someone coughed. He pictured the boardinghouse as if it were a child’s miniature, each of them a doll in its own compartment. There was only the cough, the scuff of a shoe, the sudden voice raised in laughter, that told you someone was really there. A half-dozen lives playing out in parallel.

However, Watershed’s parts don’t cohere. I don’t know how Claire decides, as she does, to make something better of herself; at times, she hardly seems the unsophisticated “country girl,” as described, so what’s she changing from? She’s certainly not her mother’s daughter, and I feel I know the older woman better, what her standards are, what she cares about most, and why. Three men want Claire, or act as though they do, but, other than her prettiness, I can’t say what motivates them. Nathan, who believes he’s meant for her, just “feels right” in her presence. Okay, but the three men spend so much time maneuvering around each other, I begin to think Claire’s more an object of desire than a full person. I will say that after Travis, a complete boor, practically a thug — why did she marry him, again? — Claire’s next romantic choice makes sense.

But mostly, Watershed loses its way after its powerful start. Many chapters, though too brief to digress far and well written, have nothing to do with the story and exist only to show attitudes toward the dam and the electricity that will come. Though I like these themes, I wish Barr had confined them to scenes in which his protagonists appear, which would have felt natural, not shoehorned in. Without revealing too much, I note that these favorite themes loom so large at the end, they confuse the resolution, which zips by. Twice, I looked back after finishing the book to be sure I hadn’t missed a brief chapter or section. I’m still puzzled.

Watershed reached print through the generosity of Charles Frazier, whose Cold Mountain Fund dedicates itself to bringing southern writers into print. I applaud this mission with fervor and look forward to future offerings. However, I urge the powers behind Watershed, whether the fund or the publisher, to devote more resources to proofreading. Watershed suffers from many errors, not just dropped letters or words, some of which make the dialogue hard to follow.

Come August 3, 1936, the east Tennessee town of Yuneetah will cease to exist. On that day, the Tennessee Valley Authority, part of FDR’s New Deal, will unleash the Long Man River, and the dam built at its headwaters will submerge the valley. Most residents have left the land their forebears had settled for centuries, whether because the hardscrabble soil couldn’t feed them or, more recently, they bowed to the government’s eviction notices. But Annie Clyde Dodson, who can trace her lineage in part to the Cherokees who hunted this valley, isn’t going anywhere. She’ll stay, even to risk her life and that of her three-year-old daughter, Gracie, even to say goodbye to her devoted husband, James, who’s found a factory job in Michigan. 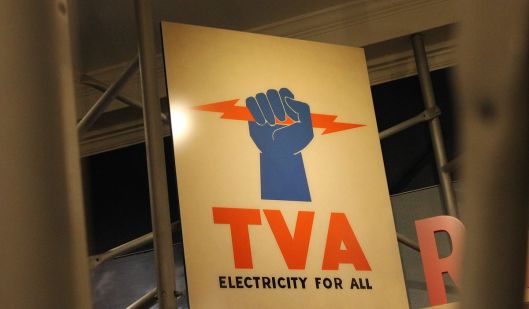 From the first words, you see Annie Clyde’s mindset, as she overlooks her limestone ridge at sunset:

She would watch with her knees gathered up as the last light mellowed into dusk, falling down the piney bluffs. Before half the homesteads were razed the lowering sun would stain the tin roofs of houses and barns, deepening the rust to oxblood. Gilding wheat sheaves and tobacco rows, shading red clay furrows. Last summer she might have heard a farmer calling in his cows. . . . But now there was only stillness and silence besides the tree frogs singing as twilight drifted toward night.

Such spare, potent prose brings life to these age-old themes of blood, land, and power. That power comes in two forms. One is the electricity the dam will produce, new to eastern Tennessee, and in which everyone will share. The other is the power to take homes away, wielded by bureaucrats who have nothing but contempt for the people who live in them.

But though Long Man treads perilously close to a self-righteous tale pitting salt-of-the-earth farmers against evil city slickers, Greene takes the high road with her main characters. Annie Clyde, as you may have guessed, is almost fatally stubborn, the type who refuses to listen to anyone. So when James announces his intention to move to Michigan, she cuts him dead, and he tries vainly to fight off the conclusion that she’s never loved him. When he finally gathers the courage to confront her, she won’t discuss it, which only hurts him more. But just as she fears leaving Yuneetah would mean abandoning the best part of herself, what she loves about the land, her property, and her ancestors’ graves–her life, in other words–he has his own story.

It’s not just that James hates farming–eating dust, watching the heat burn the corn, and hoping that the next heavy rain won’t wash away what little topsoil is left. Rather, the valley frightens him, for he watched his father drown in one of many floods that the Long Man inflicts on the long-suffering population. Even if they could stay–if the dam didn’t make that impossible–James wants a life where he need not fear for himself or his family, where earning a living need not be such a struggle, where the hard environment won’t kill them before their time.

Nevertheless, as the deadline looms, James realizes that if he goes to Michigan, Annie Clyde will stay behind with Gracie. But during a heavy rainstorm, Gracie disappears, and suddenly the whole population joins the hunt for a child whose spirit and cheerfulness have made her beloved. It’s as if everyone tacitly believes that if she were to die, there’d be no hope left in the world.

Long Man offers many pleasures, not least the subtle symbolism, which feels almost biblical in scope. It’s like the Flood that will sweep away an old world; but there’s no ark, no Noah, and, most important, no God to watch over anyone. I also like the name Yuneetah, which reminds me of a famous biscuit, an ironic similarity–you need this dam. But Annie Clyde thinks she doesn’t, and she’s betting that the new world the water brings will be worse than the old.

I also like Greene’s characterizations. Besides the two principals, the most memorable is Amos, a drifter from Yuneetah who’s mean, unpredictable, and the definition of passive-aggressive, but who thinks he has the charismatic spirit everyone else lacks–and may be right. However, Greene sometimes interrupts her narrative for backstory about a minor figure, and though I understand her desire to give everyone his or her due, that can go too far. I also find it unbelievable that the only social prejudices belong to the bureaucrats, and that nobody talks about race–this is 1936, after all, in the South.