Isabel Osmond (née Archer) has disobeyed her husband, Gilbert, something she’s never done before. Against his will, she’s left their home in Rome to visit her dying cousin in England. After the funeral, friends urge Isabel not to return to Gilbert — a remarkable notion for the 1880s – whose cruelty and deceit have ruined any hope of happiness.

Readers of The Portrait of a Lady, the Henry James masterpiece, will recognize the situation and characters. They will also know that Isabel wouldn’t dream of taking flight from her lawfully wedded husband. But Banville has set his imagination to work, and he finds much meat in what an American-born woman of the Victorian Age would do if she discovered that her vicious husband had married her only for her money.

To pen a sequel to Henry James requires a bold, confident hand and a finely perceptive eye. Only a writer as experienced and gifted as Banville would even attempt it, and he succeeds brilliantly. Not only has he captured the Jamesian style, the discursive loop-the-loop sentences that end dead center in observed truth; like the master, Banville derives intense feeling from a gesture or an inflection of voice. As with the original, what’s left between the lines often means more than what is said. Where modern authors interrupt their narratives to reveal their characters’ inner lives (if they bother), for James, there isn’t anything but inner life. For readers who expect a faster-moving story, his approach may be an acquired taste. But he creates tension through deep emotional connection; so too with Banville and Mrs. Osmond.

Letting her eyes close, Isabel dipped into the dark behind her lids as if into the mossy coolness of a forest pool. Yet she could not linger long, for in that darkness she was sure to meet the padding, yellow-eyed, implacable creature that was her conscience. Strange: she it was who had been wronged, grievously wronged, by her husband, and by a woman whom she considered, if not her ally, then not her enemy either, yet it was she herself who felt the shame of the thing.

But to call this novel imitation James hardly does it justice. Where James expounds on the loss of innocence, a favorite theme, especially regarding Americans residing in Europe, Banville emphasizes Isabel’s masochism, so deep and relished that it amounts to vanity. There are stretches in Mrs. Osmond in which I wanted to hit her over the head, because I detest masochism and dislike literary characters who don’t struggle against it the way I’d want them to. But Isabel’s excessive sense of duty is also painful, since Gilbert Osmond must rank among the most odious husbands in literature. He’d never stoop to physical violence or even profanity, never raises his voice, and would consider it gauche and beneath him to be drunk. Yet he pulverizes everyone around him through fifty shades of disdain, many of which require no words. 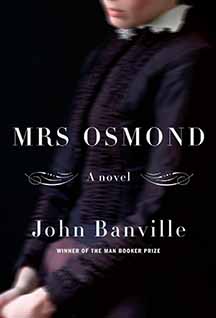 Consequently, Isabel’s physical journey from London back to Rome takes second place to her inner travels. She believes she must confront Gilbert, a task that requires steeling herself and gathering information, but while she’s doing that, she tries to figure out who she is and what she wants and deserves. Naturally, she goes back and forth, because when you have spent your life as a doormat, even the experience of being cheated and lied to in the worst possible way doesn’t necessarily qualify you to stand up for yourself. Nevertheless, when Gilbert and she finally do meet, it doesn’t go as either of them expects.

I’m not the type to read modern takes on Jane Austen or Conan Doyle, but I made an exception with Mrs. Osmond and am glad I did. We’ve all known someone like Isabel, and it makes no difference that this version of her comes from the nineteenth century. You need not have read The Portrait of a Lady to enjoy it– Banville seems to assume no knowledge of it—but I appreciated the sequel more for having done so.

Disclaimer: I obtained my reading copy of this book from the publisher via Historical Novels Review, which published this post in shorter, different form.