Review: The Pasha of Cuisine, by Saygin Ersin
Translated from the Turkish by Mark David Wyers
Arcade, 2016. 281 pp. $26

Once upon a time in Constantinople, a cook wangles a job at the sultan’s palace so he can spring the woman he loves from the harem. Is he dreaming? Does he really think he can infiltrate that inner sanctum, forbidden to all males save eunuchs, and spirit his lover away, let alone live to tell about it?

Not exactly. And the manner in which the cook — who has no other name — sets about his quest makes for a highly entertaining (and mouth-watering) narrative, recounted in a style reminiscent of the Arabian Nights. As you may imagine, “no — and furthermore” resides here, the penalty for failure is unthinkable, and there is considerable back story. 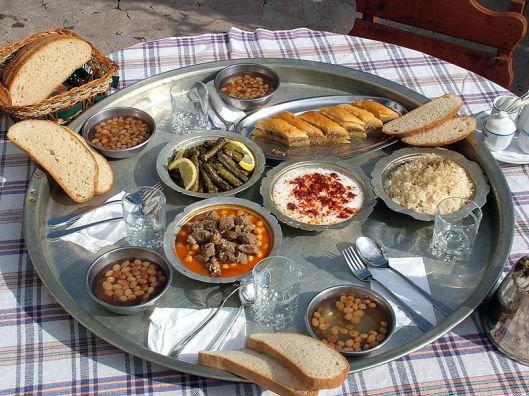 How does the cook, whom many call the Pasha of Cuisine, a title earned through talent and study and testament to his unique powers, come to be where he is? No one knows. What sorcery informs his skill, or, for believers in rational thought, why do his dishes have the effects they do? No one can figure that out either, though they try.

So there are two mysteries here, the man and his plan, and both depend on cooking. I’m all for that. And since it’s a cultural given that a Pasha of Cuisine cooks not only for himself or his patron or employer, but to raise the level of taste and appreciation throughout the land — so much so that harvests become more bountiful — the cook’s gift has a public meaning. Much rests on that, for his ability, his presence, open doors closed to ordinary chefs, let alone the story itself, wouldn’t work without that instant entrée.

That talent cuts two ways, however, for, as with anyone who works at the palace, you take your life in your hands:

Like the other [palace] gate, the Gate of Salutation was a passage, but much longer. The light at the other end seemed to be far, far away, as though symbolizing the plight of those who passed through. Living at the palace was a journey, the end of which was unknown as you walked through the Gate of Salutation. That held true for everyone, from the youngest page to His Highness the Sultan himself. You walked toward the light, yet it seemed that you’d never reach it. Your life spilled onto that infinite road moment by moment, hour by hour, and day by day; you were filled with the fear that you may be plunged into darkness at any time. And in the end, your life would be extinguished either at the hands of an executioner or by a natural death, at best becoming a few lines in a dusty history book.

Like all heroes on a quest, our cook has a tragic past, which influences what he has learned and how he has gone about it. Among his lessons are the six layers of taste; the ineffable names of flavors and aromas; and the spiritual powers of food to influence mood and character, moderated by bodily humors and the signs of the zodiac. It’s complicated but always intriguing.

Just as his education, his outer journey, leads him to the palace, his inner journey involves coming to terms with the pain he would rather forget. I like this psychological and philosophical aspect better than the concoctions themselves or the studies that inform them, not only because they are character-dependent, and character is a flimsy reed here, but also because of the storytelling style.

As in the paragraph quoted above, Ersin adopts a wide, omniscient lens, and though that suits his tale in a way—and is likely traditional–it also distances the reader. The narrative explains more than shows, and even when you see the action, in which people yield to the cook’s wishes, that miraculous quality I referred to earlier, you don’t always feel as if you’re in the scene. That applies particularly in the book’s first half, whereas, during the cook’s psychological quest, he and his surroundings come through more clearly.

Consequently, the narrative hangs mostly on the cook’s clever machinations and Byzantine plot twists (sorry; I couldn’t resist), not always satisfying, as they seem ordained, despite the depth of the struggle.

Yet The Pasha of Cuisine is worth your time as an entertaining tale of romance and intrigue. And if you read it, I suggest having snacks handy — tasty mezes, perhaps.

Review: The Fall of the Ottomans: The Great War in the Middle East, by Eugene Rogan
Basic, 2015. 485 pp. $32
Not everyone will be interested in how and why the Ottoman Empire entered the First World War, and what resulted, but maybe they should be. Pick any current headline about that region, and you’ll find its roots in Rogan’s narrative, whether it’s Turkish denial of the Armenian genocide, machinations over Iraqi oil, or the Arab-Israeli conflict.

Of the four imperial thrones that the war toppled, Westerners probably know least about the Ottomans. (The other three were Germany, Austria-Hungary, and Russia.) Turkey, having fought two revolutions and three wars between 1908 and 1914, needed peace desperately. By playing the Russians off against the Germans, Turkish diplomats adeptly sought promises that would allow their country to remain neutral. But hawks who feared that their empire would break apart unless Turkey backed the winning side, successfully pushed to join the Central Powers.

You have to wonder how history might have played out had Turkey stayed neutral. What, for instance, would have happened to Palestine and the oil-producing regions? I wish Rogan had devoted space to this, but he doesn’t go in for speculation. Rather, using an astonishingly impressive array of Turkish, Arab, and European sources, he traces military campaigns and the politics that influenced or resulted from them, quoting the participants. Rogan argues that the diplomatic promises the Allies made to each other, Arab nationalists, or Zionists, derived from panic (usually overblown fears of jihadists) or fuzzy, short-term thinking. If pressed, Allied diplomats would have insisted they had promised less than the potential beneficiaries believed. Little did they know how their words would be parsed for decades to come.

From the military side, Gallipoli gets much of Rogan’s attention, deservedly so. From the Turkish perspective, the Allied invasion signified the Crusades revisited, an attitude prevalent in the Middle East today concerning Western military power. The Turkish victory, which cost the Ottomans even more lives than the Allies, resulted from tenacity and brilliant generalship. The Allied disaster came about from ad hoc strategy executed by inept tacticians; if you believe, as I do, that the British and imperial soldiery were lions led by donkeys, Gallipoli could be Exhibit A. Rogan captures the misery, the heroism, and the fear, as with this memoir of the last moments before “going over the top”:

The moments appeared like hours–the suspense–then the officer, his eyes glued on his watch following that finger (of death) slowly, so slowly, but surely moving to destruction–maybe a second left to live–for this is sacrifice–this is the moment when all hearts are sad and heavy–when you will hear some muttering a prayer. . . .

But the greatest service Rogan renders in The Fall of the Ottomans is, I think, his thorough, vivid, and decisive handling of the Armenian genocide. To show how the tension between Turk and Armenian increased, he explains Turkish fears of Armenian collaboration with the Russian enemy, for which there was some evidence. As for what followed, Rogan names names, places, dates, and, when possible, numbers. His chilling descriptions recall aspects of the Holocaust, as with eager civilians who participated, or long, forced marches, during which thousands of Armenians, dying of thirst or starvation, were clubbed or bayoneted to death. I didn’t know that Greek Christians were deported and dispossessed (though not killed), or that Assyrian Christians met the same fate as the Armenians. These facts, rarely mentioned, are surely significant.

After the war ended, the Turkish government prosecuted eighteen defendants accused of ordering or carrying out the massacres, hanging a few and convicting the others in absentia. (Armenian agents tracked down the missing defendants and assassinated all but one.) Apparently, the Turks were trying to placate the victors, hoping to gain favorable peace terms. When that didn’t work, the country went to war again, led by Mustafa Kemal, the hero of Gallipoli, and fixed the borders more to Turkish liking. Whether that resentment led to Turkish intransigence about admitting the genocide, Rogan doesn’t speculate.

I’d have liked The Fall of the Ottomans much better had the author written more carefully. The narrative, full of repetitions and clumsy phrases, plods sometimes. But if you read this book, I guarantee that you won’t look at Middle Eastern politics in quite the same way again.