In the autumn of 1952, with “I Like Ike” signs sprouting in the North Carolina lowlands, up in the Blue Ridge Mountains, Maybelline Docherty is her own authority, thank you. Known as Granny May, like most mountain folk thereabouts, she’s had a hard life. Her husband died young in the First World War; their daughter lives in an institution and hasn’t spoken in twenty-odd years; and Granny May’s grandson, Rory, lost part of a leg fighting with the Marines in Korea and has been drifting and moody ever since. But Granny May doesn’t know the meaning of the word surrender, and she intends to continue enjoying life to the fullest. As a former prostitute, she makes polite folk turn away. But they still drive up the mountain for her herbal remedies, which they fear as possibly un-Christian yet wish to believe in, and she’s famous for her cakes. 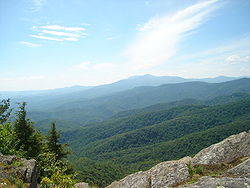 Rory troubles her, however. He earns a good living running moonshine to buyers off the mountain, which puts him in the crosshairs of the police, who can sometimes be bribed. But there’s a new Federal revenue agent in town who plays by different rules, and as Rory soon learns, he’s a sadist of the first order. Meanwhile, Rory feuds with Cooley Muldoon, a young buck with more swagger than brains who’s willing to match Rory blow for blow, and whose father owns the largest piece of the moonshine business. Between these two threats and an attraction for a preacher’s daughter who handles venomous snakes as part of the church service, Rory has chosen to live dangerously. But Granny May says, “Christ’s father let him die on that cross.… But Christ never had no Granny like me.”

In my review of Fallen Land, Brown’s previous book, I loved the prose and the pacing but faulted the too-easily resolved conflicts between the main characters and the intellectually sophisticated observations that came from the mouths of unschooled teenagers. Not here. Gods of Howl Mountain is a much better, more complex, more believable novel, and its power propels you through the narrative, much like the engine in Rory’s beloved souped-up muscle car, named (of course) Maybelline. Rory and Granny May are compelling characters, their dialogue credible, and often a hoot besides.

Once or twice, you may come across a reference to something you might not expect, or said in a way that seems out of character, but those instances don’t intrude. If there’s a weak link, it’s Cooley Muldoon, the villain, who’s got nothing to recommend him and is simply villainous. He’s relentless, though, and very inventive, so nothing will be easily resolved, you can bank on that. Granny May’s traumatized daughter, Bonni, seems idealized, as though Rory’s view of her is actually accurate. I also wonder whether Bonni’s silence is too convenient, being essential to the plot. Rory has undertaken to find out exactly what renders her speechless, and who’s responsible. I like that part of the narrative, but I think it might have worked better had the story not turned on that device.

The prose, however, needs no qualifiers, and it’s the first thing that strikes you about Gods of Howl Mountain:

[Granny May] squinted down her nose, eyeing the tree in the yard. This tree, lone survivor of the blight, stood a centerpiece of all she surveyed from her porch. The others of its kind, chestnuts, had once covered these mountains, the bark of their trunks deeply furrowed, age-twisted like the strands of giant steel cables. Their leaves sawtoothed, golden this time of year, when the falling nuts fattened the beasts of the land, sweetening their meat. That army of hardwoods had fallen, victims of death-black cankers that starved and toppled them. Some exotic fungus had slipped in through wounds in their bark, the work of antlers or claws or penknives. This tree stood alone in the meadow, crowned high against the impending light.
A spirit tree.

This is Granny May’s first appearance, and it’s as though she were that tree, unblighted, standing tall, determined to live her way, from the land and part of it.

With Gods of Howl Mountain, Brown has gone a big step further from the promise revealed in Fallen Land, and I recommend it.