Ukraine, autumn 1941, and the German invasion of Russia is now several months old. At first light, two young boys flee across their small town, trying to reach the schoolmaster’s house, in hopes he can tell them where to hide, whom to trust, assuming the rumors are true. But before they can get there, the Germans’ trucks roll in, and the boys must escape the unexpected trap.

The trucks’ arrival wakes Otto Pohl, a Wehrmacht engineer building a road through this forested, often marshy countryside, so that the invading forces may be efficiently supplied and reinforced. Otto’s a good sort, a conscientious man who believes the war to be criminal, which is why he volunteered to build a road in the Eastern wilderness, thinking that as army service went, he’d never be forced to see or do anything he’d hate himself for. He’s about to be proven wrong.

The Germans round up every Jew in town and drive them into a brick works, where they’re forced to stand, awaiting what they believe is transport further East. No one in town much cares; the victims are only Jews. What they do care about is the strict curfew the Germans have imposed and the constant threat of search and seizure. Nevertheless, Yasia, the teenage daughter of a prosperous farmer, decides to risk trying to reach her boyfriend, a deserter from the Red Army, now working for the invaders. She too sees more than she wanted. 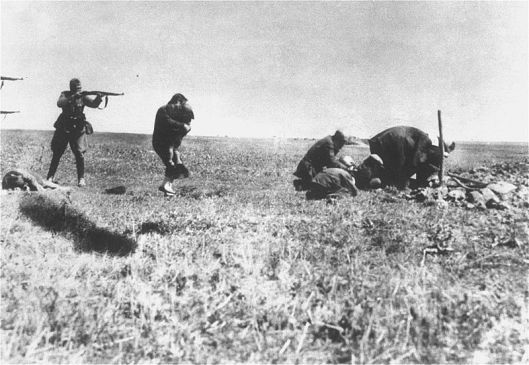 Murder of Jews by SS paramilitaries, Invanhorod, Ukraine, 1942. This photo was taken by a German soldier serving in the East; a member of the Polish Resistance working in the Warsaw post office intercepted it for future documentation. (Courtesy Wikimedia Commons via Historical Archives, Warsaw; public domain)

Three things distinguish A Boy in Winter from the average Holocaust novel. The first is a refreshing lack of earnestness. Nobody makes any speeches about right or wrong to condemn or embrace anti-Semitism or the German regime. In fact, the characters say very little, though their thoughts, gestures, and actions speak loudly.

The characterizations, the second key asset, are so strong and nuanced — even the SS commandant — that you understand why things happen the way they do. There are no heroes here, only powerless people trying to balance fear and suspicion against their will to get by and see another day. A great many evils can happen through that calculus, but Seiffert is much more interested in showing them than in criticizing. And by focusing on the very small picture rather than the large one, she has much to say about both. For instance, why are the two boys the only ones who try to run away? Why is Yasia the only onlooker not to keep her head down? The answers lie in character, not plot manipulation, but more than that, you can’t read this novel without plugging yourself in place of these characters and wondering what you would do.

The third way A Boy in Winter succeeds is in its moral compass, which points not to redemption but the possibility of some small mercy. An overdetermined authorial urge for redemption has marred many an otherwise fine book, and, since it’s a Christian concept, I like it even less in a Holocaust novel. By reaching for less heavenly attributes — for what’s only a glimmer in this world of mortals — Seiffert achieves more.

To do so, she writes in spare, elegant prose, precisely fitting her spare, elegant narrative. Consider this flashback passage about Yankel, the elder boy who runs away (and the title character), through the eyes of his father, Ephraim. Yankel loves to look at photographs of his uncle Jaakov, Ephraim’s brother, who emigrated to Palestine:

He asked more about Jaakov as he got older, wanting more often to hear the stories of his travels and his olive trees, or even just to see his photo… And though Yankel sat with it quietly, content with his own thoughts, never saying very much, Ephraim saw — not without pain — the admiration in his son’s gaze. He began to feel, too, how his eldest’s eyes measured him, silently: the narrow walls of his workshop, the fastidious labour in the lenses he ground there, the tiny screws he tightened to hold them in their wire frames. The scope of his life was meagre, seen against his brother-in-law’s.

Not only is this a beautiful, evocative passage, revealing in a physical sense the rift between father and son, you understand why Ephraim is anxious to follow the Germans’ orders, whereas Yankel has no hesitation disobeying them. How Yankel got to be that way is of course very important, but Seiffert brings you there, just as she brings you everywhere else you need to go.

A Boy in Winter is a sublime, powerful, brilliant novel, among the finest about its subject that I’ve ever read.