The title character of this novel observes in 1865, “Civilization balances always on a keen and precarious point, a showman spinning a fine Spode dinner plate on a long dowel slender as a stem of hay. A puff of breath, a moment’s lost attention, and it’s all gone, crashed to ruination, shards in the dirt.”

Varina Howell Davis knows whereof she speaks. Not only has she seen her native South provoke a catastrophic civil war, her husband has led the charge as president of the Confederacy. Even when the cause rides high, she can’t go anywhere without hearing vicious gossip about herself and Jeff, which becomes ever more strident as defeat looms. Personal tragedy dogs her as well; most of their children die very young, leaving her perpetually in mourning, and her marriage has been a disaster from the first. As the barely eighteen-year-old bride to a much older, widower husband, Varina doesn’t reckon on his cold stubbornness, his political ambitions, habit of breaking promises, financial chicanery, or abiding obsession with his late wife. Not all of this is Varina’s naïveté, however. Her father, having lost his fortune to speculation, tosses her into the hands of a relative who browbeats the women who make up his household. Consequently, Jeff Davis offers freedom, she thinks, an irony that underlies the entire narrative. 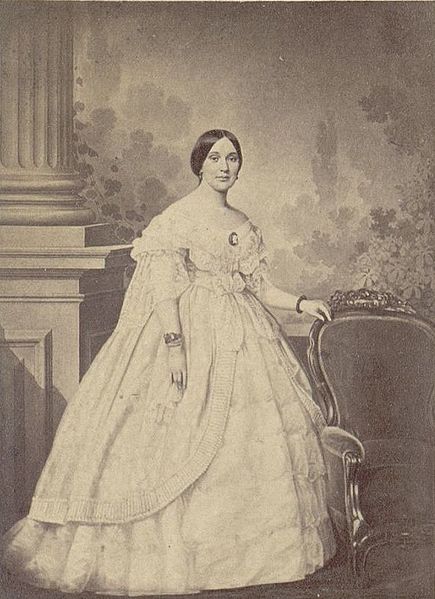 All this turmoil might provide drama enough for three novels, but the astonishing thing about Varina is that it fails to add up even to one. Frazier has grounded his tale in 1906, when Varina is living in Saratoga, New York, at a hotel-cum-therapy establishment, and a figure from her distant past drops in. This is James Blake, whom Varina adopted off a Richmond street during the war, and who has tracked her down to try to piece together the fragments of his early life. His Sunday visits prompt her recollections, which spin the narrative of her life as well.

I dislike this way of telling stories, which seems unnatural and forced–“let me now recount my life”–yet there’s something here that commands attention. James is black, though light-skinned, whereas Varina is dark-complected, which has opened her to ridicule and prejudice throughout her life in the South. James is therefore the prime mover and Varina’s conscience on racial attitudes, a brilliant thematic setup.

Unfortunately, it falls flat. The retrospective narrative jumps around incessantly, as you would expect an oral memoir to do, and the myriad episodes don’t hang together. Frazier creates several marvelous vignettes, introducing, among others, Franklin Pierce, Zachary Taylor, Oscar Wilde, James McNeill Whistler, and Varina’s good friend and famous diarist, the warm, ebullient Mary Chesnut. But there’s no plot to speak of; no urgent question to answer; no secrets to unravel; and therefore no climax. Sometimes there’s tension, but more often not, for the vignettes, though sometimes interesting, seldom engage you emotionally. Frazier relies on Varina’s moral pronouncements and his ability to set a scene, both of which he expresses in imagery that, at its best, leaps off the page.

But does that equal a novel, or at least, a good novel? I say no, especially because Varina is the only character of any depth. She’s a terrific tragic figure, possessing remarkable strength and heartfelt eloquence (if, at odd moments, she sounds like a psychotherapist). But James remains a vague character, part stage prompter, part Greek chorus. You see Jeff’s flaws out loud, but the rest of him remains abstract; and if there was ever a complicated leader, it was Jefferson Davis — who, in reality, sought a battlefield command rather than political leadership. Frazier notes that he enjoys combat — Davis attended West Point, after all — but doesn’t show why.

Frazier’s historical perspective mystifies me too. He re-creates the Confederacy’s collapse with verve and frightening detail, but the tone and certain aspects of the story rest on a pretense or a misconception, whichever you prefer to call it. The way Frazier tells it, why, practically nobody in the Confederacy except a few hardheads like Jeff thought that warring against the North was a good idea, which they somehow managed to sell to a credulous populace.

What nonsense. Frazier himself makes clear that the South kept fighting, despite taking terrible punishment, and there were many men who did not desert. Moreover, to suggest that a few misguided souls brought on the Civil War idealizes the Confederacy as a place where fire-eating secession was an anomaly, while also selling short the people who suffered for it. It’s as if nobody back then had any convictions of their own, so were easily manipulated. I can’t stand that implication, which invites us to look down on nineteenth-century Americans as less intelligent than we, less capable of moral reasoning. Hindsight comes in handy, doesn’t it?

Disclaimer: I obtained my reading copy of this book from the publisher via Historical Novels Review.