The best fiction portrays larger-than-life characters as real people, and you couldn’t ask for larger figures than the Borgia clan. Here, the sequel to Blood and Beauty, Dunant gives us a fifteenth- and sixteenth-century pope who raises corruption to a high art, even for the papacy, and two of his infamous, illegitimate children. Cesare’s a murderous, charismatic military genius of absolutely no scruple who terrorizes half of Italy. He also has, shall we say, deeper than brotherly feelings toward his beautiful, younger sister, Lucrezia, whose marriages he arranges and whose husbands he disposes of according to whim. 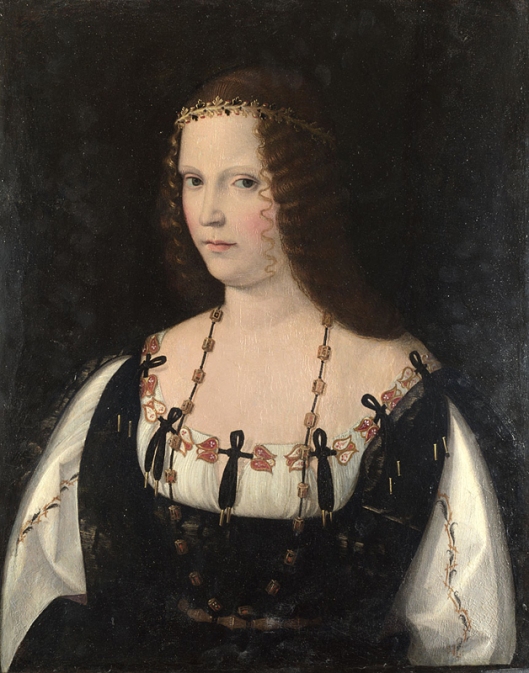 What Dunant does with these remarkable figures–and, by the way, throw in Niccolò Machiavelli, Florence’s envoy to Cesare–is itself extraordinary. I won’t say she makes Cesare sympathetic, which would be asking too much. He’s not the only politician who can wield a knife blade, either himself or by proxy, yet Dunant makes no excuses for his particular brand of viciousness. But she does show his passionate attachment to his sister (the incestuous current largely omitted in this book, oddly enough), and his attempts to end brigandage and corrupt taxation. He even earns the loyalty of certain people, at least those not related to the bodies dumped in the nearest river. Likewise, though his father, Pope Alexander VI, is the definition of venality, he also loves his children deeply, as well as the courtesans who bore them. So he’s a real person too, with a sense of humor, a cheerful outlook, and more avarice than most, but again, not alone, there.

However, Lucrezia holds the center. Only twenty-two but on her third husband, the heir to the dukedom of Ferrara, she’s well aware that she lives in a house of cards. Her presence in Ferrara pacifies the powerful Este family and keeps them grudging allies of the Borgias; the immense dowry she brought doesn’t hurt, either. But her aging father-in-law, the current duke, makes no secret of his disdain for her, and should she fail to produce an heir, the only thing standing between her and a sorry end is Cesare’s army. And Cesare, though he seems never to lose a battle, is dying a slow, miserable death from “the French pox,” also known as syphilis.

Dunant excels at small moments, and she renders her characters’ inner lives with a sure hand, no mean feat when they’re historical personages whose psychology may or may not emerge in sketchy contemporary sources. Take, for example, Lucrezia’s first official meeting with her husband-to-be, Alfonso, who unfortunately shares a name with her predecessor, the one she truly loved:

Noblewomen are early connoisseurs in the art of the courtly kiss, and over these last weeks Lucrezia has been gobbled and pecked, dribbled on and stubble-scraped, has even felt the nibble of teeth and odd teasing flash of a tongue. But this, this, she thinks, is more like a wet dog flopping down onto a hearth. As he [Alfonso] lifts his head, she takes in a lungful of sweat and leather. If perfume has been applied, it is long lost in the dust between here and Ferrara.

Dunant intends to show not only that Lucrezia’s a pawn in the Borgia’s power game, but how all women of that time are invisible except as sex objects. It’s not just that men succeed in labeling women as temptresses, the embodiment of sin, the weaker vessel, and all that. It’s that women are unworthy of serious notice, so that, for instance, medicine hasn’t bothered to study whether men can transmit the French pox to women, and what happens when they do. Or, on a more intimate level, Alfonso and Lucrezia feel strain in one another’s company, yet he sees no reason to learn how to talk to her. Even Machiavelli, who lives to talk politics and history, refuses to do so with his wife, Marietta, whose only legitimate role is to endure his long absences and infidelities.

All this is excellent, sometimes brilliant, even, and always interesting. Yet In the Name of the Family doesn’t quite hold together for me. The narrative depends on episodes, many of which could drop out of the book and leave the plot unchanged. Nothing that Macchiavelli does or says, really matters, for instance. Each episode may keep the pages turning, but they don’t always feel connected, except by chronology, so there’s no crescendo of tension, no climax. The end just peters out.

To an extent, Dunant has little choice, because history doesn’t cooperate with timely cataclysms, and, to her resounding credit, she’s faithful to history. Nevertheless, reading In the Name of the Family sometimes feels like fictionalized history rather than a novel. I still recommend it; I think it deserves wide readership; but I liked Blood and Beauty more.