Imagine that Teddy Roosevelt is telling his life story, and you have the premise of this enthralling, imaginative novel. Simple, yet anything but. Predictable, to a point, if you know the man’s past, yet not really. Maybe I’m more interested in TR than most, having read Theodore Rex, the final volume of Edmund Morris’s biography. And if you asked me which historical figure I’d invite to dinner, TR would be first on the list.

But none of that entirely prepared me for Charyn’s bravura narrative, which begins when our hero is four. The story goes until 1901, when, in the immortal words of Republican fixer Mark Hanna, which don’t appear in the novel, “That damn cowboy is now President of the United States!” So those hoping to hear just how rex Theodore was, in Charyn’s invented voice for him, will be disappointed. 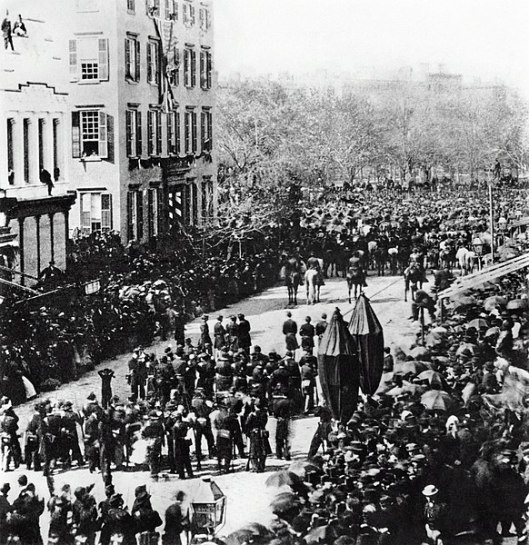 From the second story of their grandfather’s mansion on Broadway (facing the camera), six-year-old Theodore Roosevelt and his brother Elliott watch Abraham Lincoln’s funeral procession in April 1865 (courtesy New-York Historical Society and the New York Times, via Wikimedia Commons)

Never mind that. Cowboy King reads like a dime novel (or so I assume, never having read one). The fabulous cover, one of the best I’ve ever seen, has a mock 15¢ sticker on it. So you know what you’re getting: a rough-and-tumble narrative about a rough-and-tumble life. You see little “Teedie,” as he’s known to intimates, wheezing from asthma, and how his larger-than-life father, known to many as Brave Heart, grabs him and wills the air into his body, bundling the boy up for a breakneck carriage ride around Manhattan at all hours, if a stream of wind is deemed necessary. There’s the boy collecting zoological specimens, never without his pet garter snake, Zeus, in his pocket, activities that shape the future trustee of the American Museum of Natural History and the Bronx Zoo, and the president who preserved national parks as a gift to the nation.

Through these scenes of youth, Charyn shows the man who would later drive himself physically to prove he was no weakling, and whose response to loss or rejection would invariably involve action rather than reflection or emotional confrontation. Hence his two-year sojourn in the Badlands as a rancher and sheriff following a tragic, early death of a loved one, leaving behind an infant child. Astutely, Charyn gives his protagonist disturbing dreams, because the pain will out; these nightmares provide the emotional threads that bind the narrative.

But if TR shies from emotional confrontation, he relishes the other kind, and not just in the Badlands. In this tale, Teddy, having boxed bantamweight at Harvard, readily trades blows while building his New York City political career, battling henchmen and even kingpins of both Democratic and Republican machines, a dangerous hobby. Whether this is real or dime-novel legend, I can’t say, but you do get the pugnacity, the preference to go down fighting rather than be anyone’s pawn.

Interestingly, TR’s charitable impulses lag well behind his hatred of corporate or political bosses. Brave Heart, who tries to teach him greater generosity, has set up a house for orphans who become newsboys, and he’s forever watching out for them, to Teedie’s chagrin. And when the young man comes rushing back from college at the news of his father’s imminent death, he finds this scene:

There was an ominous vigil in front of the house; a hundred newsboys stood waiting in the slush and snow, cap in hand, like a choir robbed of song.… They were each clutching a candle, every one. The flames flickered in the wind and revealed their unwashed faces with a crooked glow. Their pockets were loaded with coins, I could tell. They’d come right from their routes to Papa’s vigil with penny candles. They didn’t cry… The newsies swayed with their candles that burnt down to a nub. I cursed their devotion to Papa. It frightened me. But I could hear their silent chorus.
Too late, Teedie, you’ve come too late.

For all these marvels, Cowboy King’s a little too clean in its presentation. You don’t see TR’s credo of the triumph of the “Anglo-Saxon race,” his belief in eugenics, or his mistrust of immigrants, the “hyphenated Americans,” whom he thought should assimilate as quickly as possible. You don’t see his efforts to provoke the Spanish-American War, though other characters blame him for that. But this isn’t nonfiction. It’s how TR might have narrated his life before becoming president, given a cigar, a fire, a comfortable chair, and a willing audience. I’m there.

Disclaimer: I obtained by reading copy of this book from the public library.