As a cop, Detective Willi Geismeier has a steady job, something many people envy in the Munich of 1920. The collapse after the Great War has left Bavaria a wreck, like every German province. Munich is a city of desperation, destitution, theft, political gang violence, and hopelessness. The central government in Berlin struggles to keep the nation afloat, while there are many who wish to drag it down and seize power; Munich possesses more than its share of revolutionaries.

This is where Willi’s job becomes difficult, if not impossible, for so many crimes have political motivations, and ultranationalists have Munich’s judiciary in their pockets. Hard as it is for most people to credit, the most threatening movement, really a ragtag mob of thugs, hangers-on, and a few ultranationalist businessmen, calls itself the National Socialists. Its leader, who seems utterly disreputable and incompetent, is Adolf Hitler. 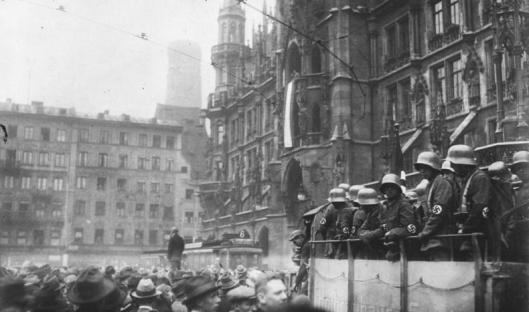 Willi’s involvement in these deadly currents begins when unidentified assailants throw a grenade into a newspaper office, killing or wounding some journalists working there. You might think that such a crime could not have taken place without multiple witnesses; yet somehow, the leads quickly grow cold. But Willi, recognized as Munich’s best detective, doesn’t give up, because he’s a thinker first, before he’s a civil servant, and he’s studied his Shakespeare:

Willi had learned from the English bard that lawful human behavior followed well-mapped social patterns. Every crime was a unique moment in human history, where human psychology and behavior ran off the rails in a very particular way. When you looked into crime thoroughly and deeply, as Willi had, it revealed dark, as yet uncharted corners of the human soul. Criminal activity oozed through civilization’s unmapped dark alleys in ways that were surprising, illuminating, and, for Willi, irresistible.

No one trusts Willi, because he follows his own nose rather than instructions, which scares everybody in times like those. What’s more, when enemies try to trap him, he never lets himself be pinned down. He’s a survivor, in other words, and you sense that no matter how relentlessly his superiors try to push him under, he’ll bob up somewhere else. Indeed, while the most ambitious members of the police sign on with the National Socialists, Willi keeps his own counsel (and a private cache of incriminating documents). For starters, he interviews Sophie Auerbach, a reporter badly injured in the newspaper bombing, and Maximilian Wolf, an artist with a remarkable facility for drawing quick portraits. From then on, the case never goes cold.

The Good Cop is an absolutely terrific, stunning book, but not a classic thriller. There’s no condensed time frame that circumstances shorten even further; the narrative covers more than twenty years. Consequently, the “no — and furthermore,” instead of getting in the characters’ (and, therefore, the reader’s) faces, haunts the background in ever-increasing ominousness, mirroring the Nazis’ rise to power. As such, Willi’s investigation progresses in fits and starts over time, fulfilling the proverb about the wheels of justice grinding slowly, and is all the more believable for it.

At every step, Steiner creates an atmosphere so chilling, you have a ringside seat at the prizefight between lunatic thuggery and civilization — and many who subscribe to the latter don’t even recognize they’re about to be pummeled. You see how the Party attracts sadists, ideologues, petty nationalists who blame their own troubles on others, the not-terribly-bright ordinary Joes, all of them on the make. Meanwhile you also have the Munich of prostitutes, legless veterans, picket lines, storm troopers, and businessmen in fancy cars.

Steiner’s narrative can sound didactic, and you can tell he’s written the book with a cause. Even so, he knows his history, and you never doubt that what you’re reading either could have happened or actually did. He further understands how that history resonates. Not for nothing does he have the Nazis say, “Make Germany great again,” or refer to “fake news” and its purveyors, while the crowd chants, “Lock them up!”

The Good Cop tells a gripping tale, a thriller that makes you think. I highly recommend it.